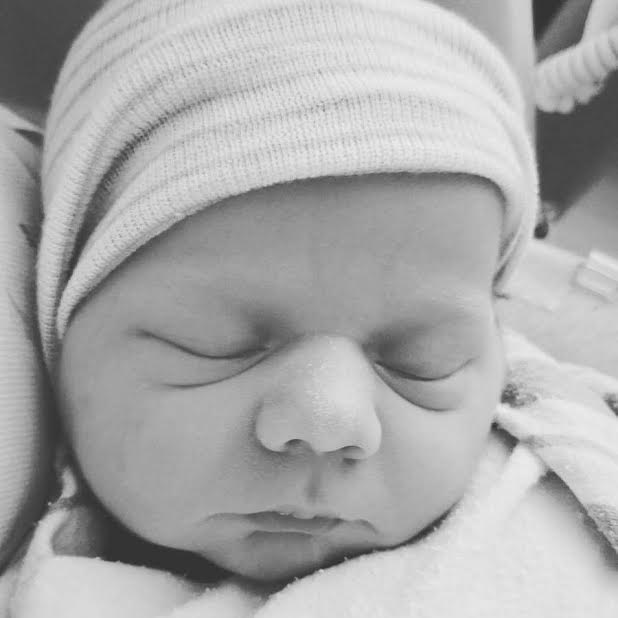 M and J started care with me in the first trimester of their first pregnancy.  I had known M for a few years through the hard years of infertility and working through IVF.  She wanted a home birth.  There were a couple things in her health history that were not best to be manged by a midwife, so we made the plan that we would co-manage care and M would have an OBGYN as well so if an issue, induction or transport (in labor) would become necessary, she was set.

M’s blood pressure began to creep in the 37th week.  She began seeing an acupuncturist which lowered her blood pressure.  We made the plan to naturally begin to try and get labor started around 38 weeks since we knew it would be better for her to try and get into spontaneous labor sooner than later.

The acupuncturist began working on labor inducing points, and M came in at 38 weeks for labor encouragement with me.  Everything looked great on mom and baby!  She was 2cm dilated, 60% effaced, and baby at a -2 station.  I swept her membranes, and had M drink an herbal tea blend.  I recommended they go for a walk when leaving my place.  Our hope was that M would be in labor in the next 48 hours.

Around 11:30pm on May 5th, M and J were heading to bed.  They put come clary sage in the oil diffuser.  M stated she had five very powerful contractions, and then her water broke at 11:55pm.  I recommended that they try to get a nap before active contractions hit.

Contractions became strong at 130am on May 6th.  Within an hour, J sent me a text that M was ready for me to come.  I arrived at 245am and found M swaying at her bedside.  Contractions were coming at very regular intervals, approximately every 3 minutes, lasting a minute long.

I did lift and tuck for ten contractions using the rebozo at 330am to help strengthen and intensify the contractions.  R, my apprentice, arrived, and got to work on making the labor tea that M’s acupuncturist sent for her to drink in active labor.

M moved to laboring on her hands and knees, while I provided counter pressure to her back.  I began administering a homeopathic to M to help with back pain.

As 5am neared, M labored on her right side to help get some rest in between labor waves.  She was doing an excellent at hydrating and staying nourished.

I sent M’s chiro a text at 7am asking if she would come to do an adjustment to help move things along.  She agreed, and was planning to arrive around 8am.

I did an exam at 730am and found M to be 5cm dilated, 80% effaced, and baby at a 0 station.  I talked with M about considering to do open knee chest for 40 minutes after she got adjusted from her chiro.

M’s chiro arrived at 745am, and got to work.  She worked on M for awhile, trying to help with M’s discomfort and helping her to open up to let baby down.

M got into open knee chest at 810am.  It is a brutal position, but M was trooper and stayed the course.  We did an exam at 9am, and there was no change.  M got into the birth pool a few minutes later to help with relaxing, laboring on her knees.

M moved to laboring in the shower at 1015am.  She moved around her room.

I listened to the baby at 1050am, and I caught a pretty significant decel through two contractions.  M and I had an agreement that her labor had to be spotlessly perfect to stay home.  We discussed transporting to her OBGYN.  M and J agreed to the plan.

We left for the hospital a little after 11am.  Baby sounded fine in between contractions at this point, and decels were not as deep during.  M and J went back to triage at 1150am, and got moved to a labor room an hour later.

M did a phenomenal job continuing to cope through her intense labor pains.  J and I stayed at her side, alternating support.  The staff had M on monitors to watch her contractions.

It was decided around 3pm that M would need some pitocin to strengthen things.  M decided she would like to get an epidural before pitocin was begun.  An epidural was placed around 345pm.

M took a little nap for a bit.  Then we worked on alternating positions in the bed best we could.  M was blessed with great nurses who were proactive at trying to help her have a vaginal birth.  Pitocin was increased every 15 minutes to strengthen contractions.

At 630pm, M was 6cm dilated, 80% effaced, and baby at a 0 station.  We had a good time around this point, adding things to the “goal list” that the hospital had on a door, which brought a lot of laughter to all.

M’s evening nurse brought in the peanut ball to use to give the baby some room to maneuver the pelvis and move down.

M was beginning to feel pressure as the end of the evening rolled on.  She felt that the baby was moving down.  It was decided that M would be checked at midnight, May 7th.  M was 7cm dilated, 80% effaced, and baby at a 0 station.  The OBGYN on call began talking to M about a cesarean delivery at this point.  M did not want a cesarean at all, and wasn’t feeling ready to make that decision.  I encouraged M that her baby was not in any distress at this time, and she could take all the time she needed to make the decision she felt was best.

The doctor ended up in another cesarean, so that gave M a couple more hours.  M decided if she hadn’t made enough change, she was ready to meet her baby and have a surgical birth.

As 2am neared, M began feeling some pain in the top of her fundus.  In hindsight, we have a better of idea what was going on, but in the moment we weren’t sure.

M was checked and found to be pretty close to the same.  M and J felt at peace that she had labored a long time, baby was having some variable decels for awhile, and it was time to meet their baby.

The nurses began prepping M for a cesarean.  I stayed with her until she was wheeled back to the OR, with the plan that I would come back in the morning when they were in a room.

Sweet Noah was born earthside on May 7th, 2017 at 320am, weighing in at 6lbs 13ozs and so wrapped in his cord that we swear he must be a gymnast.  M’s uterus was so thin from the labor that during the surgery, her uterus tore and caused some complications.  We assume that the pain M was feeling was her placenta being tugged from the fundus as sweet Noah tried to come down more, but couldn’t since he was wrapped in his cord.

M was amazingly powerful through her difficult journey.  I admire her strength and perseverance while she worked to meet her baby.  Her baby that she worked many years to have.  A woman’s strength is beautiful and never stops amazing me.  #sacredjourneymidwifery