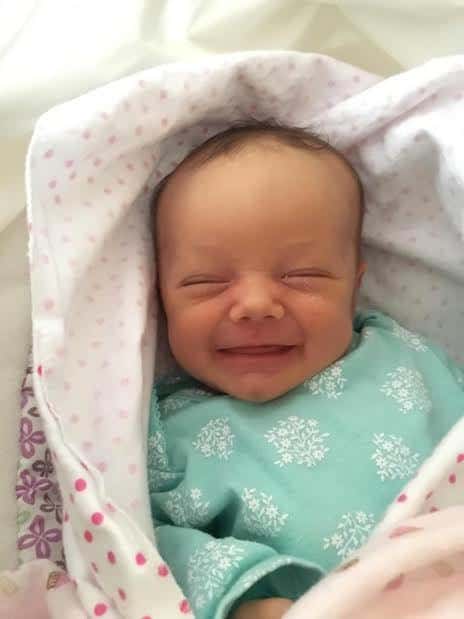 R and P started care with me in the first trimester of their first pregnancy.  They were such a sweet couple who had so much joy and excitement over every pregnancy sign and symptom.

R’s pregnancy progressed along without any concern.

At 40.4 weeks, R had an ultrasound and we decided we might need to do some things to naturally get labor going since the ultrasound showed us a couple of minor concerns.  We made a plan for R to come see me the next day.

That evening, contractions starting coming every 10-30 minutes, and would wake R from her sleep.  It seemed the labor journey was beginning. I encouraged R and P to get some sleep and to let me know if things became more active.

The next morning R called me.  She said the contractions were still far, but she felt panicky when she had them and realized she was fearful of the pain.  My apprentice and I went over there and chatted with R and P about her fears and used some essential oils to help with what was going on.  R felt more encouraged by time we needed to go.  I swept R’s membranes.  Her cervix was 3cm dilated, 90% effaced and baby at a -1 station.

Contractions picked up that afternoon.  When I finished seeing patients for the day, I went over to check in on R and P.  Her contractions had been 3-7 minutes apart, but when I got there they were 3-4 minutes apart, lasting a minute long and seemed strong.  R was leaning on her kitchen counter, eating yogurt while blowing through contractions.  R and P said the contractions hadn’t been that close or strong until I arrived.  Her cervix was 4cm dilated, 100% effaced and baby at a -1 station and the baby’s head felt acynclitic.  She had a very bulgy bag of water in front of the baby’s head.  I talked to them about me heading back home and when I would come back and R became emotional.  R said she felt safer with my presence.  After chatting, we decided I would go home to eat dinner and change and would return in an hour or so.  P and I got R resting in her recliner, and then I headed home.

I returned a little before 9pm.  R’s body told her to move and every few minutes we were trying a different position.  R would lay on her left, then moved to kneeling, then she would stand.  I gave her counter pressure on her lower back through the labor waves which were coming every 2-3 minutes, lasting 45 seconds.

R’s doula arrived a little after 10pm.  R was in her bath tub for comfort.  The nausea was very strong at this point, and it wasn’t long and the vomiting began as well.

After getting out of the tub, R labored on her feet for awhile, but was getting tired.  Her labor journey had been very emotional for her thus far, and it was beginning to wear on her physically.  R was comfortable in the recliner, so we got her comfortable and encouraged her to close her eyes and rest in between contractions.

Midnight came and we discussed doing another exam.  There had been no change.  The cervix was stretchy and the bag of water was very bulgy.  R felt emotional about the exam.  We discussed different options of things we could try and do.  After we talked, R and P decided that the option they wanted to try was breaking her water since it seemed possible that the fluid in front of the baby’s head could holding things up.

I broke R’s water at 12:30am, and we got to work.  R’s doula taught P how to do the abdominal lift and tuck with the rebozo and we all encouraged them to do the lift and tuck for ten contractions.  Contractions were coming every 2 minutes, lasting 30-45 seconds.  R’s pulse was slightly elevated, so between every contraction or two, one of us would hand her drink and encourage her to take a sip.

R moved back to the recliner around 130am to try and rest between contractions.  The waves were coming every 3 minutes, lasting 50-60 seconds.

During the 2am hour, my apprentice had R try some different positions.  R squatted through some contractions, then did lunges and hip circles.

We started to fill the birth pool as the contractions seemed to be more intense.  R got into the birth pool a little before 4am.  R was too nauseated to eat, so the birth team fed her spoonfuls of honey here and there for energy and continued to give her fluids for hydration.

R sat in the birth pool and enjoyed the warm relief the pool brings.  R talked with me that she was feeling anxious about the pain getting worse.  We decided since it had been several hours to do an exam and hopefully that would encourage R.  R was 6cm dilated, 100% effaced and baby at a +1 station.  The anterior portion of the cervix was swelling and I told R that I had a position I would want to try with her out of the birth pool in a little bit that I was sure would help with the swelling.

I gave R a few doses of an herbal tincture that helps to calm, and it seemed to help.  For the next hour, R labored in the birth pool, alternating between sitting and leaning over the side of the tub, moaning gently through labor waves.  Contractions were coming every 3 minutes, lasting 50-60 seconds.

R needed to go to the toilet around 520am, so we used it as the perfect opportunity to get R to try the position we needed.  She was very reluctant, but the four of us got R to try open knee chest.  R moved to the bed in the open knee chest position at 530am.  Her doula provided counter pressure, and I positioned myself beside her to be a continual encouragement as the position is less than pleasant, but very effective.  R was so strong through the position, and focused on me through each labor wave.

R got up to try the toilet at 630am and requested an exam after that.  She was now 8cm dilated and the swelling was completely gone.  R was feeling pressure at the very peaks of the contractions.  R sat on the edge of the bed for a few contractions, snacking on a lara bar.  I thought of a homeopathic to try to help with the nausea and dry heaving and after two doses, she felt so much better.

R got back into the birth pool in a kneeling position as 730am drew near.  She was sounding primal, and her doula helped coach her to keep low tones.  The pressure intensified, and at 757am R was spontaneously pushing.  We could see the head showing on the perineum at 801am.  R listened so beautifully to her body, pushing and bringing her sweet baby closer earth side.

R birthed the head at 814am.  Baby girl had a double loop of her umbilical cord around her neck that I very quickly realized was much too tight to unloop, but also was prohibiting her from being born.  I had R stand up and my apprentice hand me the clamps to cut the cord.

Just as I was about to clamp, R shifted and out baby girl came at 816am.  I unlooped the double cord around her neck and the loop of cord around her shoulder and brought her to R’s awaiting arms.  I stimulated her with a towel and suctioned her mouth, and soon baby girl was crying for all to hear.

Welcome to the world sweet Alesia, born earthside on September 10, 2016 at 816am, weighing in at 6lbs 8ozs, 19.25″ long.  Her mama was amazingly strong through her intense labor to bring her baby girl into the world in the way she had hoped and imagined.  She persevered and got her sweet reward.  Such a joy to serve this family through their first pregnancy and birth.