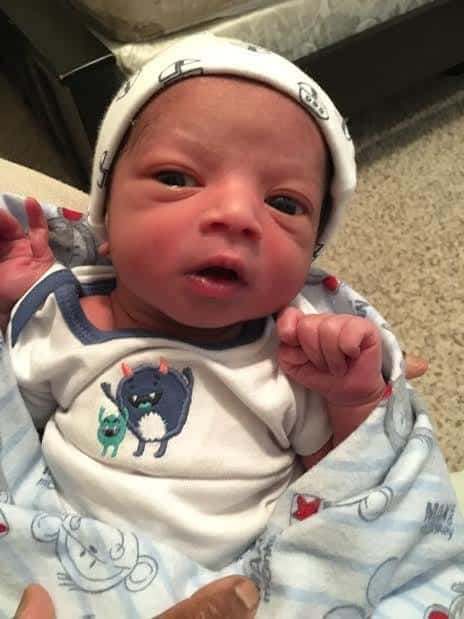 F and G began care with me late in the third trimester.  They had received care through an OBGYN, but felt more and more red flags as they worked through their childbirth class.  Their childbirth educator is a past patient of mine and recommended they interview me.  We met for a consultation right before I was set to go out of town.  We made plans to connect once I got back in town if they should want to transfer care for a home birth.

I heard from F and G a couple days after I got back in town and we made plans for them to come in for their first appointment that afternoon.  They had just entered the term window so I wanted to see them and get records and go over what they needed to get for a home birth.  We made plans for my home visit in a few days and they planned to order their birth kit that evening.

The next morning G sent me a text letting me know they were pretty sure F’s water broke at 537am.  My initial thought was of course it did.  Only a first time mom that was transferring late would have her water break in her 37th week!  The irony!  I talked to them and we made plans for them to come to my office in an hour.

F and G arrived around 830am and I did an assessment.  Her water was definitely broken and I was able to get out a decent amount of clear fluid out and baby became more applied to the cervix.  F’s cervix was 2cm dilated, 80% effaced and baby was at a -1 station.  Baby was in a great position for labor.  I made F an herbal mix of red raspberry leaf tea, black and blue cohosh and honey.  I had a spare birth kit and was able to locate a pool liner since they had not received their kit yet.  I recommended they go by the store for snacks, supplies and a walk and then go home and try for a nap before active labor was upon them.

F was able to take a decent nap for a couple hour, with waves coming every 10-15 minutes.  Around 215pm she got up and began walking around as I recommended.  Contractions became frequent and hard quickly.  G asked me to come at 330pm, so I headed that direction shortly after.

I walked in around 450pm and could see that F was working very hard.  She was standing, leaning against her bed post, her grandmother (who came all the way from South Africa to support her through her first birth) at her side rubbing her back.  Vitals looked great and a little after 5pm we did an exam.  F was 6cm dilated, 100% effaced and baby was at a 0 station.  I told G I was going to get the birth pool filled with air while he got the hose hooked up.  I knew F would like the pool soon.

It didn’t take much time at all and we had the pool up and filled.  F moved into the birth pool right at 6pm, feeling like she could catch her breath from the labor waves.  F snacked on dates and green juice in between contractions to keep her energy up.  Her contractions seemed to be coming every 2.5 minutes, lasting 90 seconds while in the pool.

The pool helped provide some comfort.  F listened to her body and moved her position as it felt good.  She labored sitting for a few waves, then moved to her knees.  She got into a semi reclining position and was able to close her eyes and rest in between contractions.  I gently encouraged F through her waves, which were becoming stronger now.

After a few pushed I did a gentle exam and found F to be completely dilated and effaced and baby at a +2 station.  Contractions spaced a little during pushing, coming every 4-5 minutes, lasting 90 seconds, giving F enough time to close her eyes and build her strength for the next wave.

A few minutes before 8pm, the head began peeking on the perineum.  We could see his beautiful dark hair and encouraged F about the progress she had made.

Baby boy started what became the epicly long crowning process a few minutes passed 8pm.  Contractions were spaced, but with each wave F was moving a little bit more of his head out.  Baby sounded perfect and we encouraged her that with the long crowning that her perineum was stretching perfectly to help decrease tearing.

After quite a while of crowning, the head was birthed.  I found that baby had a nuchal cord that I unraveled before F pushed out the rest of the body.  As I brought him to F’s chest, I discovered what most likely was the culprit for the long crowning phase, a short umbilical cord.  I gathered that he took his time, waiting for the fundus to move down enough to give him enough cord to be born.

It was such a privilege to support this sweet family as they welcomed their first child into the world.  F labored beautifully, working so hard bringing her sweet boy peacefully into the world, in the comfort of her home.