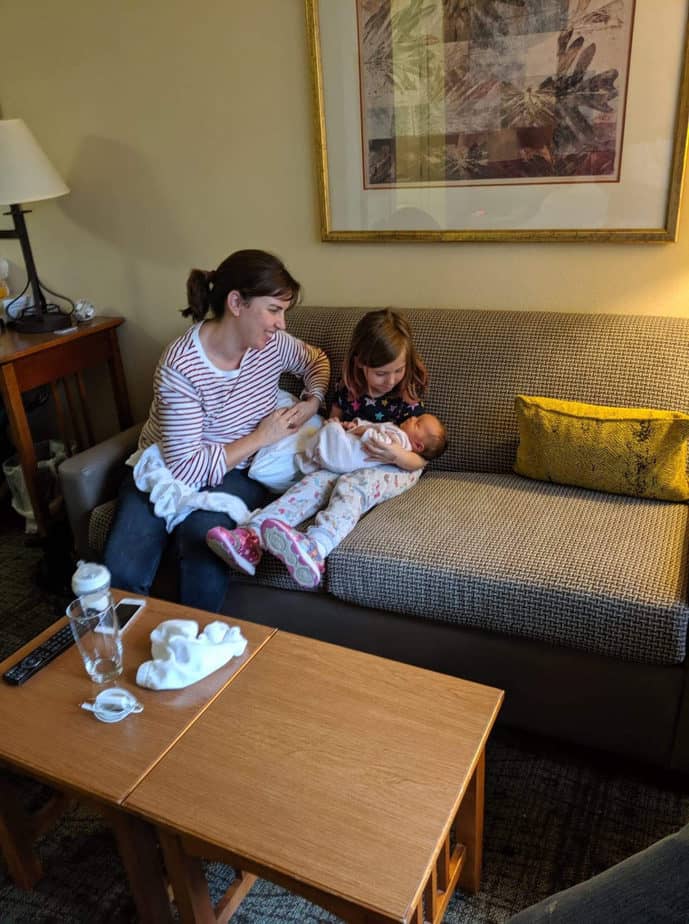 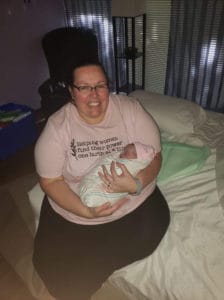 A started care with me in the first trimester of her pregnancy.  A’s story is unique, as her journey is her second surrogate journey.  You can read about A’s homebirth of her last child here, her homebirth from her perspective here, and her first surrogate journey here.

A’s first trimester was a little bumpy as she had spotting to light bleeding off and on the entire trimester from a subchorionic hemorrhage, and feeling off from her erratic thyroid levels.

The parents of the baby actually lived internationally, and were set to come in when A was 37.5 weeks, which we all thought would be a safe time to come to the area.  So imagine our surprise when A called around 6am on September 10th, 2019 at 37.2 weeks stating she was pretty sure her water had broken.

My first reaction was for her to immediately try to reach the parents, as flights from Europe would no longer be coming out this way before long.  Unfortunately, the parents weren’t reachable for a bit, and could not leave until the next day.

A came over around 800am for an assessment and for some herbs to encourage labor since she was GBS positive, and we needed to have a baby within 24 hours. A was 2cm dilated, 50% effaced, and baby was at a -3 station.  I started A on some herbs, and did a membrane sweep.  I sent A and C on their way, instructing A to eat breakfast and take a walk.

Things quickly started, and A began having regular contractions with some intensity at 9am with contractions coming every 2 minutes, lasting 45-60 seconds.  It was soon decided we should head towards the birth center.

Due to the agreement made in A’s surrogate contract, A had to have the baby in a birthing center.  Shout out to Patty Ghaly at Cy-Fair Birthing Center for allowing us to use her center.

We arrived at 11am, and did A’s labor assessment vitals.  A began to do some position work with her doula J.  J performed counter pressure off and on during contractions to provide relief.

A was resting on the bed as 1230pm neared, laying on her right side.  She was starting to feel some pressure at the peaks of the contractions, and was moaning gently with the waves.  The birth team was working on getting the birth pool ready.

As 1pm neared, A got into the birthing pool, laboring sitting with her knees crossed.  Transition was upon her.  A is a funny person anyway, but she continues on in labor.  In between contractions, A would be chatting away with us, and then a contraction would cause a pause in conversation, and then she would pick right up mid sentence after the contraction passed.

We were encouraging fluids in between contractions.  A was commenting about increased pressure with contractions.

A moved to semi reclining.  As is normal for some women in labor, she became nauseous and vomited.  What makes this humorous is a couple contractions after vomiting, she asked for some gum.  Doula J gave her a piece of gum.  A couple contractions passed, and A stated, “This is the best gum I have ever had.  I can’t even taste throw up in my mouth.” and went on about how the company needed to make an ad for being the best gum for refreshing vomit breath.

At 210pm,  exclaimed, “I am pushing!”  Spouse C called the parents on video chat so they could see the birth.  In between contractions, A kept reassuring the parents that everything was normal and okay, which made us all laugh.

When baby was ready to come, things went quickly.  The baby was crowning at 235pm, followed very quickly by the head.  The cord was wrapped around the neck twice, which we unraveled as the baby was born into the water earth side.  She was here. 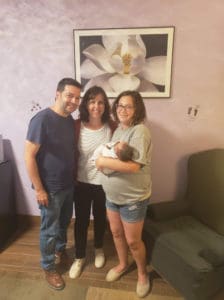 It was such an experience to see the reaction of the parents long waited and hoped for rainbow baby, and so sad that their sweet girl was 24 hours old before they got to hold her and see her live for the first time.  Such a beautiful experience, and beautiful gift that A provided.

Thankful to have gotten to work with A again, and if she ever donates her uterus to “friends and family” as she said she may do down the road, I will look forward to it again.