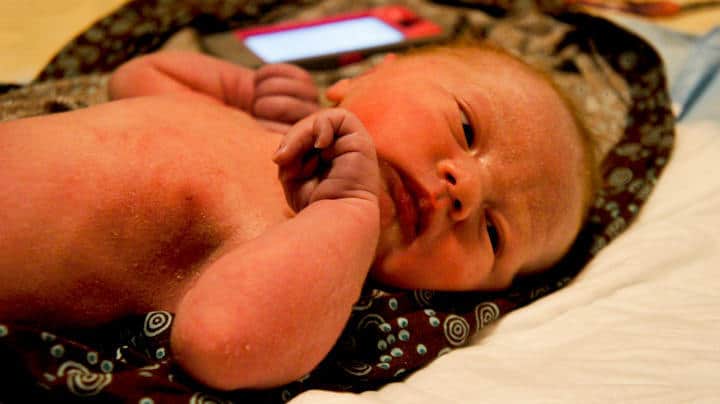 A and W came to me for their first appointment at 21 weeks along in their pregnancy.  They just came home on furlough from the mission field and were planning to have a home birth stateside.  A was also a midwifery student.  She attended a couple births with me to get a feel for home birth in the US while still pregnant. A had a beautiful pregnancy.  Her anatomy scan she had overseas stated she had a low lying placenta, that moved perfectly in the third trimester. A came to see me at 38 weeks.  It was October 15 and it was the day that A and W had been praying that Asher would be born.  A had been having a lot of cramping and contractions all weekend.  We did a cervical exam and found A to be 2cm dilated, 60% effaced and baby at a -1 station.  Per A’s request, I did a membrane sweep. A and W took their toddler down to Galveston that afternoon to keep busy and not think about when labor would happen.  Contractions started back up at 7pm.  I later found out A drank castor oil.  Luckily it worked for her.  Castor oil is not one of my top recommendations. The castor oil helped kick things into gear.  Contractions progressively got closer and more regular.  By 2am on October 16th, A called and stated contractions were every 2 minutes, lasting 30-40 seconds and she would like me to come.  It was obvious that things were intense.  Barely a sentence could be said, and another contraction wave would begin. In prenatal appointments, A told me about how her contraction pattern went the last time.  That things started fast and furious, but contractions were all over the place in length and duration.  This labor pattern proved to be no different.  I arrived at 3:40 to find A talking in between, but as soon as a wave would start the moaning would begin and she would move onto her side in the bed.  Contractions were every 2 minutes, lasting 50 seconds. A asked for a cervical check immediately.  We found that she was 6cm, 100% effaced and baby engaged at a 0 station.  Good change in a matter of 12+ hours! The next couple hours, A continuously changed her position.  One moment she was side lying.  The next standing.  Then in hands and knees.  And then knee chest.  She was very in tune with what she needed to do to get through each contraction. Ten minutes until five, A stated she was starting to feel some pressure.  Quarter after five A asked to be checked again.  She was know 9cm, 100% effaced and baby was at a +1 station.  Contractions were lasting longer, only giving A thirty second breaks before the next wave would begin. A few minutes before six, A asked me to check her again.  Found her cervix to be the same.  The cervix was completely gone on the right side, but still thick on the left. With her first baby, A had to have her water broken.  This was on her mind continuously during the end of her labor.  A few minutes after six, she stated the pressure was becoming unbearable and she would like me to rupture her membranes.  At 6:10, I ruptured A’s membranes and found her to have just an anterior lip of cervix.  Fluid was clear and baby sounded beautiful during the breaking of the sac.  A requested I hold back the cervical lip.  One contraction and lip moved over baby’s head.  At 6:15, A was spontaneously pushing. A had planned to deliver in her bed, but while pushing, her body wanted to push in a squat on her bedroom floor.  As midwives, we are ready for delivery no matter where mom decides to push.  We grabbed a shower curtain and threw it out on the floor to protect the floor for delivery. At 6:26, baby was at a +3 station.  With her first baby, A mentioned pushing for a long time, and was quite relieved that this process was going much easier this time. The head began to crown at 6:28, and the head delivered at 6:32.  The baby had a nuchal cord, which is where the cord is wrapped around the neck.  The cord was wrapped around twice and was snug.  My birth assistant was on one side, and I on the other, and together we caught the baby as he came earthside at 6:33am and somersaulted him out of his cord.  Sweet Asher not only had the cord wrapped around his neck twice, but also had his body wrapped in his cord.  A brought Asher to her chest.  He was here! The postpartum period went beautifully and A stated she felt great.  Asher nursed like a champ and big sister E loved her baby brother. Such an honor to have been part of Asher’s birthing journey.  Welcome to the world sweet baby Asher!  Born on October 16, 2013 at 6:33am, weighing in at 6.15#, 20″ long.