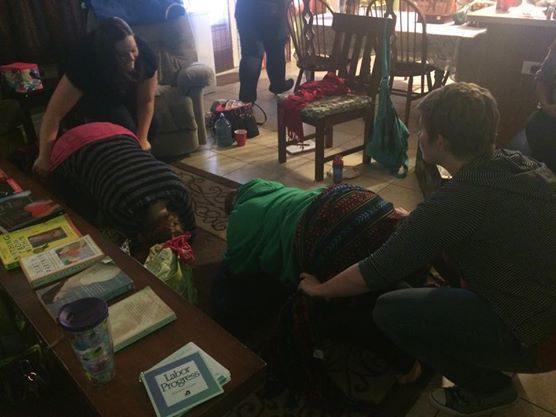 J and B started care with me at 13 weeks along in their first pregnancy.  J and B had been surrounded by lots of people in their families who had unmedicated deliveries, home deliveries and came quite educated and prepared for their home delivery. Pregnancy went along perfectly.  At three days past J’s estimated due date, J began having regular contractions in the night coming every 8-10 minutes.  Today was J’s set appointment day, so I told her to keep it and we will see how things are going. J arrived for her appointment, and contractions were now steadily coming every 4-6 minutes, lasting 40 seconds.  J requested a cervical exam and I found her to be 2cm dilated, 90% effaced and baby at a 0 station.  Cervix was very soft, but also posterior.  I wrapped J’s belly and sent her home with my moby, encouraging her to wrap her belly every couple hours for 15-30 minutes, and was certain I would be seeing her that evening. J noticed here contractions changed around 530pm, becoming closer, longer and more intense.  Around 7pm she requested I come over. I arrived before 8pm and found J in good spirits, rocking on her birth ball.  Contractions were 3-3.5 minutes apart, 50 seconds long.  J soon moved to the bed, where she stated the contractions felt better.  Baby sounded perfect, and I noticed contractions seemed to space when she was in the bed.  J stated contractions felt most uncomfortable when she was standing.  I suggested to J that she wrap her belly and try standing and moving around for 30 minutes or so and see how the contractions felt from there. The waves became much stronger.  B provided counter pressure during the waves to give J some comfort.  In between, J was her beautiful, happy self.

Close to 9pm, I checked J’s cervix and found her to be 5-6cm dilated, 100% effaced and baby at a + station, a small amount of bloody show on my glove.  I told J she was doing perfect and things were moving along perfectly. I suggested to J to try the captain morgan position for three contractions on each leg to help baby move her head and move down.  It caused a wave of nausea to come over J.  I could tell things were moving along. After awhile, J moved to laboring on the toilet.  Contraction waves became stronger, and J began moaning gently with surges.  The birth pool was filling with warm water, as we knew J would be ready for the pool soon. At 1040, J moved back to the birth ball and began rocking her hips on the ball.  It wasn’t long and J stated she was beginning to feel pushy at the peaks of the contractions. At 1111, J got into the birth pool in a sitting position, moaning through surges.  After a couple contractions, she moved into hands and knees and began instinctually listening to her bodies demands.  B continued to provide counter pressure through the surges.

Soon it was 1130, and J was hit with another powerful wave of nausea.  J moved into a semi reclining position, leaning into B.  At 1138, I found J to have a lip of cervix and baby at a +2 station. A few surges passed, and J began grunting through surges.  As normal for many women at the end of labor, J looked at us and said she didn’t think she could go on much longer.  A couple minutes later, I found J to be completely dilated.  With the next contraction, J began pushing as she felt natural. Two minutes passed midnight, J’s water broke spontaneously.  Baby’s heart rate soon started having some waves of decelerations.  I asked someone to grab my rebozo and suggested we try tug of war pushing to help J get the baby out faster.  After a couple switch arounds of people with the rebozo, my birth assistant took the rebozo and began doing tug of war with J while I listened to the baby and gave J pressure to help push.  The pattern of tug of war was working well, and soon we could see some hair on the perineum.  I continued to listen to baby continuously through out the process. At 12:34am, baby’s head was on the perineum.  With the next surge at 12:37, the baby’s sweet head was crowning.  J did an excellent job of holding the baby at the perineum, allowing stretching to take place.  The head was birthed at 12:39am, where I unlooped the nuchal cord over the baby’s head.  The rest of the baby followed at 12:40 am, and J brought her sweet baby to her chest, where she let out a spontaneous cry.