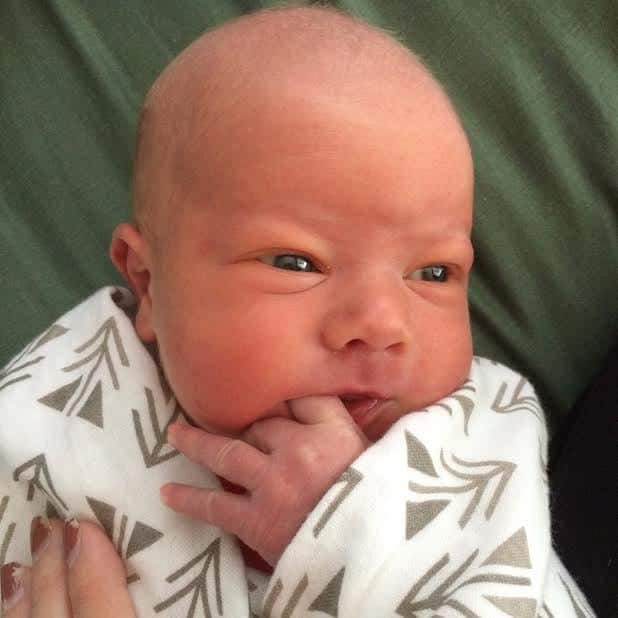 T and P started care with me in the first trimester of their fourth trimester.  T had home births with her three previous babies and was looking for something different with this pregnancy and birth.

Early in the afternoon on November 3rd, three days before her due date, T sent me a text letting me know she was having contractions more regularly that felt different than what she had been having.  She was heading to a store to walk with her sister in law and see what would happen with her contractions.

At 3:15 T sent a text saying she was worried things would stop, but she did have a handful of contractions that felt much stronger and she was certain that this had to be labor.  I told her I was going to head her way.

While on my way, T let me know that her water broke at 3:26pm.  The contractions got a little stronger once the water was gone.

I arrived right before 4pm and found T laboring on her birth ball. All vitals were normal.  T asked to be checked.  I did an exam at 4:18pm and found T to be dilated to 6-7cm, 100% effaced and baby at a 0 station.  The birth pool was almost ready at this point so I had T move around for a few contractions before getting into the birth pool at 4:23pm.

Things quickly moved into transition from there.  T labored with so much poise and strength as her labor waves got stronger and the pressure became more intense.  P sat at her side, holding her hands and encouraging her through the journey.

T began to spontaneously push at 4:59pm.  She could feel his head on her perineum at 5:07pm.  I helped with trying to prevent tearing as the baby began to crown and birth his sweet head at 5:09pm.  A minute later, T pushed her sweet boy out into her awaiting arms and brought him to her chest.

Augustin looked around at his parents, but needed a little help getting the right idea about breathing.  After a few puffs of air, he spontaneously cried and let everyone know how he felt about being earth side.

Welcome to the world Augustin, born earth side on November 3, 2016 at 5:10pm, weighing in at 9lbs 6ozs, 20″ long.  It was such a blessing to help this couple welcome their fourth baby into the world.