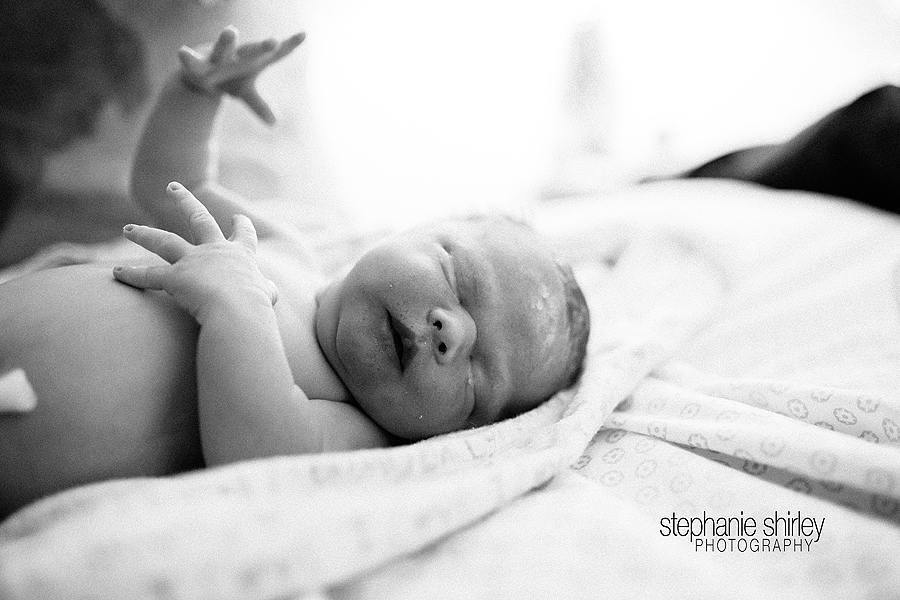 S and D started care with me in the first trimester of their third pregnancy.  They had their previous two babies at home with me.  You can read S’s previous home birth stories here:  Brantley and Kinsley

When S started care with me, she knew I was scheduled to leave on vacation one week before her due date.  I wasn’t concerned since she had never delivered anywhere close to her due date in the past.  As it got closer, S was feeling nervous.  In her words, postpartum is rough the first couple of weeks, and she really felt like she needed my physical presence in the area for a couple weeks after she has the baby.  She asked me if I would try to encourage her labor at 38 weeks.

8am March 5th, I had S come over for a membrane sweep and some herbs before I went to church. S was 3cm dilated, 70% effaced, and baby at a -1 station.  I swept her membranes, and gave her some herbs.  We anticipated this little guy would most likely be her biggest baby, as I felt he was around 8.8#.  I encouraged S to eat breakfast, take a walk, and keep me posted on how she was feeling.

Contractions began fairly soon after the sweep.  S went for a walk around her apartment complex, the intensity of the contractions varying.  I decided I would stop by once I left church, arriving around 130pm.

I found S sitting on the edge of her bed, having what appeared to be mild contractions.  S felt that my presence alone was making her contractions stronger.  I did an exam at 2pm and found her to be 4cm dilated, 80% effaced, and baby at a -1 station.  I swept her membranes.  She had not eaten in awhile, so I encouraged eating, and when having contractions, I wanted to do the abdominal lift and tuck with the rebozo for ten contractions.

Contractions began to really pick up, coming every 2-3 minutes, 60 seconds long.  S started to wiggle around with the contractions, while I did the lift and tuck.

She sat on her ball for a few minutes, taking some bites of her pulled beef sandwich and fruit.  She was becoming vocal with contractions, telling me she remembers this horrible pain, and that it was “hurting too bad.”

S alternated her position through the 3pm hour, as the birth team slowly started to arrive.  Since things were intensifying, S wanted to try a shower for relief.  After a couple contractions, she got out and labored on her left side in the bed.  S asked to be checked at 330pm, and she was now 6cm, 80%, -1.

S is a unique laborer.  She says and does the funniest things.  We know we are getting closer and closer to delivery the crazier (and more naked!) things get.

S walked around the house a little bit.  She was starting to feel weepy, and exclaimed to us, “I am going to die.” This was in regards to the contractions.

S sat on the couch, nausea building.  We gave her rescue remedy to help with the anxiety she felt about the pain, then tried another herbal remedy to further help.

The f-bombs started flying, another indicator that we were getting closer to having a baby.

S moved to the bathroom and labored on the toilet, then squatting at her bathroom counter.  Moving around tends to be her “thing” that helps her stay comfortable.

My birth assistant worked on getting the temperature in the birth pool at a good temperature so that S could try the pool.

While waiting for the pool, contractions intensified.  S was timing contractions on her phone as a distraction.  We were taking turns providing counter pressure and words of encouragement.

Nausea overpowered S, as it often seems to do in her labors.  She paced back and forth through the bathroom, upset about the intensity of the contractions and the unfairness of vomiting in labor. I began applying cold rags to S’s face and neck for comfort.

The pool was finally the perfect temperature, and at 533pm S got into the birth pool.  She sat in the warm water, and asked to have the hose going with some cold water to help cool her down.  We continued applying cold compresses.  She was working so hard!

In hind sight, we now know we were in the last hour.  However, S tends to get very panicky, perhaps a little irrational (love her!) in the last hour.  She started demanding that D needed to call 911.  D cracked us all up when in all seriousness he told S, “I forgot the phone number.”

My birth assistant and I continued to refocus and encourage her through her labor waves.

S was moving her position very frequently in the pool.  She demanded I needed to do an exam at 545pm, and I found her to be 8cm, 90%, and baby at a 0 station.

S thought her water broke and was feeling a lot more pressure, and demanded I needed to check her again at 605pm.  There was no change.

S is quite a mover, and minutes later, she was very much done with the pool and needed to move.  She got out of the pool.  Prior to labor, there were a few things that S and I reviewed as things she desired in labor no matter what she said.

The first we are about to encounter is she really didn’t want everyone to see her full on naked if at all necessary.  I kept a couple towels on S as we moved all over the house.  S looked at me and said, “I really need to break stuff” followed by, “F*** my f***ing life!”

My apprentice gave S a couple things to help with coping.  S was very insistent that she wanted to go outside for some fresh air.  In her first birth, she had done some crazy things outside, so I was hesitant to let her outside.

She begged us to let her go on the porch, so I helped her put on a shirt and some panties, and her birth photographer and myself walked on to the porch with her.

After the birth, S told me that she was planning a way to jump the fence on the patio.  I laughed and told her I knew that already.  That is why I followed her outside!

Full on struggling to cope was upon us at 624pm.  S demanded that she wanted to “run outside naked” as she paced the house.  She looked at me and yelled, “I can’t do this.  Holy f***, Shannon!!!”

A couple minutes later, S fell onto her back on the living room floor, and demanded that I “do a cervical check right now and break her f***ing water.”

She was 8-9cm, 100% effaced, baby at a +1 station.  It took some work, but I was able to rupture her bag with my fingers.  Baby sounded great with his cushion taken away from him.

S rushed up off the floor and walked back to the birth pool, laboring on her knees.  Things got intense and crazy in these last moments before a baby came.  When S mentioned she wanted to try the birth pool again, I smiled and said I would be bringing my swimming shorts.  S began to dunk herself under the water.

I got stern with her and told her I know it hurts, but we aren’t going to do that.  She took her cup of ice and dumped it on her head, and violently began splashing the water around, soaking her bedroom wall and her photographer (thankfully not the camera!).

I wanted to wait until she felt pressure or we saw a baby.

Four minutes later, S stands up and quickly tries to rush out of the birth pool.  We remind her she is wet and needs to move slowly and allow us to dry her off.  She storms into the kitchen.  There is a glass of water on the counter, and I quickly try to pass it to someone else so it does not get shattered.

S grabs it, takes a drink, then pours the water on her head.  We were all surprised.  Then, S screams, “He is coming!”  I move down the chux, and there is a head crowning!

Such a beautiful delivery it was.  With no effort, just allowing her body to do the work, the head was easily and swiftly born.  The birth team was scrambling to get a shower curtain and chux underneath her to collect the mess.

S was feeling panicky.  I encouraged her to let her baby be birthed.  She shifted her legs open, and out he came, spontaneously on his own accord.  He was here!

Since we were in the kitchen/living room area, this was slightly complicated.  Another thing I was told not to let her do was to let her get her new couch bloody.  In the moment, she begged me to let her sit on the couch, but later she thanked me.

Within 90 seconds, we had her semi reclined in her bed.

I continued to encourage S, helping her to calm and slow her breathing.

She wanted the placenta out of her, so we got it delivered quickly.  She was hot, so I cooled her down with cold compresses.  Her little guy was soon ready to nurse, and we were all so happy to see him latch on like a little champ!

Welcome to the world Blaine, born earthside on March 5th, 2017 at 645pm, weighing in at 8lbs 6ozs, 20.75″ long.  I love this sweet mama so much.  I love that I have been part of all three of her littles journeys into this world,

and have gotten to watch her pull from the strength that she doubts she has and proves that even though its intense, she is strong and she can do it.  So blessed to have been her midwife for three births.