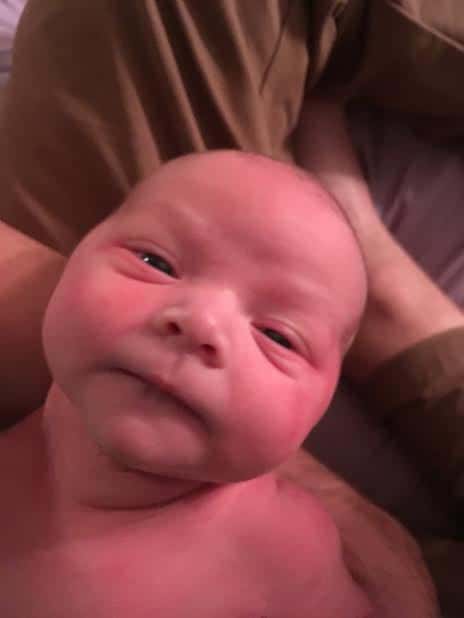 M and M started care with me at the end of the first trimester of their third pregnancy.  M had her second baby with me in August 2014.  You can read that story here.

Pregnancy progressed along with no issues.  M had experienced a postpartum hemorrhage with her previous home birth, so we made a plan along the way to be ahead of the hemorrhage this time around.

Five days past her expected due date, just like her last home birth, M sent me a text at 8am letting me know she had been having regular, strong contractions about 10 minutes apart, over a minute long all night.  M had moved a bit of a distance from me, and we wanted to make sure I got there with plenty of time.

Contractions became a little closer when M began moving around.  M was feeling anxious about the strong cigarette smoke smell in their apartment.  After chatting about things, we decided I should come her way with a diffuser and oils to help kill the odor and bacteria, and to help M be able to let go and melt into her labor journey.

While en route, I encouraged M to let M put in her heplock so we could have IV access after delivery for fluids.  M is a nurse anesthetist, and our plan was to get the heplock in M before she was in strong active labor and while her veins were nice and juicy.

I arrived at 12:45pm, and found M sitting in her bed, eating on some root vegetables.  Contractions were coming every 6-7 minutes, lasting 80 seconds and seemed moderate in intensity.  Big sister P kept handing her mama water bottles between contractions, encouraging her to drink.  We joked that P remembered from last time when she was born that her mama didn’t drink enough before I got there.

I got M’s vitals and listened to the baby.  She walked around the house, and I suggested she let me do the abdominal lift and tuck with the rebozo for ten contractions to strengthen things.  M agreed, and at 1:40pm I began the series of lift and tucks.

I finished the set of ten at 2:11pm.  Contractions were now 3.5 minutes long, lasting 60-75 seconds and were definitely much stronger in intensity.

M wanted to have some time alone with M, so I helped her get positioned in her bed on her left side, stepping in ever so often to listen to the baby and check how things were going.  At 3pm, nausea was setting in and I set up M with some peppermint oil to help with nausea.

At 3:20pm, M was up and moving around the house.  She was shaking now, showing us that transition was upon us.  M was moaning gently through contractions, leaning on the couch and M for support.

As 4pm neared, M began to listen to her body, grunting at the peaks of contractions.  We encouraged M on what a beautiful job she was doing, listening to her body and doing just what she needed to do.

M’s water broke spontaneously at 4:12pm, and she began to spontaneously push a minute later.  We could see the head on the perineum with the first push.  The head was birthed at 4:22pm, and sweet girl got a little stuck.  I went after the shoulder, and Blythe spontaneously was born at 4:24pm.  She was a little shocked, but after a few puffs from the bag and mask, she was soon breathing and crying for all to hear.

M did great postpartum.  With IV fluid and medication, she handled her blood loss well this delivery.

It was so wonderful getting to serve this sweet family for a second birth.  <3