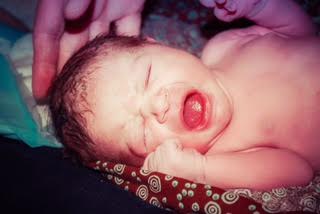 S and C started care with me in the first trimester of their second pregnancy.  S had her previous baby at home with me as well.  You can read that story here.

S’s pregnancy progressed along normally.  S had her first baby after 41 weeks, so we were all surprised on the morning of her due date when S said she thought today was going to be the day.  Contractions were coming consistently despite her activities.

I was finishing postpartum care at another birth, and recommended S to be sure she stays hydrated and to try a bath or shower and see what happens.

I came home and took a nap.  I sent S a text around 430pm to check in.  She was feeling a little crampy and tightness in the lower part of her abdomen.  She was currently resting in bed, but was planning to get up and finish cooking dinner.

S sent a text a little after 6pm that things were feeling stronger, but almost like she was constipated.  She was more worried that her body was reacting to constipation and that it wasn’t labor.  I asked S to call me with the next wave of cramping so we could see how things sounded.  S sounded calm and collected, and I could just barely hear the voice change with contractions.  We discussed S going to milk the goats and feed the animals and see what it does to the cramping.  I made the joke that I wanted S to be very aware of what is going on, because I didn’t want things to switch and she suddenly say, “Oh crap, this isn’t crap!”  We hung up around 620pm.

S sent a text at 637pm saying there was no way she could feed the animals.  Things were suddenly intense.

I got out the door in minutes and raced over to S, who lived about 15-20 minutes away.

I arrived at 703pm, grabbing just what I needed for delivery as I was confident baby was close.  I ran into the house and found S laboring in her bath tub.  Bloody show was noted in the tub.  S was feeling very panicky from the intensity of labor.  I sat beside her for a moment to help her refocus, before stepping away to grab gloves.

Two minutes after my arrival, S began to spontaneously push.  Baby was at a +3 station, the bulgy bag of water bulging out with pushing.

I continued to gently encourage S to take cleansing breaths, and focus the energy down.  Soon the head was on the perineum.  As the head was birthed, S’s bag of water broke at the same time.  Seconds later, baby was here!

My birth assistant walked in right after the birth, and quickly helped get things set up to get mom and baby settled in the bed.

Welcome to the world Caralynn, born earthside on May 1, 2017 at 715pm, weighing in at 7.0 pounds, 20.5 inches long.  It was a wonderful, blessing to be part of this little ones very fast and furious journey earthside.  I love having the privilege of working with clients multiple times.