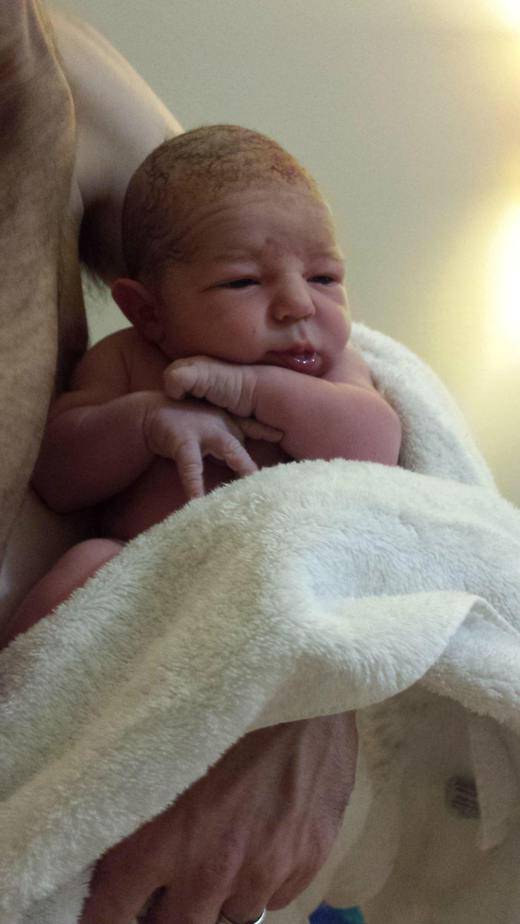 J and M started care with me at the end of the first trimester of their second pregnancy.  J had her first baby naturally in the hospital with a 12 hour labor, and was looking forward to a home birth for this baby.

J’s first baby was born a few days past her due date, so she hoped that her second would come a little before his due date.

J’s due date came and went.  Then 41 weeks came.  J’s sister was now in town, and they decided to go to Galveston at 41 weeks to see if relaxing helped baby get the right idea to want to be born.

The next day, J had her weekly appointment scheduled with me.  She arrived and said she had been having contractions off and on the last few days, but were 12-15 minutes apart all night.  She was ready to have a membrane sweep and see if that got active labor in gear.

I found J to be 2cm dilated, 50% effaced, and baby at a -3 station, her cervix was soft and anterior.  I swept her membranes, and recommended curb walking during a walk once they arrived home.  I estimated baby to be over 8 pounds.

Contractions picked up after J arrived home.  By 4pm, contractions were coming 5-10 minutes apart, lasting 60-90 seconds in length.  J had M help her do the lift and tuck with the rebozo for a few contractions while waiting for their doula to arrive.

Not long after their doula arrived, contractions spaced.  Her back was hurting from the contractions, but they were now coming 20 minutes apart.  Her doula got her in the bed on her side with a heating pad, and left her to rest.

I talked with J at 8:15pm.  She was laying in the bed and planning to eat a bowl of soup.  She was having an array of emotions of how things were playing out.  We chatted over some options, and J said she thought she might try a bath after she ate soup.

The bath and soup never happened.  9pm came and things hit with a fury.  J said she asked her doula to come back at 920pm as her contractions were coming on top of each other and making her shake.

J’s biggest wish was that she wanted to labor quietly with M and her doula like she did last time.  I let both J and her doula know I was ready to come whenever they wanted me.

J’s doula arrived around 950pm, and after watching 3 contractions and asking J, requested me to come.  Contractions were coming 3 minutes apart, 50 seconds long and J was feeling some pressure.

I was in the car with an estimated arrival time of 1035pm.

I arrived at 1032pm, and began to unload supplies.  J’s doula met me at the door, letting me know J’s water just broke.

I found J laboring in the shower, grunting at the peaks of the contractions.I squatted on the floor next to the shower, and could see the head starting to peak onto the perineum.  I asked for some gloves, and put them on in preparation for delivery.

J did beautifully at bringing her baby down slowly.  I asked M if he would like to help catch the baby, and he said he would.  He got into a position to help with the catch.

At 10:44pm, the baby was crowning.  I encouraged J to touch the baby’s head to help her with pushing.  She was emotional to realize her baby was right there!  That was all it took!  The head was birthed in the next contraction, followed by the rest of the baby seconds later into M’s waiting hands.

M and I together brought the baby to J’s chest as she took her sweet reward into her arms.  I turned off the shower, and started to dry the baby off.  He was here!  So fast and furious!

Welcome to the world Carl, born earthside on August 1st, 2017 at 1045pm,weighing in at 8lbs 8ozs!  He took his mama on a fast and furious labor journey of 90 minutes, and she was powerful!  It was an honor to be part of this couple’s birthing time.