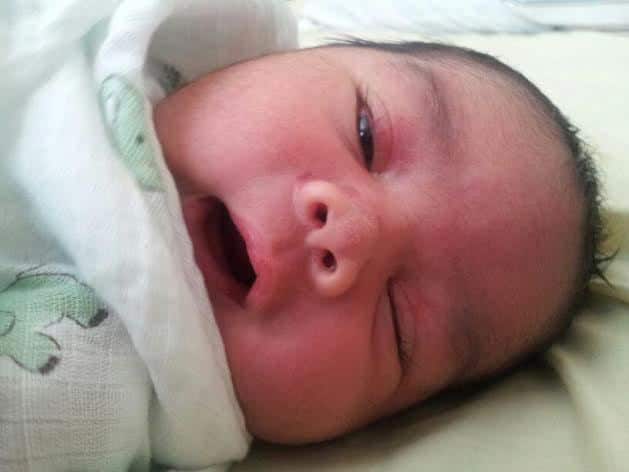 E and D began care with me at 9 weeks along in their first pregnancy. E’s pregnancy progressed uneventfully.  They were excited to find that they were expecting a boy.  E and D took hypnobirthing class and hired an awesome doula to help prepare for their birth. A little after 10 in the morning on May 25th, E text me saying she thought her water had broke.  She had been having some surges through the night and morning, as well as some bloody discharge in the night.  I told her to eat and drink and shower and that I would be over shortly to assess. At 11:30, I arrived to do a cervical check on E.  She was 4cm dilated, 70% effaced and baby was at a -1 station.  Fluid was leaking, with the forebag intact.  E was GBS positive, since rupture was confirmed, our 24 hour time clock began. E and D needed to go to the grocery store and I still needed to go home for my supplies.  We agreed that I would return in a couple hours and we would work on contractions. E’s doula and I arrived shortly after two in the afternoon.  We unloaded supplies, and I began to do E’s initial vitals.  I found her blood pressure to be elevated, 150/98.  E mixed some CALM powder in her water to see if it would help resolve her elevated blood pressure. E sat down to eat lunch, as her doula began doing acupressure using the awesome oil blend Labor Ezz by Gritman Essential Oils.  Surges were irregular, coming about every 7-10 minutes.  After E had finished her lunch, we began alternating B&B and labor enhancer tinctures to increase surges. E rocked on the birth ball and walked around the living room.  As four in the afternoon neared, we decided to perform vitals and do a cervical check and see what change has happened.  Blood pressure was still elevated at 154/106.  Cervix was now 5cm/70%/-1.  The forebag ruptured during the check, the fluid stained with moderate meconium. It was a stinky position to be in.  Rest would help lower the blood pressure at this moment, but would not help bring on active labor.  E went to walk with her doula, while I began sending texts to consult and see if we would be able to bring E into the hospital with my preferred provider. We continued to monitor E’s blood pressure every thirty minutes as well as listened to the baby.  E’s doula pulled out essential oils to help lower the blood pressure.  One reading a little after 5pm was 148/100, making us feel hopeful that it was going down and we could continue to work on things. Our hopefulness was short lived.  An hour later, her blood pressure was 158/116, making transport necessary.  My preferred provider was on call and able to accept E to augment her labor, so we packed and loaded and drove to the hospital. Between 9-10 in the evening, E finished getting assessed, and pitocin started.  Her blood pressure had come down into the 130s over 80s while resting in the bed, cervical check was 5cm/50%/-2 and antibiotics started for her GBS status. E labored beautifully and calmly all night long.  So calmly we as the birth team just sat and watched.  She pulled within herself the strength to breathe and cope through her contractions.  She would alternate laying in the bed and listening to her rainbow relaxation cd with getting up and rocking her hips beside the bed. As the morning drew near, things were definitely picking up.  As 7-8am drew near, E needed to stay resting in the bed.  Her blood pressure was elevating again when she was on her feet.  A check found her to be 7cm/70%/-2. For the next hour and a half, we alternated E’s position in a “around the clock” fashion.  First, left side lying with her foot in the stirrup, then the same on the right.  Then we moved on to hands and knees position.  E was so calm, so stoic while she labored.  A couple points she mentioned she was feeling a little pushy.  A little after 10 in the morning, E stated the urge was getting unbearable so we called for a check. Our amazing, awesome provider in the hospital did a cervical check and found E to be 9cm/80%/-2, however with a contraction her cervix was completely dilated and effaced and dropped to a 0 station.  With the next contraction E was asked to pushed, the cervix staying completely away and baby staying engaged at a 0 station. E pushed on her right side.  After a couple pushes, we could see the baby’s head starting to come at the perineum.  E was just as calm with pushing as she was with laboring. Thirty minutes later, the head was crowning.  E let out the loudest noise from the whole labor process, a small yelp from the burning.  The head was birthed within seconds, followed by the baby. Baby Cesar was immediately brought to E’s chest.  The placenta was birthed ten minutes later, and the cord cut six minutes after the placenta was birthed.  Baby Cesar latched to the breast like a champ and has no issues since! So honored to have been part of E and D’s pregnancy and birth.  Welcome to the world baby Cesar, born on May 26, 2014 at 10:51 am weighing in at 8.11#.  E is seriously one of the strongest women I have ever been blessed to serve, laboring so peacefully, pulling strength from within to get through each surge, with the use of pitocin.  Absolutely amazing!