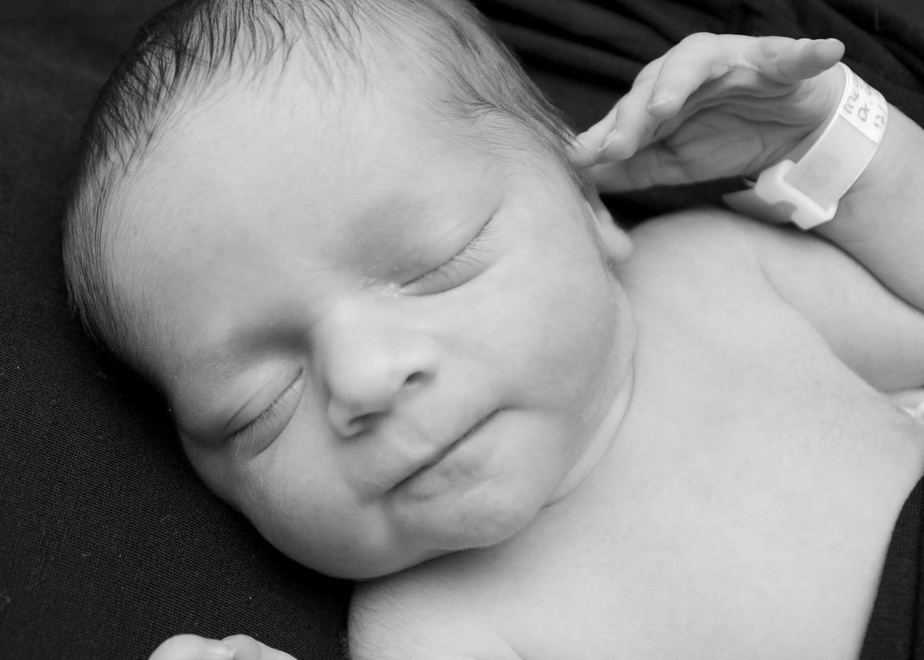 N and T hired me to be their doula around 35 weeks into their second pregnancy.  I was their doula five years ago, and was happy to get to work with them again.

At 35 weeks, N’s baby was unfortunately in a frank breech position.  Her current OB was unwilling to help with turning the baby.  N began to see a chiropractor I recommended to see if it would help.  I also gave her some homeopathy to try.  Nothing was working.

Around 37 weeks, N began seeing an acupuncturist I recommended to see if baby would turn.  N received a lot of good benefits from acupuncture, but this sweet little one would not turn.

At 38.3 weeks, N decided that she wanted to contact an OB referral I had that delivers vaginal breech babies.  The ball began rolling quickly.  The OB was willing to see her for a consultation, and was arranged for the following Monday, when N was 39.0 weeks.

The consultation went well.  However, after getting some measurements by ultrasound, he felt the baby’s head was too big to safely attempt a breech delivery.  He offered to schedule her for an ECV (external cephalic version) in two days, with the plans to do an induction if baby turned to keep baby in that position, or a cesarean if baby did not turn.

We all arrived to the hospital bright and early the morning of December 14th.  Nerves were high, waiting for the procedure to happen and to see what would come about.  The epidural was placed, a requirement for the ECV in the hospital to help relax everything, around 815am.  N had an unmedicated birth with her first, so this was a new experience.

Praying fervently, I was overjoyed to find within seconds of getting into the OR that this little guy had easily moved transverse.  In less than 5 minutes, the baby turned head down.  There was a lot of tears of joy, as N really was hoping to avoid a surgical birth.

N was moved back to her labor room.  Her OB decided to start her labor induction by breaking her water first, to see if it would get things rolling.  She was 3-4 cm dilated, 80% effaced and baby was head down, but high at a -4 station.

The epidural had been turned off, but it took several hours for it to leave her system.  While N was very numb, we alternated positions in the bed, going from left and right side lying to be in restful positions, as well as sitting up straight in what I call the “Queen’s chair” to help move the baby down into her pelvis.  Contractions started to come, alternating between 3-5 minutes apart, but were mild.

The afternoon proved to be much of the same.  N began to have a lot more feeling, so she was able to get up and labor on the birth ball and move around.  She got a good nap in the later parts of the afternoon, before pitocin was started at 505pm.

N moved around some.  The pitocin was increased at 539pm, and N decided to try the Queens seat again.

She moved to right side lying, and at 635pm, her OB came in for an exam.  She was now 5cm, 80% effaced and baby at a -2.  He felt her cervix felt more like she moved into active labor and gave a guesstimated time of delivery at 2-3am.

The pitocin was increased again in the early 7 o’clock hour.  N changed to sitting position.  Her contractions were coming every 3 minutes, lasting 60 seconds long and felt moderate in intensity.

Nurses switched at 7pm.  N had a great nurse in the morning, but had an equally great night nurse who had recently begun birth assisting at an area birth center and loved unmedicated birth.  Although N still had the epidural catheter in her back, it had been turned off almost ten hours and was no longer providing any pain relief.

Her nurse was very conservative with the pitocin, and did not do an increase for almost three hours.  N labored on the birth ball during 9pm hour, and she and I began to discuss the potential need to increase the pitocin once more.  Although contractions were regular and present, we both knew they weren’t strong enough.  N asked to be checked at 10pm before getting the pitocin increased.  She was pretty much the same as she had been a few hours earlier.  The pitocin was increased at 1004pm.

Things became very active from there.  Contractions were regular and hard at this point.  N labored on the birth ball for over an hour, focusing and breathing through the labor waves.  N alternated from sitting to standing and moving around, listening to her body over the hours, trying to find what positions worked for her body with her labor journey.

Her nurse was very on board with trying anything, so I recommended letting me do the abdominal lift and tuck with the rebozo to get the baby to rotate and more into the pelvis.  N was very uncomfortable at this point, but she was a trooper and let me do it.  One contraction I would do the lift and tuck, the next would take a break so that the baby would be on the monitor for one contraction.  We did this for ten contractions.  N appreciated the breather in between because the lift and tuck dramatically intensified contractions.

After the lift and tuck, N continued to sit on the edge of the bed, moaning gently through contractions, while I sat behind providing counterpressure during contractions.

N began feeling pressure as 2am came on.  Her nurse did an exam at 222am and found her to be 8cm dilated, 90% effaced and baby at a 0 station.  The nurse and I both had a sneaky suspicion that although not complete and ready to push, it would not be long.  N became nauseous and vomited, prompting the nurse to call the doctor immediately so her could leave his house and get to the hospital.

Just as we predicted, N began to feel lots of pressure.  She was standing and walking around.  She was found to be completely dilated, and bearing down with contractions.  There was a flurry of activity going on around the room as everyone scurried to get things ready for delivery.  I was thrown a glove by the nurse at one point to assess how close the baby was, and found him to be at a +3 station.

It wasn’t too long, and her OB arrived.  N pushed standing for a bit, then decided to try the bed.  He requested she get in a reclined position to help the baby get under the pubic bone since he seemed to be acycnlitic.

I did tug of war with N using the rebozo to help the baby get to the perineum.  The baby hung out right near the perineum for a couple contractions, and the OB opted to do an episiotomy to help N get the baby delivered quicker.  It was another push and the baby was crowning, followed by the rest of the baby on the next push.

Welcome to the world Champ, born earthside on December 15, 2017 at 348am, weighing in at 8lbs 5ozs.  I admire this amazing woman so.  She did her pitocin induced labor completely unmedicated, despite having the epidural catheter right there in her back, which could have  been turned back on in an instant if she had asked.  She stayed the course and completely rocked her labor.  I am so blessed that I got to be their doula through both their birthing journeys.