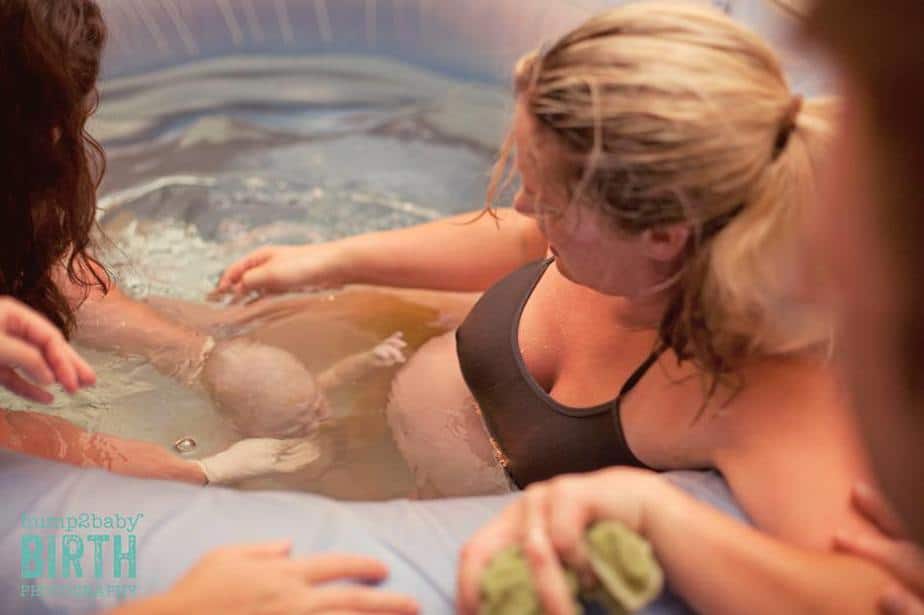 Between both worlds.  Photo taken by the lovely Abby Camarata of Bump 2 Baby Birth Photography. S transferred care to me at 23 weeks along in  her pregnancy.  This was her second baby.  Her first she had at a birth center.  They had moved to the Cypress area and decided home birth was a good option for them.   Right at 37 weeks, S text saying she was having a lot of cramping, contractions and back pain.  She came over and we did a check and found her to be 2cm dilated, 70% effaced and baby engaged at a 0 station.  I encouraged her to go about her day and to keep me updated on how she felt.  Neither one of us knew that this lovely prodromal labor would continue on for another month! Two weeks later, it seemed like maybe S was entering active labor.  Contractions changed during the day, and in the evening got to be 2-4 minutes apart.  A cervical exam found her to be 4cm dilated, 90% effaced and baby at a 0 station.  She labored hard like this for a couple hours and then contractions just fizzled.  S took a nap and woke and they were every 30 minutes.  S’s doula and I returned home, encouraging S to rest as much as possible and keep us updated. Two more long weeks passed.  S tried acupuncture, massage, relaxing but nothing would bring this little guy earthside.  S did a wonderful job at staying patient and encouraged. August 14th arrived putting S at 41 weeks along in her pregnancy.  She arrived at Sonomasters for her 41 weeks scan and she text me that her contractions were every 5-6 minutes and feeling different.  I told S she could always reschedule her ultrasound.  She decided to go in and keep her appointment at 6:00pm. By 8pm, contractions had been coming every 3-4 for an hour and S asked me to come.  When I arrived, this was definitely different than last time.  S had to stop and lean on her counter during contractions and breathe.  She was not vocal.  Cervical exam found her to be 4-5cm/90%/+1 station.  I told S it definitely seemed like labor and she laughed.  She wasn’t convinced.  Even more than that, her husband D fully did not believe me when I said S was in labor and though I was joking when I said go ahead and fill the birthing pool. I talked to S about going for a walk since she didn’t believe it was labor, but the surges were coming on so often and strong that she couldn’t get near the door.  She sat on her birth ball for a few minutes.  At 8:30pm, she asked me to tell her doula, birth photographer and the birth assistant to come. By 9pm, the whole birth team was together.  The pool was filled and S gladly got into it as her surges were coming every 3 minutes, lasting over a minute and very intense.  S intuitively listened to her body and moved and rocked as she felt necessary.  Her doula C applied counter pressure during contractions that helped with the back pain.  We all sat back and watched for S to tell us it was time. As the ten o’clock hour came, surges were every 2 minutes with only 30 second breaks between.  Soon, S stated she was feeling pushy.  I encouraged her to let that pushy urge build and let me know when she could not hold back the urge to push any longer. 10:19 S began to push some with contractions.  She pushed a few contractions, and then we decided to check that we weren’t pushing on a cervical lip.  No worries here.  I found her to be 10cm, completely effaced and at a +3 station.  Baby was coming. Minutes later, S’s membranes released and ruptured in the pool, followed by the crowning of baby’s head.  S was leaning over the pool and pushed with all her might.  A minute later, her baby was born. S flipped over to help bring her baby up from the water.  Sweet baby Coltin was here at 10:38pm! Mama did amazing in her fast and furious labor.  Baby Coltin was two pounds bigger than his big sister, to the astonishment of his proud papa and mama! Welcome to world Coltin Lane!  Born on August 14, 2013 at 10:38pm, weighing in at 9.4#, 20.75″ long!