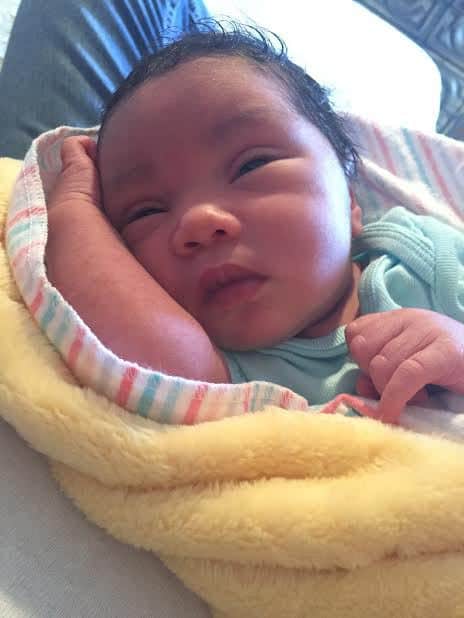 R and M started care with me in the first trimester of their second pregnancy.  They had their first baby fairly quickly and easily at home in India, and were looking forward to another home birth with this baby.

The evening of October 24, R sent me a message letting me know her water had broke.  After talking, we discussed sleeping and if contractions had not started by morning, R would come by to see me.

R slept some through the night.  She had some inconsistent contractions, but nothing strong or regular.  R and M arrived at my office at 9am.  All vitals were normal.  Baby was in a LOT position.  I confirmed water was definitely broken and did an exam to try to help move things along.  R’s cervix was 2cm dilated, 50% effaced and baby at a -2 station.  I felt a hand by the head and tried playing with the baby’s fingers to get her to move her hand, but she didn’t seem too interested in that.  I made R a tea blend with some herbs to help get some contractions going.  I sent R and M with the birth pool and encouraged they try walking before going home and setting up the birthing area.

Contractions started getting stronger almost right away.  M and R went to the store and soon headed home to set up the pool and their space.  At 11am, R told me the contractions were definitely uncomfortable and were coming every 4-5 minutes, lasting 30-40 seconds.  At 1215pm, M sent a text asking me to come.  My apprentice R and I finished with the client who was in the office and headed their way.

R and I arrived at 115pm and found R laboring in the birth pool, very focused on the labor waves.  R was alternating between semi sitting and kneeling based on what her body was telling her to do. After I did vitals, R asked for an exam.  She felt to be 5-6cm, 100% effaced and baby at a +1 station.

R and I began to quickly get everything set up for delivery.  Contractions were every 3 minutes, lasting 70 seconds, and the waves were intense.

Nausea came strongly over R, and before we could get to her with a bowl, vomiting started from the intensity of labor.  We immediately began to drain the pool, and I started talking to R about needing to get out of the pool.

As 2pm neared, R got out of the pool and rested on her left side on the floor, on the way to the bathroom.  Things were intense, and R asked for something to help with the pain.  I gave her a couple doses of some herbs that helps calm.  After a couple contractions, R said she was ready for me to walk her to the bathroom to shower off.  The time was 211pm.

We made it to the bathroom and a labor wave came upon R and she spontaneously sat down on the toilet.  She exclaimed that the baby was right there, and I could see the head peaking on the perineum.  My apprentice R handed me some gloves, while we moved R back to her room per her request.

R got on her knees in her bedroom and began to spontaneously push at 215pm.  The head was crowning immediately, while I encouraged R to open her legs more to allow the baby some space.  That did the trick, and out came sweet baby girl at 216pm, a hand by her head.