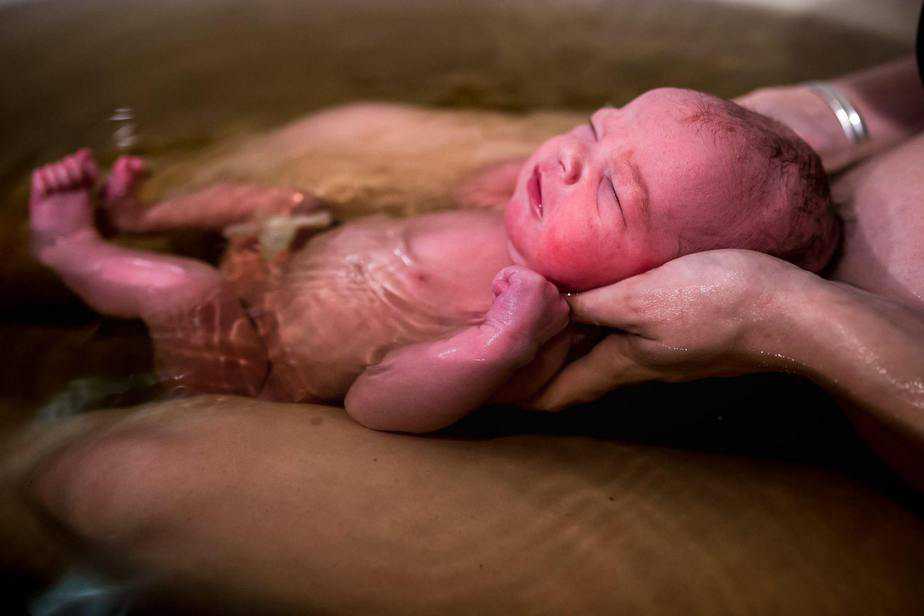 C and J started care with me in the first trimester of their third pregnancy.  C had previously had two unmedicated births in the hospital with midwives, and was looking forward to a home birth for this little one.

C’s pregnancy progressed along normally.  On her due date, I received test results that indicated I was at high risk for preterm delivery, and that we needed to take my contractions more seriously.  I gave C the option of coming in for a membrane sweep and herbs if she wanted me there for sure or if she was okay with things happening how they happened.  C said she would come over that afternoon.

C arrived for labor encouragement.  She had seen the acupuncturist that morning, and was feeling some irregular contractions.  I did C’s exam, and found her cervix to be 2cm dilated, 50% effaced, and baby at a -1 station.  I told C to go for a walk after leaving my place, and let me know how contractions were.

Contractions increased fairly soon after C left.  Her doula arrived at 735pm, and did lift and tuck.  By contraction 8 of lift and tuck, contractions were much more intense, and C was feeling some pressure, so I was instructed to come.  C is big on wanting her water broke at a certain point in labor, and she was ready for her water to be broken.

I arrived at 9pm, and found C laying on her left side during contractions.  C got up and moved around while I did her vitals.

I did an exam at 930pm, and found C to be 6cm dilated, 100% effaced, and baby at a 0 station.  C said she wanted her water broke, and I was able to snag her bag with my finger during a contraction.

C’s doula prepped her labor tea to drink that her acupuncturist prescribed.  C had drank this tea in her previous labors, and felt it helped speed up the process.  C likes efficiency in labor!

Right before 10pm, the birth pool was ready, and C was ready to try laboring in it.  She alternated laboring in semi reclining and kneeling in the pool. During contractions, C was all work, but in between she was chatting and laughing and having a good time.

C soon began to feel some pressure, and began giving some small pushes when her body gave the urge.  C opted for an exam at 1021pm, and she was 8cm dilated, and baby at a +1 station.  We talked about resisting the urge for a little bit longer.

C felt the pool was slowing things down, and opted to get out.  She moved to the bed into hands and knees, and within a couple contractions, began to push at 1034pm.

C pushed well on her hands and knees.  We soon could see a little bit of baby’s head peeking out at us.  C was getting tired pushing in hands and knees, but decided to stay there versus moving at first because it was feeling effective.

Soon we could see more head, but C could feel him move back up slightly after contractions.  At 1055pm, frustrated he would not stay put, C exclaimed, “The little f***er went back in!!!” We all got a good laugh, as C rolled onto her left side, determined more than ever to get baby out!

A minute later, C birthed his head.  Baby came out with a hand beside his head and the cord around his neck, which I took care of as he came out slowly.  At 1057pm, C gave one final push and brought her sweet boy earthside into J’s waiting hands.  He was here!

Welcome to the world Emmett, born earthside on April 23rd, 2018 at 1057pm, weighing in at 8lbs 0ozs, 20.75 inches long.  His mama worked hard and efficiently to bring him earth side at home, just as she hoped and prepared for.  It was such a joy to help this mama through her birthing journey.