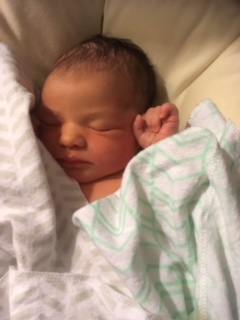 L and E started care with me in the first trimester of their first pregnancy.  L had researched for awhile what she would want for her prenatal care and delivery, and knew she wanted a midwife and home birth when she found out she was expecting.

L’s pregnancy went along perfectly.  She did everything she could to prepare for her birth, and took excellent care of herself for the journey with a great diet and exercise.  She was even mowing the lawn just a few days before having the baby because she felt that well!

Five days passed her estimated due date, L was in the office for her regular appointment, saying contractions were much more frequent these days.  She decided she wanted to an exam to see if any cervical change had begun.  I found L to be 2cm dilated, 80% effaced, and baby at a 0 station.  L asked if I could sweep her membranes to see if that would turn her contractions into labor contractions.

L had some powerful contractions the rest of the day, as well as the following day, but baby did not come.

L came to the office on June 19th, 9 days passed her estimated due date, for labor encouragement.  L stated her contractions over night had become more regular and stronger, and had continued after taking a warm shower. Her cervical check was the same as Friday, with more bloody show with the sweep.  L consumed the herbs to try to help strengthen her contractions.  I recommended she see her chiropractor, go for a walk, and eat lunch after she left my place.

Contractions immediately picked up in frequency and intensity.  L continued on with her day, alternating rest with activity to help make the contractions more active.  As the night came on, we talked about a shower and sleep, but as you would expect, active labor began around 10pm.

L labored through the night with E and her mom, and requested birth team around 730am.  Apprentice R headed over first while I worked on getting things together, as taking a newborn added a lot of time to get out of the house for me since my little one was 3 weeks old.

When R arrived, contractions were coming every 3 minutes, lasting 60 seconds in length.  R was moaning with contractions, and stating she was experiencing pain in her back.  She alternated positions well, going from walking around the house to kneeling to sitting.

L moved into the birth pool, laboring on her knees.  We began to administer a homeopathic to help control nausea and vomiting as L was beginning to struggle with that.  Contractions at this point were lasting 2.5 mins, 60-70 seconds in length.

L alternated kneeling and squatting in the birth pool, before moving out and sitting on her bed side at 11am.  She was beginning to feel some more pressure, and was moving towards the toilet to empty her bladder and give baby some room to keep coming down.

Twenty minutes later, L moved back into the birth pool.  She said the pressure was changing, and she was feeling it more in her rectum.  L did beautifully listening to her body’s signals to change positions, and every few waves L was changing her position.

L moved to laboring backwards on the toilet at 1230pm. After some bleeding and increased pressure, I did an exam on the toilet and found L to have an anterior lip of cervix left.  I encouraged L to continue to labor and allow that little bit of cervix to melt away.

L moved back to the birth pool, and stated at 110pm that she had her first contraction where she felt like her body wanted to push.  Through out the next hour, we encouraged L to wait for the urge to push to become unbearable.  Contractions were coming every 2.5-3 minutes, lasting 60+ seconds.

At 208pm, L stated that it was “hard not to push.”  I found she still had a lip, and baby was at a +2 station.  L agreed that she wanted to try to push with me holding back her lip of cervix, and started to pushing with my assistance at 213pm.

L pushed on her knees in the birth pool, and by 234pm, the lip was gone.  Then the fun began.  We alternated every position thinkable to push in the pool.  L pushed on her knees, in a lunge, in semi reclining, on the birth stool, and did tug of war with apprentice A.  Baby moved to +3, but enjoyed hanging out there.  L was getting tired, but did great with staying hydrated.  We gave her some homeopathy treatments to help with energy.

L moved to the bed at 319pm to help her rest between pushes.  She started pushing on her left side, then moved to semi reclining and resumed tug of war with A.  About every 15 minutes, L rotated her position in the bed.  As 4pm neared, she pushed in hands and knees, and then moved into kneeling and alternating lunges.  Through out this time, either R or myself were providing perineal massage to help stretch and give room as we could tell that L had a tight pelvic floor.

This position of kneeling in the bed finally was the magical position, and we could see the head staying on the perineum at 402pm.  At 405pm, the head was crowning.  L did a great job letting her perineum stretch to try to prevent tearing.  The head was birthed a minute later, with little one’s hand right by her head, following with the rest of the body at 407pm.

Welcome to the world, Fern!  Born earthside on June 20th, 2018 at 407 pm, weighing in at 8lbs 4ozs, 21″ long.  Her mama was powerful through her slow and steady labor journey, welcoming her baby peacefully and gently at home just as she wanted.

Baby Fern nursed like a champ, and was back at birth weight by day 5!

It was such a privilege to work with this family, and help them with the birth journey of their first born.