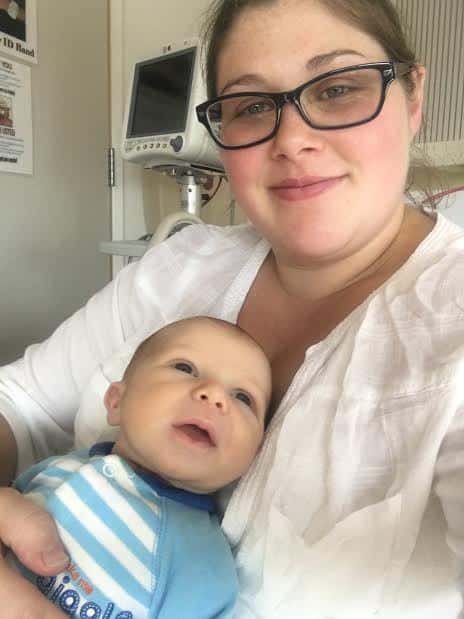 C and J started care with me near the end of their second trimester of their third pregnancy.  C was seeing an OB but had some less than stellar appointments that prompted her to look else where for a new care provider and a better experience.

I really admired how C followed every recommendation I offered.  This was to be her first unmedicated delivery, and I highly encouraged she consider hiring a doula and taking a childbirth class.  Within days she had hired a doula and signed up for Birth Boot Camp online program.

J is a truck driver and it kept him away from home for long stretches.  I admired how committed he was to C and this birth.  Although they couldn’t do most of the class sessions together, J did most of the lessons even though his work schedule made it difficult.  I thought that was awesome.

As C’s birthing time neared, she was becoming nervous about J missing the birth and wanting him to be here.  His job was keeping him out of state until she went into labor, and I felt that stress of the unknown was keeping C from letting go and letting her body go into labor.

At 41.0 weeks C and J decided that he would come home the next day and we would do some membrane sweeps and see if we could get C into labor.  I saw C that day and we did an exam.  Her cervix was 1cm dilated, 50% effaced and baby at a -4 station.

That evening, C sent me a text around 10pm with a contraction timer.  Contractions were coming about every 5 minutes, lasting a minute long.  I was just about to walk out of my house to check on another mama in labor.  I encouraged C to drink some water and try a bath and let me know how she felt after.

I heard from C around 1130pm just as I was getting to my other mama’s house.  She said she felt comfortable in the tub, but as soon as she got out of the tub the contractions were much more intense.  I told C she better go ahead and call J home.  I checked my other patient and determined things were still early.  I let C know I was on my way and should be at her home at 1am.

I arrived right at 1am and found C laboring in her room, her doula providing counterpressure.  Contractions were coming every 3 minutes, lasting 70 seconds in length.  I did an exam and found C to be 4cm dilated, 100% effaced and baby at a -2 station.  This was a huge change from the exam in the office 14 hours earlier!

I asked C how far away J was and she said he was 7 hours away and had to wait for someone to take his place.  My heart broke for her because based on my observation, there was no way he was going to make this birth.  I asked her how she felt about that, and she said she had more peace about it than she thought she would.  We have later joked that with the next baby, J needs to come home a day earlier than he tells C so that her body doesn’t relax too much too soon from knowing he will be coming home.

C walked around her room some during her contractions, waves of nausea coming over her.

A little after 2am, C’s contractions were coming every 2.5 minutes, lasting 85 seconds in length.  She labored on her hands and knees in her bed, leaning on her birth ball.  Her doula was at her side, providing counter pressure during the contractions.

The apprentices, assistant and myself moved quickly to get things set up and the birth pool filled, knowing C would be wanting the pool soon.

She labored so calmly on her knees, her doula at her side supporting her.  As 4am neared, C said she could feel the baby moving down and the pushing urge was getting strong.

We recommend C try alternating side lunges with the next few contractions.  Within a few waves, C was grunting during the contractions.  I recommend J be facetimed in at 420am, knowing birth was near.

C spoke with her baby during the waves, which were coming powerfully quick now.  She asked him to come, to please come out. J gently encouraged her from the phone as C worked bringing their sweet boy closer with each wave.

I asked C if I could do an exam at 435am to see if there was a lip.  I did an exam and found an anterior lip.  C agreed to me reducing the lip, and it easily reduced in one contraction.  Two minutes later, C’s water broke in the birth pool.  Things moved fast from here.  Baby was crowning at 440am, followed by the baby a minute later.  Baby boy was born with a nuchal hand, which was nestled quite comfortably.  I helped release the hand and he came quickly after.

Welcome to the world Indy, born earthside on August 31, 2016 at 441am, weighing in at 7lbs 14ozs, 20.5″ long.  His mama was beautifully strong as she brought him earthside just as she had been working and planning for.  <3