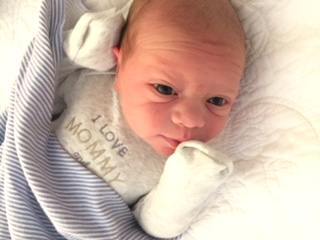 E and F started care with me in the first trimester of their second pregnancy.  They had their first baby at home with me, and were excited to do this journey again.  You can read about the wild ride their first little one took them on here.

E’s pregnancy progressed along perfectly.  Her first little one seemed to stop growing right at the end, but this little one was chunking up perfectly.

Two days passed her estimated due date, E was in for her regular prenatal appointment.  She decided to do an exam just to see where her cervix was at, since she had experienced several nights of prodromal labor.  She was 4cm dilated, 80% effaced, and baby was at a -1 station.  E decided she wanted to try a membrane sweep to see what might happen.

Through out the afternoon, E stated she was having regular contractions that were not very painful, with a lot of hip/back pain and some occasional rectal pressure.  Knowing how E’s first labor went, I was on high alert about the back/hip pain as being a potential sign of progress for her labor.  We decided I should head over that evening, with an estimated time of arrival at 630pm.

E was sitting on the birth ball, eating a snack, when I arrived.  I made her some herbal tea, and began to give her some homeopathy while we began to get E and baby’s vitals.

I did an exam a few minutes passed 7pm, and found E to be 7cm dilated, 100% effaced, and baby at a 0 station.  E asked me when I thought baby would be born, and I said by midnight was my guess.

E sat back to labor on her birth ball, before moving to hands and knees while the birth pool was prepared.  E was feeling a big shift in her contractions, which was bringing more pressure in her back.  F began to provide counter pressure during contractions for comfort.

E felt like she needed to move, and began to pace around the house.  I suggested trying lift and tuck with the rebozo for ten contractions, and E agreed.  My apprentice A began to do them to see if it would shift the labor pattern.  Contractions were coming every 2 minutes, lasting 40-50 seconds.

E decided to rest in her bed on her left side while the pool was finishing being filled.  At 912pm, E got into the birth pool in a semi reclined position.  She never had a chance to enjoy the pool in her previous birth, and was happy to get that relaxation this time.

E moved to laboring on her knees.  Pressure was building.  As 10pm came, E felt like she had to push, that she could not continue much longer.  I did an exam, and found E to be 8cm dilated with baby at a +1 station.  Her cervix was starting to swell a little bit, so I recommended shifting position around in the pool, and told E not to push.  My birth assistant H began to provide words of encouragement over E.

As 11pm neared contractions were coming every 2-2.5 minutes, lasting 55 seconds.  I started to discuss fears with E, and asking her if there was anything she was fearful or worried about.  We decided it would be good to get out of the pool, and try open knee chest in the bed.  A provided hip squeezes and counter pressure while H provided words of encouragement through the waves.

I like to do open knee chest for a minimum of 40 minutes, as it is usually magical in that time frame.  At 38 minutes in, E exclaimed that she had to push.  She adjusted her position to hands and knees, and began to spontaneously push with contractions.

At 1149pm, E moved to semi reclining as she wanted to push like she did with her previous baby.  I found her to be 10cm dilated, and baby at a +3 station.

E’s water broke at 1155pm.  I suggested trying tug of war with the rebozo since it had worked well in her previous birth, and E agreed.  A began to do tug of war with E at 1159pm.

Tug of war was magic!  At 1203am, baby began to crown, quickly followed by the head and body!  E placed her hands at the right time, and helped deliver her sweet boy into her waiting hands, and brought him to her chest with my assistance.

Welcome to the world Jonas!  Born earthside on January 31st, 2018 at 1203am, weighing in at 7lbs 8ozs, 19″ long.  He was much bigger than his big sister, which we all anticipated and were happy about!

It was such a joy to help support this client through another birth journey!  Repeat clients are always so special!  #sacredjourneymidwifery