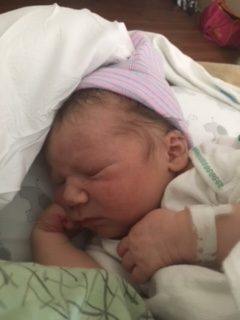 S and J started care with me in the first trimester of their third pregnancy.  S had her previous baby with me, and was looking forward to another beautiful VBAC experience.  You can read her previous birth story here.

S sent me a text the morning of October 29th letting me know that she had been having contractions since 6am, and now thought her water had broken.  After chatting for awhile, we decided I would head that way.

I arrived at 1220pm, and found S laboring in her room.  I did her vitals, followed by a cervical exam.  I found S to be 3-4cm dilated, 80% effaced, and baby at a -3 station.  S was feeling emotional after the exam, as she had a lot of things on her mind and was emotional about having to go through the labor process.  I talked with her for awhile, and then decided to do abdominal lift and tuck for ten contractions.

The lift and tuck strengthened the contractions.  Contractions were coming every 3 minutes, lasting 60 seconds in length.  After the lift and tuck, S got into semi reclining in the bed to spend some time with J.

S labored on the birth ball at 215pm after feeling like the contractions were not as effective after resting, followed by another set of lift and tuck.

I did an exam shortly after 3pm after hearing some decelerations.  I felt scar tissue on her cervix that S agreed for me to massage.  That helped immensely, and now S was 5cm dilated, 100% effaced, and baby at a -1 station.

S got on her left side in the bed to try to rest.  She soon asked for varying birth team members to help as her emotions were high again, and she needed the support.  Contractions were coming every 3 minutes, lasting 90 seconds.

As 5pm neared, we helped S get into open knee chest to help with progression.  Apprentice R helped with counterpressure through the contractions.

An exam was done at 530pm, and S was 6cm dilated, 100% effaced, and baby at a -1 station.  She was ready for the birth pool, and got in to labor on her knees at 540pm.  S, J and I talked through how S was feeling and what did she need to help her feel safe and to progress.

S got out of the birth pool near 630pm, and alternated laboring on the toilet and walking around the house, moaning with contractions as she was starting to feel some pressure.

Chiropractor N arrived at 7pm to give S an adjustment to see if that would help with progression and give baby more room to rotate.

S began to bear down at the peaks at 735pm as the pressure was building.  I did an exam at 8pm, and found S to be 8cm dilated, 100% effaced, and baby at a 0 station.  I suggested open knee chest again to help alleviate some of the pressure from the baby, and help to dilate.

S asked if I could try to reduce the lip as it was hard to hold back pushing.  She was now 9cm+ at 830pm.  S decided to move to the toilet where she blew through contractions.  After the toilet, she stood and did captain morgan’s with deep hip circles for three on each leg.  She was sounding more grunty, so we decided to do an exam in a few minutes,

S was 10cm dilated, and spontaneously pushing at 915pm.  S’s first birth was a surgical birth that happened at pushing, and caused a lot of emotions with her first VBAC, so a longer pushing phase was definitely expected by me.

S began alternating positions in the bed as she pushed.  First on her hands and knees, then in semi reclining, and then on her left side.  We began giving a homeopathic to help with giving more oxygen to baby.

At 10pm, S began pushing in a squat at her bedside, before moving to the birth stool to push.  Baby’s position was not perfect at the moment, and was trying to rotate while coming down at the same time.  Contractions 2.5-3 minutes apart, lasting 60-75 seconds in length.

I requested S take a break for a few contractions from pushing at 1045pm, and stay in hands and knees to help baby rotate.  S was weepy and emotional at this point.  At 1120pm, S looked at J and myself and said she mentally needed to transport.  Her life stress was more than she could cope with, and she could not let go and have this baby.  I talked with her about what a transport meant, and the potential likelihood of a repeat cesarean at her local hospitals.  S agreed, and requested to go to the nearest hospital.  I called ahead to the nearest hospital, and they refused to accept S if I brought her in.  I called the second nearest hospital and gave a report.

S decided to transport by private car, so I rode along with her and J since she was complete right before midnight.  Her last exam, S was 10cm dilated, 100% effaced, and baby was at a +1 station.  Funny thing, I am never without my phone, but somehow I forgot my phone at S’s house.  Thankfully my birth assistant H found it, and brought it with her.

We arrived at the hospital, and they had a room waiting for her.  She was told they would be taking her back for a cesarean once she was prepped for one, but when the doctor did an exam, the baby had come way down in the car ride and was now a +3.  The doctor told S she needed to push with contractions.

The doctor had some unique ways to “encourage” efficient pushing that I would not recommend utilizing, but I gently encouraged S to push with all her strength and get this sweet baby out vaginally.  The doctor used a vacuum when he was tired of waiting, and S had the baby crowning.  Within seconds, he was here… and anterior at birth.  S had been convinced baby would not rotate.

Welcome to the world Julian, born earthside on October 30th, 2017 at 1250am, weighing in at 7lbs 13ozs, a whole pound bigger than his older brother and sister at birth!

So proud of this mama for working so hard despite so much mental and emotional stress to achieve her VBAC.  It was not the way any of us had planned or wanted, but it was the journey this sweet little one needed.