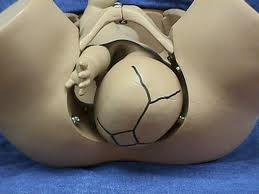 S and K began care with me at the start of the third trimester.  This was going to be their third baby and first home birth. During appointments, we discussed that her last birth was an induction that lasted three hours.  We prepared and anticipated a quick delivery since that seemed to be her pattern. The last couple weeks of her pregnancy, S talked about how she envisioned her birth.  Setting up the birth pool in the living room in front of the fire place, surrounded by close friends and family.  It was planned that big brother J would video the birth. At her last prenatal appointment, S joked that the baby could come any time, but New Years Eve would be nice to avoid because she did not want to worry about what he or she would be doing to celebrate his or her birthday as they got older. About quarter to ten on the evening of December 30, S text saying that she is unsure, but she thinks her water might have broke.  S said she was having irregular contractions, but nothing out of the ordinary.  I encouraged her to walk around, squat and see if any more fluid came and let me know if the contractions changed.  An hour later her water fully ruptured and soon the contractions were stronger and coming in regular waves, every 5 minutes.  I loaded up and got on my way. I arrived at quarter until midnight, just two hours from the first text.  I found K filling the birthing pool and S laying on her right side in the bed.  It was apparent very quickly that we were moving into transition as I could see the bloody show of impending delivery, as well as contractions were coming every 3 minutes, lasting well over a minute long.  S was breathing well through each contraction.  Vitals were beautiful.  As the clock struck midnight, I told S she was welcome to get into the birthing pool whenever she was ready. Contractions very quickly became on top of each other.  S rotated her position with each wave, lastly getting into a hands and knees position.  I was setting out the last of the birth supplies, when S exclaimed, “My body is pushing!”  I asked K if her could see the head as I quickly put on gloves.  He said yes.  I reached down to feel how much of the head was crowning, and found a surprise.  Baby was coming out in a compound presentation.  Here is what that looks like:

Baby grasped onto my finger as the head was continuing to emerge from the perineum.  S said it was burning and I encouraged her that it was normal.  A minute passed and with the next push brought the rest of baby into the water.  S placed her hands in the water and brought her baby to her chest. S and K looked in awe over their sweet, new baby.  After a minute, they realized they hadn’t checked for the gender yet.  They peaked under the towel and S exclaimed, “She’s a girl!” S and K bonded with their sweet baby in the birthing pool for a few minutes and then S decided she was ready to move to the bed.  Soon after getting into the bed, the placenta was birthed. Despite the addition of a hand coming through the birth canal with the head, S had only skid marks and no lacerations that needed repair. Baby girl latched like a champ.  Her newborn assessment was performed and then baby girl and her sweet mama enjoyed an herbal bath. Such an honor to get to serve S and K as their midwife in the gentle, peaceful birth of their sweet baby girl. Welcome to the world Juno Rae!  Born on December 31, 2013 at 12:19am, weighing in at 7.12#, 20″ long.  She is quite loved by her parents and two sweet older brothers.