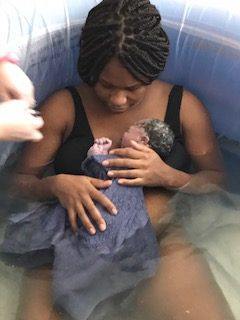 B and S started care with me in the second trimester of their third pregnancy.  B experienced barely making it to the hospital with her last birth, and wanted to have her last baby in the comfort of her home and have a waterbirth.

B’s pregnancy progressed along normally.  B had her previous two babies in her 38th week, so was surprised to make her 39 week appointment with me.  She requested an exam and a membrane sweep.  She was 3cm dilated, 90% effaced, and baby at a 0 station. I felt like her body was preparing for another quick birth this time around too.

At 9am on September 28th, three days later, B sent me a text saying contractions had just started, coming about every 15 minutes, but she felt like this was it.  She was at the grocery store trying to finish up to get home as she was expecting things to move quickly.

Thirty minutes later, B sent a text that contractions were now coming every 8 minutes, and she wanted the birth team to head that way.

I arrived at 1025am, and found B listening to music, laboring peacefully at her counter side.  Contractions were coming every 3 minutes now, and seemed intense.  S was not home, as he had left to do a job before contractions had started.

My birth assistant, H, and I worked hard to get everything going with the birth pool, as B really desired a waterbirth.  However, neither of us are very handy when it comes to the hose attaching to the faucet, and it took sometime, and for my apprentice S to arrive for the attachment to work.

S arrived right after 11am, and B moved to laboring on her stairs.  Things were intense, and contractions were coming every 3 minutes, lasting over a minute.

B stated at 1113am that she was beginning to feel pushy.  When she found out the birth pool was not ready, she was determined to hold out for the birth pool.  The birth team worked hard to get the pool filled as quickly as possible for B to be able to get in.

The pool was deep enough for B to get in at 1125am, and she readily got in and sat in the warm water.

B was laughing and chatting between contractions, but was working hard when the next wave would be upon her.  S was always at her side, supporting her through the waves.

B’s bigger kiddos were at the house, and her daughter was a little scared with everything happening and wanted her mama.  Sweet little one held on to her mama’s hand through contractions.  I told B if we would be helpful her little one could definitely get in the pool with her if she wanted.  She decided it might help, so soon to be big sister got in her bathing suit, and went for a swim in the birth pool for a few of her mama’s contractions.  She was a happy girl being by her mama and getting to swim.

B was feeling more pressure, and was starting to moan with contractions.  She requested an exam at noon, and I found her to be 8cm dilated, 100% effaced, and baby at a +1 station.

B was focused as the throes of transition were upon her.  She did beautifully listening to her body, and doing what her body was telling her to do.

She began to spontaneously push at 1221pm.  After the first push, her water broke in the birth pool.  The pressure intensified, as her sweet baby began to crown a minute later.  She paused, allowing her body to stretch, and then her sweet baby was born a minute later, quite wrapped in his cord!  I unlooped him out of his cord, and brought him to his mama’s chest.

After some stimulation with a towel on mom’s chest, baby K came around and started to pink up and cry.  After all her hard work, her sweet boy was here.

Welcome to the world, Kahvey!   Born earthside on September 28th, 2018 at 1223pm, weighing in at 6lbs 10ozs, 19.5 inches long.  He made quite the fast and furious entrance earthside.  His mom was grocery shopping at 9, and holding him three hours later!  It was a privilege to get to support this family welcome their third little one into the world.  #sacredjourneymidwifery