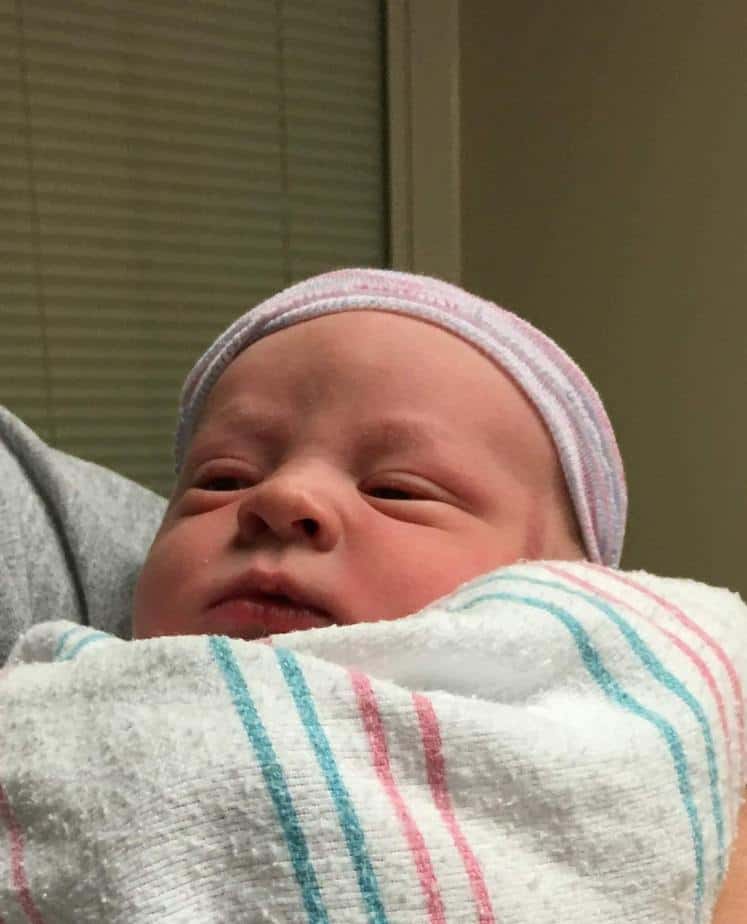 M and D started care with me in the second trimester of their third pregnancy.  M had a cesarean for “failure to progress” with her first delivery, and a repeat cesarean with her second delivery since she had twins.  She was looking forward to getting a chance at things she had not be given before in hopes for a VBAC during this journey.

M had a history for growing “big” babies, and neither she nor D were very comfortable going very many days past her estimated due date. M decided she would like to come in the evening before her due date to try a membrane sweep and some herbs before she went to work to see if it may help get her into labor.  M’s cervix was 1-2cm dilated, 40% effaced, and baby at a -4 station.

M went to work that evening (she is a nurse), and began feeling some stronger contractions than she had felt before.  She decided to head home around 1am, and requested her doula to come a little while later.  Around 5am, she took a nap, and when she woke the contractions had fizzled.  M was discouraged.  I encouraged her to spend the day resting, and to see if she could see her chiropractor that day.  We made plans to try again, if needed, three days later.

Friday came, and M was now three days passed her “estimated” due date.  I told her later I could tell a sweep and herbs were not going to do much within minutes of her arriving.  Her sweet twins were having an off day, and were very clingy.  We repeated some herbs and did another sweep.  M’s cervix was 2cm dilated, 50% effaced, and baby at a -3 station.  I encouraged M to try and get a walk in, and get help with the twins.

Contractions, at times, were similarly to Monday, but never progressed.  M had her inlaws take the kiddos that evening, and planned to come back with D the next morning to try one more time.

M and D came the next morning to get an early start to see if labor would begin.  D was very anxious about baby’s size and uterine rupture.  We talked for awhile, and reviewed M’s wishes.  They mutually decided if they were not in labor that evening, that they wanted to go in to the hospital for a repeat cesarean.  Knowing their wishes, M requested wanting her water broken with the sweep so that we were throwing everything at getting labor going since they had a timeline of comfort.

M’s cervix was 3cm dilated, 60% effaced, and baby at a -3 station.  I reviewed risks and benefits of artificial rupture of membranes, and then broke M’s water.  Right away, contractions were much stronger than any M had felt.  It seemed likely she would enter active labor soon.  I recommended they try to eat some breakfast, and go for a walk before heading home if she felt up to it.

Contractions were regular and felt fairly strong right away.  M and D ate some breakfast, then headed home since things were strong.  It was not long, and they requested their doula to come.  She arrived at 130pm.  M’s doula requested I come fairly soon after she arrived, with my arrival time at 230pm.

I found M laboring on her knees in the living room, leaning over her birth ball, with her doula providing counter pressure during contractions.

I did an exam at about 3pm, and found M to be 5cm dilated, 80% effaced, and baby at a -2 station.  Contractions were coming about every 3 minutes, lasting 50 seconds in length.  M’s doula began doing the abdominal lift and tuck with the rebozo to help baby engage further into the pelvis.

After the lift and tuck, M began alternating between laboring on the birth ball and walking around the house.

A little after 5pm, M was tired and wanted to try a restful position.  We got her into the bed to labor, helping her rotate between her left and right side every 30-45 minutes.  M said she was getting rest between contractions, so we continued to encourage her to rest for awhile.

M got up and walked around some at 7pm.  Since they were wanting to be very conservative with making decisions about transporting, I requested an exam shortly after M got up.

I did an exam at 725pm, and found M to be the same as earlier as well as some cervical edema.  D was very set on the minute there was no progress, they needed to go in.  I suggested trying open knee chest for 40 minutes, then some moving around, and recheck at the hour mark.  D and M agreed to that plan.

M got into open knee chest for 40 minutes as requested, and contractions spaced some.  When she completed the 40 minutes, she walked around the house for a few minutes before being ready for an exam.  At 835pm, I did another exam, and found the same information as earlier.  M and D requested I begin to initiate a transport to the hospital she worked at.

I called and gave a report, and M and D headed to the hospital at 9pm.

The process at the hospital was smooth and efficient, and they proceeded with the cesarean fairly quickly after arrival.

Welcome to the world Kaison, born earth side on March 17th, 2018 at 1052pm, weighing in at 9 pounds, 21 inches long.  M felt empowered by the experience, and was happy to get to be in charge of the decisions towards his birth experience.  #sacredjourneymidwifery