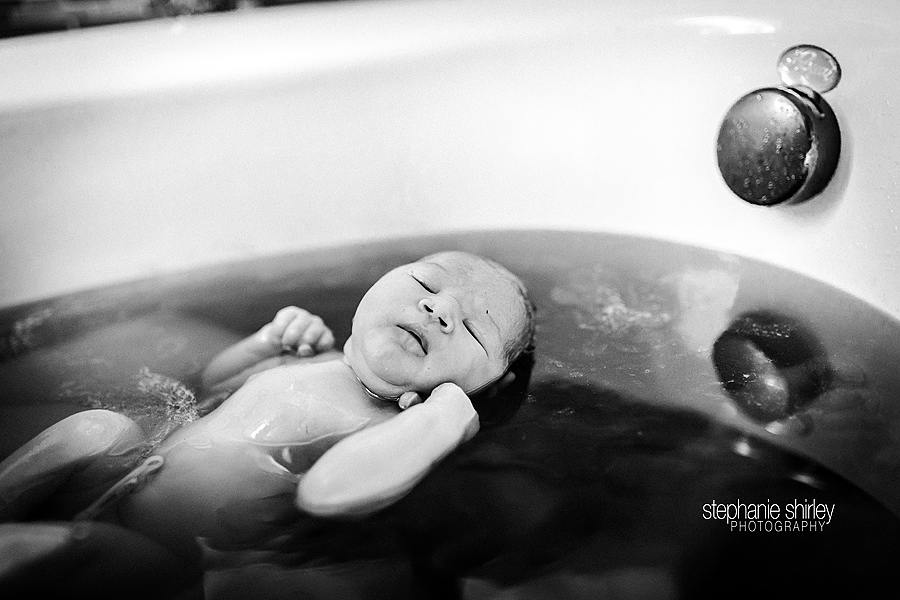 K and M started care with me in the first trimester of K’s third pregnancy.  K had experienced two hospital deliveries, and was looking forward to a different experience with this birth.

K came to the office at 40.3 weeks pregnant for a membrane sweep to help get her early labor phase more active.  She was having contractions and back pressure all night, with contractions now coming every 10 minutes.  K was 2cm dilated, 50% effaced, and baby at a -1 station.  Membranes were swept, and K drank a strong herbal tea as well to help regulate contractions.  I estimated baby to weigh around 8lbs 8ozs.  I talked with K about eating and going for a walk, and keeping me updated on any changes she noticed.

Around 7pm, K let me know that her doula was on the way, and that she was ready for me to head her way.  Her contractions were feeling stronger to her, coming every 2 minutes, lasting 50 seconds.

I arrived a little before 8:30pm, and found K laboring in her kitchen, leaning over the counter with her doula providing hip squeezes.  I checked vitals and timed contractions, noting they were every 2-2.5 minutes, lasting 50-60 seconds.

My apprentice R did a round of lift and tuck with the rebozo with K to help baby’s position.  I knew from earlier that K had a posterior cervix, and we thought lift and tuck could help things move along.

Contractions felt stronger, and K’s doula made her the special labor tea her acupuncturist sent home with her to help accelerate labor.  K labored on the birth ball, contemplating a cervical check and trying to drink her tea in shots because it had a less than delightful taste.

I did an exam at 10pm and found K to be 3-4cm dilated, 90% effaced, and baby at -1 station.  Baby felt acycnlitic at this time.  K decided to rest on her right side in the bed for a few contractions.  Contractions were now steadily coming every 3 minutes, lasting 60 seconds.

K stayed in bed with M and tried to rest in between contractions over the next hour.

K snacked on a banana, while we talked about a plan of action to help make contractions stronger and get little one more on her cervix.

K’s doula recommended doing a forward leaning inversion followed by some rebozo work.  K was such a trooper through all our positions and recommendations.

After that, M did the lift and tuck using the rebozo for another set to help baby’s position.  Contractions were 2-3 minutes apart, 90+ seconds long after doing lift and tuck for a second time.

K had the urge to pull on something, so the rebozo was hooked over the door frame.  K pulled on the rebozo and moved her hips around with contractions.

As 2am neared, K was exhausted and wanted to try and rest.  K and M got into the bed and rested in between contractions for the next couple of hours.

We agreed to do a cervical check at 4am.  K’s cervix was very posterior, so I attempted to manually bring it forward with a contraction.  K was 5cm dilated, 90% effaced, and baby was at a 0 station.  During the contraction, K’s bulgy bag of water gave on my fingers, we confirmed a couple minutes later when K shifted.  I felt terrible as I never want to cause anyone’s water to break.

K got in the shower with M and labored for awhile.  Contractions were much stronger, and K was gently moaning with contractions.

After the shower, K sat on her birth ball in the bathroom and labored through contractions.  Contractions were now coming every 4 minutes, lasting 60-75 seconds in length.

K agreed to a follow up exam at 5:15am to ensure the stubborn posterior cervix was staying more anterior now.  K was 6cm dilated, 100% effaced, and baby at a 0 station.  I felt come caput on baby’s head, and recommended K try a position that may not feel good but can be good for helping with progress and baby’s position.

K moved into open knee chest at 5:25am.  This position works the best if maintained for 40 minutes.  It is tough to do, but K did it.  M, K’s doula, and I were all with her, encouraging her through the 40 minutes.

When the time was up, K moved to her right side.  Things were feeling more intense, and K was starting to hit the wall that most women hit near the end of labor.  K’s doula and I recommended she try sitting in her bath tub to help give her a little comfort.

As 7am neared, K moved to laboring on her birth ball.  Contractions were coming every 4 minutes, lasting 75-90 seconds in length.  K was beginning to feel some pressure in her butt at the peaks of these contractions.

K moved into her bedroom and shifted her position frequently as 8am neared.  K labored on her knees for several contractions, leaning on her bed.  We could tell that baby was putting some pressure now by how things sounded and looked.

K moved into semi reclining on the floor, being supported by her doula for several contractions.  K was working so hard, trying to close her eyes and regain her strength for each contraction to come.

K moved to laying on her left side on her bed around 8:30am, one of us holding up her leg with contractions to give baby room to move down.

K requested an exam at 8:58am to know where she was at.  She was 9.5cm dilated, 100% effaced, and baby at a +2 station.  K agreed for me to hold back her cervical lip, and two minutes later she was completely dilated.

K pushed beautifully, and at 9:09am, baby was crowning.  The head followed a minute later, but immediately made it clear to me that this baby wasn’t going to come easily.  I reduced the nuchal cord I felt around the baby’s neck, but that wasn’t the issue holding baby up.

I told everyone we needed to move her into hands and knees, so we quickly moved her position.  While trying to lift her leg into runner’s position, I was able to get the shoulder to give and we soon had a baby.

I told K she could roll back over onto her back, and M handed their baby to K.  She was here!

This mama was dealt a long, hard labor journey, but she rocked it like a champ!  So honored to have served her through her birth journey.