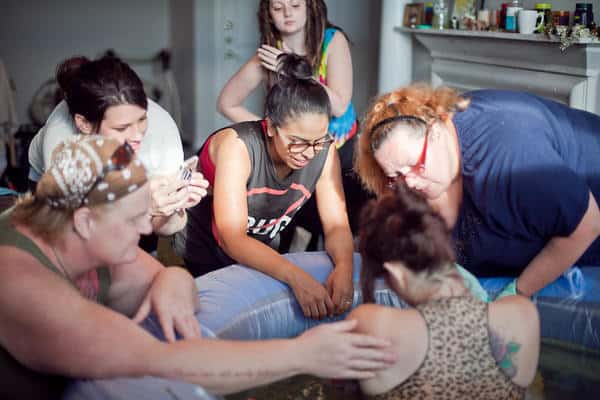 A hired me at the beginning of the first trimester of her third pregnancy.  I was blessed to have served A during her second delivery as her doula for her VBAC.  She rocked her very long, hard VBAC journey.  I was excited to get to work with A again, even more excited to be her midwife for this journey! After having been her doula the last birth, I had made an assumption that A had cervical scar tissue on her cervix.  (Don’t know what cervical scar tissue is?  Check this article out!) A requested to be checked at 37.5 weeks to see if she was dilated/effaced enough for me to feel scar tissue.  A was 1cm dilated, 60% effaced and baby was at a -1 station, and it was very clear that she had scarring on her cervix.  A had an awesome doula, who between she and I, we began to work on her scar tissue near the end of her 38th week. With A’s previous two pregnancies, she had delivered in the 39th week.  This pregnancy, the 39th week came and went.

I saw A for her regular appointment at 40.2 weeks, and worked on cervical scar tissue.  She was 2-3 cm and feeling very “birthy” while I massaged on the scar tissue.  A began feeling crampy right away after I worked on her cervix. The next day, A continued through the prodromal labor cycle.  3:30 in the morning of August 27th, 4 days past her “due” date, A text that her contractions had kept her up and felt different, but she wasn’t convinced it was labor.  By morning, she sent her kids off and tried to rest and relax that morning. After chatting with A later that morning, I packed a bag and decided to head to A’s home.  Knowing that the last labor was a multiple day affair and that this time the father of the baby is out of the picture, I wanted to be prepared and available to support A however I could. A’s doula arrived a little after 11am to work on her scar tissue.  It really broke up this time, and put A in a very active labor pattern.  When I arrived a little after 12, I found A to be contracting every 3 minutes, lasting about 45 seconds. I did a cervical check pretty quickly after arriving and found A to be 5-6cm dilated, 100% effaced and baby at a -1 station.  We all were overjoyed by the major progress in her cervix and that the scar tissue was broken up. Slowly the birth team began trickling in.  A continued to labor as her body desired.

In between contractions, A was chatty, happy.  When the next wave came, things became serious.  It wasnt long, and the surges were much closer, about every 2-3 minutes, lasting over a minute long.

A chose to fold cloth diapers in between each surge.

A alternated between sitting on her ball, hands and knees and laying on her side on the floor.  Her body nudged her to move frequently and she followed those instinctual urges.

A woman in labor is so utterly beautiful

I worked on getting the pool up, and began filling the pool so it was ready for A when she wanted it.  A little after 3 in the afternoon, A moved into the pool into a semi reclining position, her labor play list playing in the back ground. Around 4 in afternoon, P, the father of the baby, stopped by with some popcicles and gatorade for A along with their sweet little two year old.  He immediately wanted to get into the pool.

It was obvious at this time that transition was hitting hard and fast.  P left with their toddler, and A decided she wanted to try to rest in the bed. The surges were on top of each other.  A’s doula was sitting behind her providing counter pressure and massage, while I sat next to A, holding her hand, encouraging her through each surge.

As transition normally brings the feelings of panic and can’t go on, A began hitting her wall.  I could see bloody show leaking between A’s legs in between each surge.  I asked A if she would like me to check her because I thought it might be time.  A breathed through a few more contractions, each one feeling an urge to push.  At 530, A asked everyone to leave the room but me and her doula so I could check her.  As expected, I found A to be 10cm dilated, 100% effaced, and baby at a +2 station.  I asked A where she wanted to have this baby, and she said the water.  She got up to the toilet to empty her bladder with her doula, while I went and warmed the pool water.

A got into the birth pool at 540pm.  She breathed through the next surge.  I put gloves on and told A to tell me when she felt the baby on her perineum.  At 547 she exclaimed, “There’s his head” and began to spontaneously push.

He is right there!

Two short minutes later, A birthed her sweet baby earthside.  I and A’s friend brought the baby to mom’s chest, where I broke and removed the sac.  This sweet little guy is indeed special;  he was born in the caul!  Upon breaking the sac, we found the water to have meconium.  Sweet baby’s head was covered in poop, and I had to fight all instinctual urges to try to wash it off!

There is the sac!

A was surrounded by so much love!  We were all so overjoyed for her! Welcome to the world sweet baby Leo, born earthside on August 27, 2014 at 5:49 pm, weighing in at 7.12#, 21.5″ long.  Your mama was amazing bringing you earthside! Want to see more from this awesome birth?  Go to this link and watch the beautiful photo slide show A’s birth photographer made from the day.