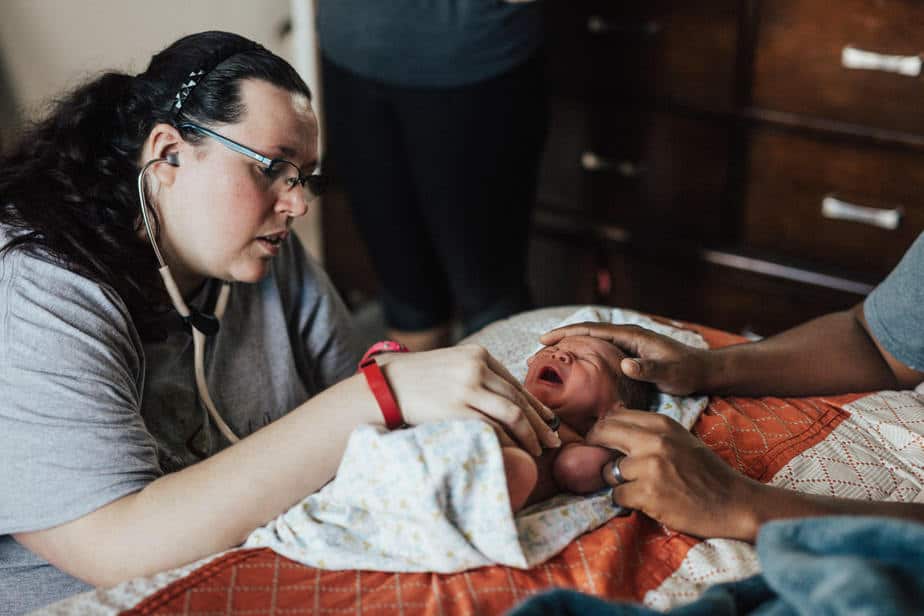 O and A started care with me in the second trimester of their first pregnancy.  O had well researched her birth options, and was looking forward to welcoming her much longed for little one into the world at home!

O’s due date came and went.  She came in at 40.6 weeks for her weekly appointment.  We discussed ways to get her body into labor, and came up with a plan.  O set up an acupuncture appointment, as well as planned to come over the next evening for a membrane sweep and herbs.  I did an exam and a gentle sweep, and found O to be 1cm dilated, 50% effaced, and baby at a -3 station.  The sweep made O be off and on crampy through out the day.

O had her acupuncture session the next afternoon, and then came and saw me the next evening.  She drank my herbal tea blend, and then we did an exam and sweep.  She was 2cm dilated, 80% effaced, and baby at a -2 station.  The cramping from the day before had been doing some good work!  O was already feeling some good cramping waves before she left.  I reviewed stages of labor and when I come, and O and A headed home.

O experienced frequent, short contractions for several hours after the sweep and herbs.  Around 1am, they became stronger and O got into the bath tub which provided some relief.

A called me at 438am, and stated that O was feeling some pressure.  Things were moving quickly!  I got dressed, and headed their way!

I arrived at 509am, and found O laboring in her bath tub with both her doula and A at her side, providing support.  I listened to O through contractions, and could hear those all too familiar sounds of a woman close to meeting her baby.  I told O I could check her in the tub, but I would need her to rotate her body around so I could reach her.  I did an exam at 522am, and found O to be 10cm dilated, 100% effaced, and baby at a +2 station.

O was happy to hear she was close to the finish line.  O began to push with contractions in the pool.  I encouraged her to follow that pressure with each push, to bring her baby closer.

I recommended O try to empty her bladder, since she had not emptied her bladder since about 330am.  O moved from the bath tub to the toilet at 545am, which ended up being such a great position switch!

The pressure changed tremendously on the toilet.  O pushed very effectively with each contraction, and just a couple minutes after moving to the toilet, I could see her bag of water starting to bulge on to the perineum.

With each contraction, O brought more and more of the bulging bag and head on to the perineum.  At 602am, the baby was crowning.

O did fabulous at allowing her perineum to stretch and give her body time for the rest of the journey.  Two minutes later, baby was ready.  Her water broke as the head was born, followed quickly by the rest of him!

This little guy had already passed meconium in his water, so when the water broke, there was meconium every where.

You can see that on the above picture that he was covered in meconium.  You can also see the membranes from the bag of water under my hand in the picture, which is neat sight.

This little guy made no respiratory effort at delivery.  It was definitely my toughest resuscitation to date.  I repeated stimulation, suctioning with the bulb and delee, and performing PPV.

His heart rate normalized after the first minute, but it took several minutes to get this little guy to get used to using his lungs.  These are the times that delayed cord clamping are huge!  His ten minute APGAR was an 8, and he was golden from there.  O’s wonderful doula is also an area chiropractor, who was able to adjust little guy and further help him with breathing.

Welcome to the world Levi, born earthside on July 27th, 2017 at 604am, weighing in at 6lbs 14ozs, 20.5″ long.  It was such an honor to support his sweet parents through the journey to bring him earth side.  He has one strong mama!