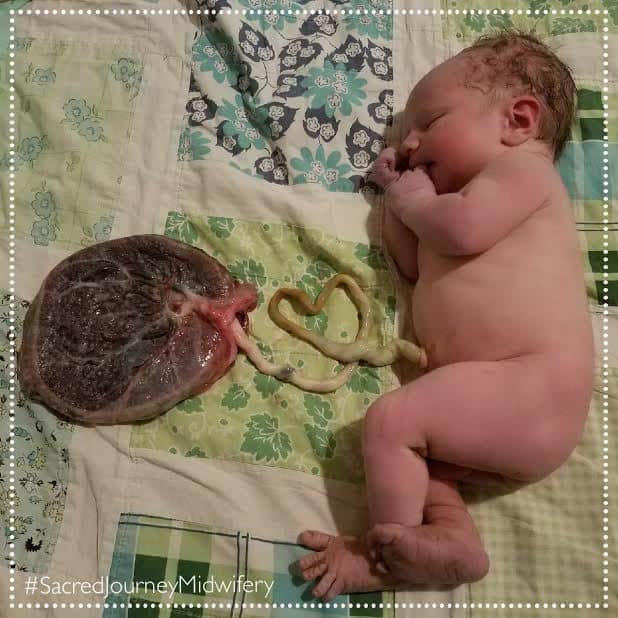 T and C started care with me in the second trimester of their fourth pregnancy.  They were moving back home to Texas, and T was excited to have a much desired home birth for her fourth baby.

T came in for her regular weekly appointment at 40.4 weeks.  She decided she wanted to try a sweep and tea and see if it would get things going.  T had a good relationship with my apprentice, Rowan, so Rowan did her exam and swept her membranes.  T was 1-2cm dilated, 60-70% effaced, and baby was at a -3 station.  Rowan swept her membranes and T’s cervix opened easily to 4cm.  We gave T our special labor tea blend we make to drink as well.

Contractions slowly began.  T tried to rest at home, but gradually things intensified.  At 220am on May 13th, T sent me a message saying her contractions were 2-5 minutes apart, lasting a minute long, and she was starting to shake with her labor waves and felt it was time for the birth team to come.

Rowan arrived, and jumped in to do one of my favorite positions, lift and tuck.  She used the rebozo and did the maneuver for ten contractions.  T was feeling shakey, tired, and weak so we did them with her sitting in the bed.

Around 430am while Rowan was finishing the lift and tucks, I decided to check T’s blood sugar since she kept stating she felt that it was low.  We were surprised to find her blood sugar was rather high.  We had her stop drinking coconut water and eating a banana, and decided to do an exam to see how things were progressing since T was feeling weak.

I checked T at 439am and found her to be 8cm dilated, 100% effaced, and baby at a 0 station.  Her bag was bulgy, and her cervix was very stretchy.  I could tell we would be having a baby very soon.

T moved to laboring in her rocking chair until the birth pool was ready, and while the bed was being prepared.

T got into the birth pool at 446am, and with the next labor wave was grunting at the peak of her wave.  With the next wave, T was spontaneously pushing to bring her baby earthside.

T’s water broke at 459am, and we could see the head on the perineum.  Little guy was a little shocked with his cushion gone, so we encouraged T to push strong with her next wave to get her baby to crowning.

The head was born into Rowan’s hands at 505am, and then the real fun started.  The baby was born a minute later, and we found that he must have been a gymnast in utero.  Little guy had a nuchal cord that was not only around his neck, but also his right arm, and his abdomen!  Rowan and I quickly unraveled him under water and brought him to T’s chest.  He was here!

This was very special as this was Rowan’s first time helping catch a baby!