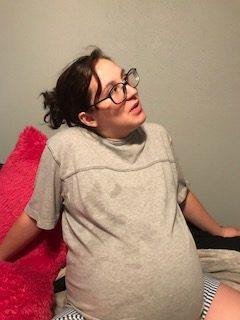 Birth Story of Margo and Hendrick

This is a unique birth story to share.  I was honored to have helped A welcome her own baby into the world at home a couple years ago, you can read my version here and her version here.  This time, A was being a surrogate for a couple who were excited to be welcoming TWINS into the world.  Due to legalities and safety concerns from the parents, A was having these babies in the hospital, with me by her side to support her through the process.

At 36 weeks gestation, A decided she wanted to try and see if a natural encouragement would help get her in labor and avoid interventions her OBGYN was wanting to soon make happen.

A came over around 11am on the morning of June 17, 2017 for a membrane sweep and herbs.  We were all surprised to find A was a very stretchy 4cm dilated, 100% effaced, and baby A was at a -1 station.  I swept her membranes, and she easily opened to 5cm.  She hung out at my office with her second doula, M, while we did herbs for a couple hours and some positioning techniques.

A headed home around 1pm with the mission of a nap and some “home work” that I knew should get her uterus contracting.

A was beginning to get more uncomfortable as 4pm neared.  She asked me to come, so I prepared and arrived at her home at 445pm.  Contractions were coming every 2-3 minutes, 60 seconds long.

A wanted to be checked so I did an exam.  She was 6cm dilated now, however I felt that her cervix was beginning to swell so I requested she did open knee chest for 40 minutes to help with the swelling on her cervix.  M sat and entertained her at the front, while I sat at her back and did counter pressure with contractions.

After the 40 minutes were up, A got up and moved around.  She stated, “My labia hurts so bad.  I feel like its going to fall off and roll down my leg.”

What made it funnier is when her toddler came into the room a few minutes later and informed us all that “there is a bug on my labia.”  We all busted out laughing.  M provided counter pressure while A moved around the room.

I suggested we go out for a walk.  We went outside at 550pm, where I attempted to get A to walk at a vigorous pace but she thought I was funny about that!

The contractions were coming regularly and strong during the walk.  We came back to the house around 610pm for A to hydrate.  She remembered a birth she had been at with me where the client had eaten cheesecake in labor, and she decided she really needed some cheesecake.

We joked about Golden Girls while A enjoyed her few bites of cheesecake, having to breathe through contractions every couple of minutes.

A agreed to do another round of ten contractions for lift and tuck, so M got ready to do that.  It made the pressure and contractions stronger, so A decided she was ready for another exam.

It was now a few minutes passed 7pm. A was 7cm dilated, 90% effaced and was having a good amount of bloody show.  Since she was 25 minutes from the hospital, she decided she wanted to go ahead and head that way.

We arrived at the hospital at 745pm. The hospital A had chosen to have the babies at was a smaller hospital, so small that they have no doctors at the hospital.  When we walked in, A was so chill that the nurses did not believe she was really in labor.  When they checked her and found that she was 7cm, they immediately moved her from triage and into a labor suite.  She was the only laboring patient at the hospital that night.

Now this is where things start turning south.  They couldn’t get the second baby on the monitor for anything.  When they finally found baby B, it looked very possible that baby B was no longer head down.

The on call OB arrived around 830pm, and performed an ultrasound where he found baby B to now be breech.  He talked with A and said he had no problems delivering since baby A was head down, however he demanded that she needed to get an epidural as he guaranteed he would need to stick his entire hand up her vagina to get the second baby out, and he wasn’t going to tolerate her fighting and squirming on the table.

A asked for time to think.  She and I walked into the bathroom, and talked.  She was upset about the treatment, but decided an epidural was better than a cesarean, and if she met him half way, then maybe he wouldn’t push a cesarean.

He came back into the room, and began to bait and switch.  He realized her doctor would not do a vaginal birth with baby B breech, and started listing off all the reasons why they should go back to the OR for a surgical birth.  We were all fuming mad.

At this point he did an exam, and found her to be 7cm.  He asked for an amniohook.  I told A that he was going to break her water, was that okay?  A immediately said, “I do not want my water broken.”  However, he didn’t care.  He broke it anyway, and said that he wasn’t going to be stuck there all night.

His great plan of breaking her water came to back fire.  Her IV had just been started, so she did not have enough fluid to get an epidural.  A was in the throws of transition now, with out her bag of waters, and they thought she could just hold out.

The anesthesiologist began to aggressively pump bags of fluid into her with a special tool.  A was feeling cold and shaky, a combo of the hormones and the fluid.  In a brief, humorous moment, A mentioned that she forgot to get a blender to make her placenta smoothies, and the anesthesiologist had a mini freak out.  We all laughed.

By 945pm, she finally had enough fluid that she was ready for the epidural.  We left the room, returning at 1010pm after it was placed.

I knew things were close, and asked for the surgical scrubs so I get dressed.  The nurse placed the catheter, and quickly found A was 10cm.  I quickly dressed, with the help of M.  The OB verified the check, and wanted to get her in the OR.  The catheter was promptly removed (this is key for a later issue), and A was wheeled to the OR to get settled.  I waited outside until they were ready for me.

Like a boss, A pushed out baby A quite easily and swiftly at 1035pm, weighing in at 6lbs 1oz.  The real fun came with baby B.  It sounded from the dialogue that baby B was footling breech.  The doctor was all up in there trying to grab a foot.  He finally succeeded, and a huge gush of amniotic fluid was all over the place, followed by some legs and butt.  The doctor was very hands on the breech, and chose to use forceps to aid the delivery of the head.  Baby B was born at 1043pm, weighing in at 5lbs 12ozs.

Quite amazingly, A had no tearing from pushing out two babies and all the manipulation with the delivery of the second baby!

We arrived back in the labor room at 1101pm, for A to have postpartum monitoring.  I helped A begin to pump colostrum.

The next three times the nurse came to check the firmness of A’s fundness, A passed a large amount of clots and bleeding.  The nurse seemed perplexed by this.  After the third time, I placed my hand on her fundus and told A that she needed to try to pee.  Her fundus was way too high due to the fullness of her bladder.  Everyone had forgotten that A had only had a catheter for a couple minutes, and hadn’t had her bladder emptied in quite awhile.

It was quite a different experience for A, but she definitely feels if she decides to be a surrogate again, she wants to do it back at home.

It was such a privilege to support A through another birth journey.  She is amazing!  #sacredjourneymidwifery