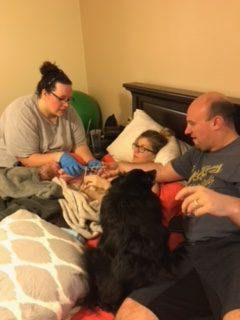 K and Z started care with me in the first trimester of their first pregnancy.

The morning of October 5th, 5 days before her due date, K sent me a text stating she had been having bloody show and contractions that were 4-8 minutes apart, lasting 90 seconds for the last two hours.  She was unsure if she should go to work this morning, in which I told her no.  It sounded like early labor, and that she should focus on preparing for the journey ahead.  We discussed that she should eat breakfast, take a walk, and check back in.

At 10am, K had finished her walk, and found her contractions were 3.5 minutes long, lasting 30-45 seconds.  We decided she would go into the office for an adjustment (K is a chiropractor), and then come over for an assessment.

K arrived at my place right at noon.  All vitals were normal, and contractions were coming every 3 minutes, lasting 35 seconds.  I did an exam and found K to be 3cm dilated, 100% effaced, and baby at a 0 station. I swept her membranes.  We were both surprised that her water was actually broken when she arrived.  K was unsure when that happened.  We discussed some positions to try at home, and when to call her doula and myself over.

K went to the grocery store, and then went home and napped.  Contractions became much stronger, and K decided to call her doula over at 330pm.

K’s doula, J, kept me updated from there.  By 530pm, J said it seemed like I should head over, as contractions were frequent and long.

I arrived a little after 6pm, and found K laboring on the birth ball.  At 630pm, I did an exam and found K to be 7cm dilated, 100 % effaced, and baby at a +1 station.  K decided she would like to try laboring in her bath tub while waiting for the birth pool to be ready.

K labored so calmly in the bath tub, while the birth pool was filling.  J played some music to help.

A little after 7pm, K moved to the toilet.  She was feeling a lot of pressure, and was beginning to get the shakes.  As soon as we heard the pool was ready, K readily moved to the waiting birth pool.

K moved to sitting in the birth pool at 722pm.  Her body was beginning to push on its own at the peaks.  K moved to leaning over the pool 15 minutes later, pushing more with each contraction.

K began to push with each contraction.  Baby did not like that a whole bunch, so we began to administer a homeopathic to help with oxygenation.  That worked beautifully.

At 8pm, K moved into semi reclining, and began to push while doing tug of war with the rebozo with J.  K was pushing powerfully, and we could see the head peeking on the perineum, but the baby wasn’t coming any further.

The birth stool was the magic spot. The head was staying visible on the perineum a few moments later.  The head was crowning at 833pm.  K did an excellent job of letting everything stretch, birthing the head a minute later, followed quickly by the rest of the body.  Baby was wrapped in his cord that I quickly unraveled, and brought him to K’s waiting arms.  He was here!

Welcome to the world Max, born earthside on October 5th, 2017 at 834pm, weighing in at 6lbs 6ozs, 20.25 inches long.  His mama was so poised and peaceful through her labor journey, and powerfully brought her sweet little one earthside in the comfort of her bedroom.  It was such a joy to serve this family!  #sacredjourneymidwifery