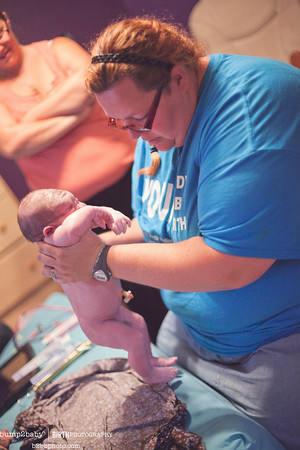 I was blessed and honored to be B’s midwife with her last pregnancy, and was excited to once again serve her as her midwife for sweet Miles birth. Before sharing Miles birth story, parts of B’s previous birth stories must be shared.  B’s first baby was a hospital augmentation.  Unmedicated, and baby girl was 7#.  Soon followed baby girl #2.  B decided she wanted to have a different birth experience.  This birth was hard and showed B how strong and capable she was.  3.5 hours of pushing off and on as baby girl would come down and turn her head, sometimes leaving her completely dilated, sometimes bringing cervix back a little.  Baby girl was 9.6#.  Both girls were born a couple days before their expected birthing dates. B’s third pregnancy was fairly uneventful health wise.  Weight gain was less and she looked smaller and baby felt smaller initially with this baby than she did with her previous. B made her expected birthing date, which is something that had not happened in the past.  At 40.5 weeks, I woke up to a text from B asking if she could come over that morning for a membrane sweep.  I did a check around 9am, and found B to be 1-2cm dilated, 70% effaced and baby low at a 0 station.  She began feeling crampy and was going to a doula’s house nearby to work on positioning.  She returned a couple hours later for another sweep.  After the sweep she was 3-4/80/0. Contractions began almost right away, mild and irregular, but slowly over the afternoon they got closer and longer.  She took a nap that afternoon to build up her energy for the active labor journey.  Around 730 Sunday evening, B text me her contractions timer.  Contractions were every 5-7 minutes, lasting a minute long.  Some were feeling stronger than others.  B called her doula to start making the trip to her so she was there before she really needed her. Close to 1030 pm, B’s doula C (have I mentioned how much I love doulas?  They are amazing.) text me that contractions were every 2.5 minutes, lasting 45 seconds, but weren’t really intense.  C said she would take her curb walking and keep in touch with me. A little after midnight, C text that contractions were every 2-3 minutes, lasting a minute.  B was moaning, and wanting me to come. I walk into the house to sounds of B moaning.  I could tell she was laboring much harder and different this time than she had last time.  The birth pool was blown up and I asked for it to be filled while I did initial vitals on B.  All vitals were great and B agreed we should do a cervical check.  6cm dilated, 100% effaced and baby was low at a +1 station.  Close to 1:40am, B got into the warm birth pool.

Isn’t she gorgeous?!  Makes me think of the Ina May quote…  “If a woman doesn’t look like a goddess during labor, then someone isn’t treating her right.”

220 B decided to get out of the pool for awhile.  She got in hands and knees in her bed, then moved to left side lying to get some rest.  Her wonderful doula was at her side, providing counter pressure through the contractions. B was able to get rest between contractions.  It is amazing how deep the sleep can be in those 1-3 minutes of rest women get between contractions.  B rested well, moaning with each contraction, and then back to sleep. At 3:49, B asked for a cervical exam.  She was 8cm/100%/+1.  Things were moving along. B got into hands and knees in her bed again.  Nausea waves began overtaking her.  My heart goes out to mama’s in labor when vomiting begins.  Labor is hard enough work without vomiting! A little after 4am, B got back into the birth pool, alternating between hands and knees and semi reclining.

B’s doula loving and supporting her.  <3

At quarter to 5, B asked me to check her again and to please break her water.  I smiled and told her let’s just do the check first.  I was quite sure there was no need to artificially rupture her bag. B had a very thin, stretchy anterior lip of cervix left (9.5cm), completely effaced and baby was at a +2 station.  I talked with B about holding the lip back during contractions, and she agreed.  Two contractions later the lip was reduced and baby was +3, moving quite well through the birth canal.

Only 8 minutes after being checked and the being told she had a lip, B birthed her baby like a champ.  Something extra special about this little guy, is he was born en the caul, which means his membranes did not rupture until he was birthed.

The first feeding…  Such a beautiful photo.

Just a note, when us midwives say have straws on hand for birth, this is why.  It avoids you having to use your toddler’s sippy cup.  🙂

Welcome to the world Miles Preston.  Born on July 21, 2014 at 5:02am, weighing in at 9.4#, 20″ long.  While pregnant with her second, B was told by an OB and another midwife that she would never be able to birth a baby bigger than 8#.  She showed them…  TWICE!  Women’s bodies are freaking amazing!