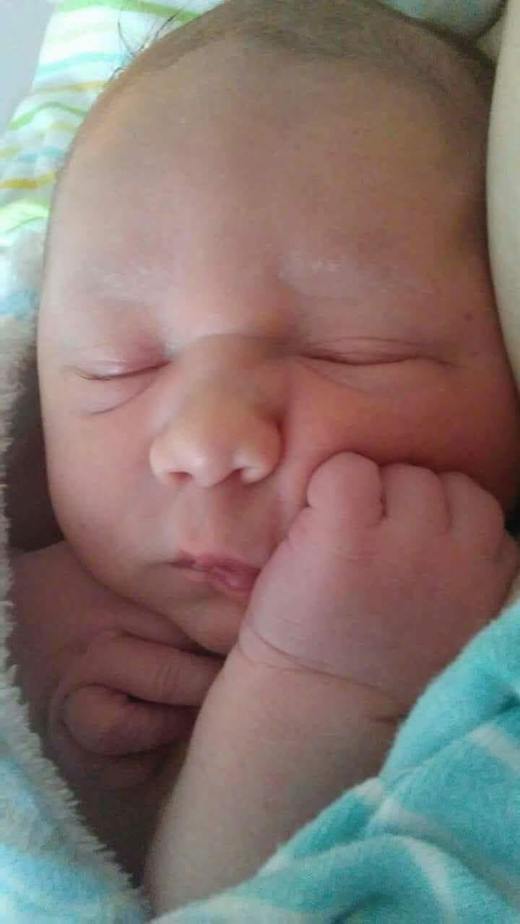 R and B were surprised to find out they were expecting their fourth child when they were well into the second trimester.  R began care with a hospital provider, as I was set to be on vacation during her due window.  I told R if she was still pregnant when I got home, then I would help her have her home birth.  R and B had been under my care for their third pregnancy, which you can read about here.

R waited for me, so we had plans for her to see me at my office the day after I returned for a prenatal visit.  At that visit, we planned for her home visit, if she was still pregnant, for in three days.  Unfortunately, R and B’s home was flooded during the hurricane, and they just moved into an apartment the same day I returned.

I arrived at R’s home for her home visit the morning of September 21st.  R was feeling anxious about her 41 week ultrasound the next day.  We talked through her fears, before moving into doing her vitals.  R had been doing home monitoring of her blood pressures, which had been normal.  However, we were starting to now see an upward trend.  After seeing the blood pressure, R said she wanted to do a natural labor encouragement to see if it would get things going, and not have to worry about having a hospital birth.  I went to my van for the ingredients for the herbal tea, and R drank that.  I then did an exam and a membrane sweep.  R was 2cm dilated, 50% effaced, and baby was at a -3 station.  I worked on her cervical scar tissue and did a sweep. I reviewed labor precautions with R, and then headed home.

Contractions soon began after I left.  R organized getting her kiddos to childcare so she could focus on herself and her journey.  Although regular, things stayed manageable and mild through out the day.

Around 7pm, a shift happened after they did a set of lift and tucks during contractions.  After talking for a bit, we decided I should head her way.  While I was en route, R sent a message letting me know her water had broken.

I arrived right at 8pm, and found R at her bed side, rocking and moaning with contractions.  I did an exam and found R to be 4cm dilated, 80% effaced, and baby at a -2.  Having been R’s midwife before, I knew that we might be at 4cm for a bit, but had a plan for when baby got low enough to do positions that would help.

While the birth pool was being filled, R decided to labor on her birth ball for a few contractions.  When the pool was almost ready, I suggested B helping R do another set of 10 lift and tucks with the rebozo since they seemed to have been effective earlier.  R agreed.  She wanted to do everything to make this baby come out at home!

R got into the birth pool at 940pm, first laboring on her knees, then moving to sitting.  Contractions were coming every 3 minutes, lasting 45 seconds.

R enjoyed laboring in the pool, continuing to alternate her position between kneeling and sitting.  An hour passed, and R was feeling a lot more pressure in her hips and bottom.  She was becoming more vocal with contractions.  As things continued, she asked B to speaking encouraging words over her.

Around 1115pm, R asked for an exam as she was concerned about the presence of scar tissue on her cervix still.  She was 5cm, 100% effaced, and baby at a 0 station.  I felt some molding on the baby’s head and some minor edema on the cervix.  I requested R to get out of the pool for a position change.  Things were very intense, and she was unsure of her strength, which B and I quickly reminded her that she was strong enough for this.

After hydrating and emptying her bladder, R got into the open knee chest position at 1130pm.  I reminded R that it would be uncomfortable, but 40 minutes in this position can work some magic at helping baby to further descend and dilate the cervix.  R was such a trooper.

I was helping drain some water out of the pool, when I was called back at 1150pm.  R said she was feeling some poopy pressure at the peaks.  I told her that was perfect.  I sat back with her, helping to encourage with each labor wave that she worked through.

1207am, a shift happened, and R stated, “Baby is coming down!” as she uncontrollably began to grunt at the peak.  She was almost at her 40 minutes, so I told her one more contraction like this, and we could change positions to have a baby.

The baby came tumbling down the birth canal, and R could not help but push at 1210am.  She moved out of open knee chest, and ended up flat on her back because she didn’t have time to do anything else.  The baby was crowning at 1211am.  After helping R adjust slightly, she brought her sweet boy earthside at 1215am.  He was very raveled in his cord, and it took me a minute to unravel him, but soon he was on his mama’s chest, exactly where she wanted him!  She did it!  She had her baby at home!

Welcome to the world, Orson!  Born earthside on September 22nd, 2017, weighing in at 8lbs 4ozs, 20.75 inches long.  Him and his mama worked beautifully together to have the home birth R had wanted for so long.  So happy things worked out for me to help R have this birth she desired!