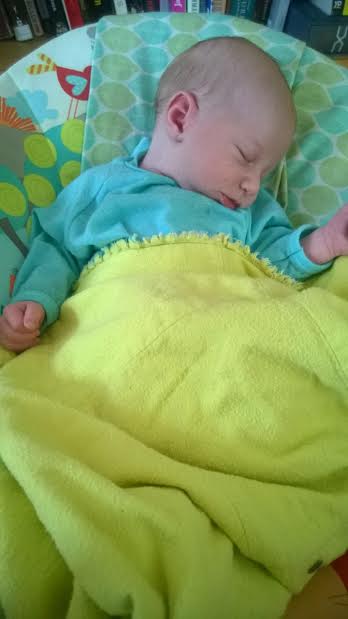 O and D started care with me in the first trimester of their third pregnancy.  O’s previous two children had been born in the hospital, and she desired a different experience this time.

O’s previous babies had been born closer to 42 weeks, so we very much expected this little one to follow suit.  When 42 weeks neared, O agreed to come in for a membrane sweep and tea to see if it would get labor going.  She was 2-3 cm dilated, 50% effaced and baby was at a -2 station.

Irregular contractions persisted through out the day.  At 2am on August 2nd, O woke to stronger contractions.  At 7am, D said he felt it was time for to come over.

I arrived at 745am and found O laboring in her room, leaning on her dresser during contractions.  Vital signs looked as if O was dehydrated so I start pushing fluids in between contractions.  O preferred waiting a couple hours for an exam.

O got into the birth pool at 832am, and her body relaxed.  A little after 9am we saw that her body was a little too relaxed as her labor waves were now coming every 4-10 minutes.  I encouraged O to move around the pool and change her position frequently and see if it helped pick things back up.

O got out of the pool a little after 10am and we decided to do an exam.  Her cervix was 6cm dilated, 100% effaced and baby was at a -1 station.  I recommended trying the abdominal lift and tuck for ten contractions, and work on doing some other positions outside of the pool to help contractions to pick up.

We noticed contractions would come close and steady when O was upright, but if she would sit to rest they would space to every 8 minutes.  O was feeling tired.  We discussed resting and then look at trying some herbs and/or consider rupturing the membranes if O and D wanted to do that.  Another nap sounded good, so right around 2pm we got O and D positioned comfortably back into bed.

At 3pm, I did another exam and found there to be no cervical change and a bulgy bag of water.  After discussing risks and benefits and answering questions, O and D decided they would like O’s water to be broken.  At 315pm, I broke her water and right away the contractions picked up.

O labored standing for a few contractions while the birth pool was quickly warmed up.  O got into the birth pool at 341pm and alternated between kneeling and sitting, finding it more complicated to find a position that was comfortable.  Contractions were coming every 4 minutes, lasting 70-80 seconds.

4pm came and O was working so hard.  The pressure was building.  O was questioning how much longer she could go on.  We gently encouraged her that the end was near.  Everyone kept changing out cool rags to keep O comfortable.  D stayed by her side, offering comfort.

I could hear the primal grunting that baby was very near at 430pm and got my gloves on.  O began to spontaneously push at 433pm.  The baby was quickly on the perineum and at 435pm, sweet baby boy was in O’s arms.

Welcome to the world Perseus, born earthside on August 2, 2016 at 4:35pm, weighing in at 8lbs 4ozs, 20″ long.  His mama worked so hard to bring her sweet boy peacefully earth side.  It was such a privilege to serve this family and helping them have the birth they desired.  #sacredjourneymidwifery