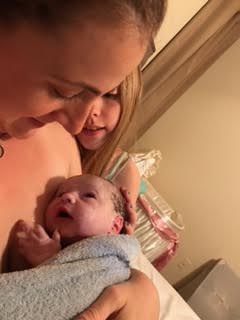 K and M started care with me at the end of the second trimester of their second pregnancy.  K’s pregnancy progressed along beautifully.

On May 26th, the day before her due date, K was experiencing a lot more cramping and braxton hicks.  I found her cervix to be dilated 1-2cm, 80% effaced, and baby was at a -2 station. I swept her membranes, and gave her an herbal labor tea blend.  We discussed going for a walk, and letting me know how things progressed.

Contractions continued to increase in intensity and become more frequent through out the day, taking a change into active labor around 8pm.  K and M asked me to come at 1045pm as the contractions were very intense and lasting a minute long.

I arrived at 1135pm, and found K peacefully laboring in her bath tub.  We did a check in on how things were going.  Contractions were coming every 3 minutes, lasting over a minute long.

K moved to the toilet as midnight drew near so that I could do her vitals.  I could tell by physical changes that things were moving along, and the exam completely agreed!  K was 7cm dilated, 100% effaced, and baby was at a +1 station.

K labored sitting on her bed, while waiting for the birth pool to finish filling.  Nausea was starting to come in waves.  Contractions were coming every 3 minutes, lasting 75 seconds after the exam.

As the pool was almost ready, K decided to move to the toilet before the birth pool.  She was starting to feel some pressure now as it seemed the baby was moving down.

K sat in the warm water of the birth pool at 1251am.  She was feeling warm, so we began to apply cold wash clothes to her forehead and neck to help keep her cool.

As 130am drew near, K said the pressure was getting to be intense, and she felt as if her body was pushing at the peaks of the contractions.  I encouraged K to allow the pressure to build until it was unbearable.

As 2am was nearing, K decided she would like an exam.  She had an anterior lip, and baby was at a +2 station.  I discussed options, and K decided that she would like me to reduce her cervical lip.  Within two contractions, the lip was gone.

At 201am, K’s water broke.  Baby was shocked from her cushion being taken away, so we gave K a homeopathic every few minutes to help with the decelerations in her heart rate.  It worked like a charm, and soon little one’s heart beat had normalized.

The baby’s head began to crown at 214am, followed by the birth of the head and baby a minute later.  Sweet Raelynn was here!

Welcome to the world Raelynn, born earthside on May 27th, 2017 at 215am, weighing in at 7lbs 4ozs, 20″ long.  It was such a blessing to support this sweet couple through their peaceful, gentle home water birth.  #sacredjourneymidwifery