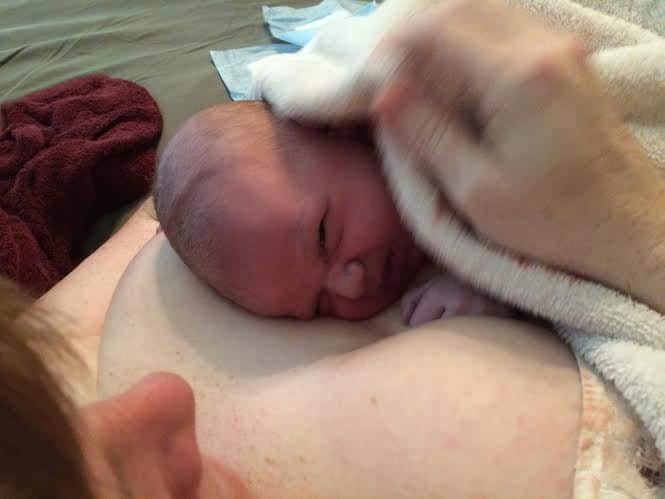 M and D transferred care to me at 22 weeks pregnant in their second pregnancy.  They were hoping for a VBAC, and felt that their best chance at a vaginal birth was no longer in the hospital setting, but at home. M’s first delivery ended in a cesarean due to baby being breech.  It was very important to her that everything was done to ensure a successful VBAC.  She hired an awesome doula, took a childbirth class, educated herself.  She was ready to have this birth her way. Three days after her estimated due date, M had an acupuncture session done to encourage her body to go into labor, and saw me for a membrane sweep.  She was 3cm dilated, 80% effaced and baby was low at a 0 station. She had irregular contractions all day that day.  She called me later that evening thinking her water broke.  After an assessment, I determined it was not her water.  We talked over positions to try, took a walk and talked over fears.  I assumed I would be hearing from her sometime the next day in active labor. I touched base with M the next morning.  She text that she rested well through the night, but contractions definitely changed around 6am, and now were coming about every 5 minutes, lasting 30-60 seconds, and was feeling nauseous and some pressure.  I encouraged her these were good things.  I was going to do a home visit with a patient and keep in touch. M decided she would be calling her doula, and then ask me to come after a bit. Her doula arrived around 9am, and text me an update that contractions were every 8 minutes, lasting 45 seconds and that M was very nauseated.  She was going to take her on a walk. Within an hour contractions were every 4 minutes, lasting a minute.  Her doula commented that she was starting to moan through some contractions.  I responded that D should probably get the birth pool blown up. I arrived shortly after 11 and found M in the shower.  Her demeanor was much different from the day before.  Things were definitely more serious.  Contractions were every 5 minutes, lasting 60 seconds by my watch.  M agreed to a check and was 6cm dilated, 100% effaced and baby was at a +1 station.  I told M how amazing she was doing.  I encouraged her to get up and do what I call “Wild Captain Morgan” or in other words lunging with hip circles. The pool was already being filled and M was anxiously awaiting for me to tell her to get in. Shortly before noon, the pool was ready and so was M! M sat forward leaning in the pool for awhile, then moved to semi reclining.  We put on the hypnobabies affirmations for labor tracts for M to have to focus on through the contraction waves. Around 1230, she mentioned she was definitely feeling some pressure with contractions.  The pressure kept increasing, so M agreed to a check around 1245.  She had an anterior lip, 100% effaced and baby was at a +2 station.  The lip was fairly stretchy, and M preferred to try to push without my help at reducing the lip. She moved into hands and knees position while pushing.  As 1pm came, the lip was gone and she was completely dilated. M continued to push through the 1 o’clock hour changing her position every few contractions.  She pushed in a lunge, then on the birth stool, then back in hands and knees.  At 1:40 she commented her water broke.  Her fluid was clear and baby sounded perfect. As 2pm came, M commented she was feeling really tired, so we talked and M decided she would like to move to the bed to push so she could rest in between.  She layed on her left side and pushed during the contraction waves, and rested in between. At 230pm, I encouraged M to get in a semi reclining position, leaning back onto D to help baby get under the pubic bone.  It was the position she needed because soon, we could see head right at the perineum. M’s doula asked her if M wanted to announce the sex of the baby or if M wanted us to.  Her response was unusual to me.  Most couples who wait want to announce themselves.  M said we could announce.  Later I would understand the response. At 251pm, the head was crowning following with the birth of the baby at 252pm.  After a few moments passed, I asked M if she looked if her baby was a boy or girl.  She said no, so I lifted the baby up so she could see.  Her and D looked, then looked at each other puzzled and shocked.  “It’s a girl.”  M lifted the baby back up and said again, “It’s a girl?” We all quickly learned the tale.  M had the panorama blood screen done with her previous provider, but did not tell anyone.  The results came back that she was having a boy.  So needless to say, this baby being a girl was a huge surprise.