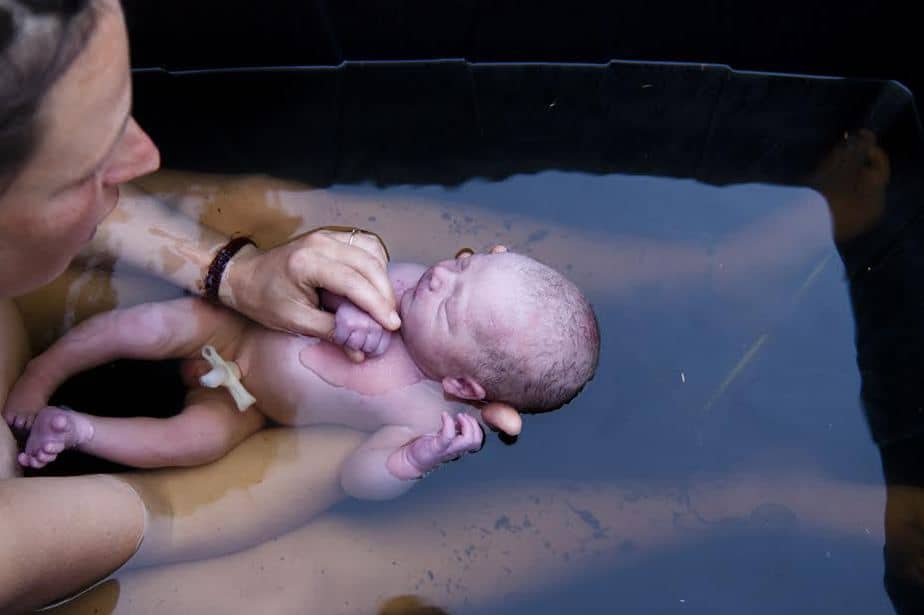 S and T started care with me in the first trimester of S’s fifth pregnancy.  S had her previous baby with me two years prior.  You can read about that journey here.

I did S’s home visit at 36 weeks.  S was nervous about baby’s position, feeling that he may have moved posterior.  Once I felt, I agreed baby had moved ROP (right occiput posterior).  I encouraged S on positions to encourage baby to move into a more ideal position, and talked to help calm fears.

I saw S about a week later,  Baby was now in the most ideal position, LOA (left occiput anterior), and S asked if I could help her with side lying release and rebozo sifting so my apprentice R and I helped her do those things.  We could all feel the sense of relief that S was feeling.  I had a feeling I would be called soon that labor was on its way.

Sure enough, T called me a few hours later to let me know that S was experiencing regular surges that were building in intensity.  S’s last labor went quickly and I made it by minutes, so we were hoping to have me come sooner than later.  T said it wasn’t time yet but he felt like once they got home and set up that things would move along quickly.

Things stayed irregular and no change in intensity the rest of the evening.  I checked in at 10pm and headed to bed, sure I would get a call in the night to come.

T called at 3am describing painful contractions that seemed abnormal.  I headed over right away and found S and baby’s vitals to be perfect.  S was laboring in the birth pool when I arrived.  I did an exam at 4am and found S’s cervix to be 2cm dilated, 50% effaced and baby at a -2 station.

Surges were hard to time.  I recommended to S to get out of the pool to help strengthen the surges.  S agreed, but was worried about the sharp pains she felt out of the pool that the warm water seemed to alleviate.  We discussed trying some positions and navigating what might be causing the pain.

S got out of the pool at 430am.  I helped wrap her belly with a bind to help change baby’s position on her cervix and hopefully get things progressing more.  Surges seemed to be coming now every 3-4 minutes, lasting 30-45 seconds long.  We began to use clary sage oil periodically to help with contractions.

As 5am neared, S and T decided to go for a walk.  When she arrived, the wrap wasn’t helping anymore.  S took the wrap off and labored on her hands and knees.

We were sitting in the living room.  After E finished working on the ligaments, I suggested S try to do a forward leaning inversion through one surge followed by belly sifting with the rebozo to help loosen the tight ligaments.  S was such a trooper and did most anything I suggested.

S decided to get back into the pool during the 7am hour, but the surges spaced out, coming every 7 minutes, lasting 30 seconds.  We began to do cohoshes to see if contractions would strengthen.

I did an exam at 830am and found S to be 3cm dilated, 60% effaced, and baby at a -2 station.  S agreed to me sweeping her membranes.  She was feeling very emotional over the exam and how her birthing time was going.  We surrounded her with comfort and words of encouragement, and I recommended S get out of the pool and go for a walk to get things moving.

After S returned from the walk, she sat on her birth ball outside while T made her some breakfast.  S felt like things were more intense and that her cervix was shifting.  Surges were coming every 3-4 minutes, lasting 60 seconds long while she ate eggs and bacon.

At 1050am, I sat down and talked with S and T.  I asked S if she felt like she had anything on her mind that could be causing a stall.  S couldn’t think of anything.  I suggested to S and T that maybe they could spend an hour or so in the RV alone, just to snuggle, rest and reconnect as maybe just being able to talk and reconnect could help alleviate what was going on or bring to surface the issue.  They agreed that that sounded like a good plan.  We kept their older children outside, E eventually taking the kids to the nearby park to occupy their time so that S and T could have some privacy.

I recommended S get up and get moving in the 12pm hour.  She agreed to try some more tea and sipped on that as she moved around on the patio.  S sat on her birth ball in the middle of the yard at 1pm, seeming tired and frustrated.  Her doula was at her side, as the girls played in the yard.

Then it came to them.  Around 130pm, T suggested to S that maybe she was stalled because S’s oldest daughter K was not at the birth.  S began to weep.  Her other three daughters were there, but K was missing and K had been present at all the births.  T called K, and E left to pick her up.

Just like flipping a light switch, with this powerful realization S’s body came alive and surrendered to the birthing journey.  S’s friend C quickly began finishing the refilling and warming of the pool.  Surges were coming fast and furious now, obviously stronger.

S moved to the birth ball beside the birth pool.  She stated she felt so much more at peace knowing that K was on the way.

S got into the pool at 230pm, laboring on her knees.  She felt like her water was going to break soon as there was so much pressure.  I had R staying in touch with E on her arrival time because I knew how important it was to S for K to be there, but also knowing at the same time that S would hold on to that baby until she felt everyone was there who needed to be there.

K and E arrived at 245pm and S felt so much relief.  Her water broke two minutes later, her body was ready to finish this journey.  She moved onto her side as the urge to bear down began to build.  S began to spontaneously push at 250pm, followed with her sweet baby’s head crowning a couple minutes later.  S held on to the crown of her baby’s head, gently guiding the baby out little bit by little bit with each surge.  The head was birthed at 256pm, and I noticed the baby had a nuchal cord.  The body followed a minute later, and this little one did acrobatics in utero as the cord was around the neck and around the arms like baby was wearing a back pack.

S helped bring her sweet baby to her chest, and announced to everyone that after four sweet girls, they had their boy!  Shale needed some help to get the right idea about breathing so I helped him with some puffs and homeopathics and he was soon looking around and crying.

Welcome to the world Shale, born earthside on November 16, 2016 at 257pm, weighing in at 6lb 12oz, 19.5 inches long.  Your mama calculated that it took longer to bring you earthside that your four sisters combined.  It was an honor to get to support this sweet family for a second time.  Repeat clients hold a special place in my heart.  <3