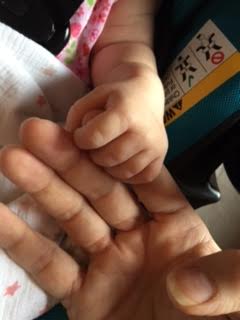 K started care with us at the end of the second trimester of her first pregnancy.  She was currently under care with an OBGYN that she didn’t feel was supportive of her wishes.  K knew my apprentice Rowan, and decided to start care with us.

K was fantastic at taking any advice and guidance we had.  We talked about taking childbirth classes, and she signed up that day.  She hired a doula within days of us suggesting it.  She began chiropractic care.  She was doing everything she needed to make for the most ideal birth experience.

K sent a text to the birth team at 8am on May 15th letting everyone know her water had broken at 430am.  She wasn’t feeling much activity yet.  K was going to shower and eat breakfast, then come by around noon for vitals, an exam, and some herbs to get contractions to start.

K arrived with her friend a little after 12.  Vitals were great.  K was feeling very mild contractions coming every 8 minutes, lasting 30 seconds long.  K was 3cm dilated, 70% effaced, and baby was at a -1 station.  I swept her membranes, which felt intense to K.  Cervix felt stretchy after the sweep.  K drank the labor tea blend, while we talked about a game plan for once she left.  We discussed eating a good lunch and then going for a vigorous walk.

K’s doula came over about 630pm that night to help do some positions to get contractions to come more frequent and stronger.

A little before midnight, K’s doula sent us a text and asked Rowan and I to come.  We both arrived right around 1245am.  We found K laboring in her living room.  All vitals were fantastic.  I did an exam at 115am, and found K to be 5cm dilated, 100% effaced, and baby at a -1 station.  Contractions were coming every 4 minutes, lasting 75 seconds, and felt moderate in intensity.

K wanted to rest at 230am.  We got her in the bed on her left side, encouraging her to rest in between contractions.

K was up a little after 3am.  She labored on the birth ball for a few minutes, before moving to hands and knees on the couch.  She was feeling uncomfortable, and felt like hands and knees with hip movement provided some relief.  Contractions were coming every 5 minutes, lasting 120 seconds.

K alternated positions in her living room over the next couple of hours, doing what felt good to help bring her baby down.  In hands and knees, she was starting to feel a small amount of pressure at the peaks of contractions.

K was working so hard.  She was in tune with her baby.  As 5am neared, K spoke so sweetly to her baby.  “This hurts.  Taylor come out.  Mommy can’t do this much more.”

The birth pool was ready a little after 6am,  and so was K!  She readily got into the birth pool, and sat in the warm water.  She felt the water felt good, and helped take the edge off.  Contractions were coming every 5 minutes, lasting 90 seconds, and they felt strong.

Rowan did another round of lift and tuck with K during the 7am hour while K labored in the birth pool.  It brought the intensity up another notch, helping us get closer to the goal.

K got out of the pool quarter to 9am.  She decided she wanted a check, and then we recommended a position change.  K was 8-9cm, 100% effaced, and baby at a +1 station.  K was making perfect progress.

Rowan and I talked to K about trying the open knee chest position for 40 minutes to help baby’s position and get us closer to pushing.  K was such a trooper, and agreed to try the position.  A couple birth team members stayed at her side to encourage her.  Contractions were coming every 5-6 minutes, lasting 120 seconds in this position.

K stuck with it, but was definitely ready for the birth pool when the 40 minutes was over.  K got back into the birth pool at 930am, laboring on her knees.

K tried laboring in a semi reclining position in the pool.  Contractions began to space to every 8 minutes.  However, K began stating that she was feeling so much pressure.  I did an exam a little before 11am, and found K had just an anterior lip.  K decided to try one contraction with me holding the lip back, but the pressure was too intense and she decided she would rather breathe through contractions a little bit longer.

K got out of the pool at 1122am, instinctively feeling that she needed to labor in the open knee chest position.  We helped her get into this position in her bed.

I checked K at 1215pm.  She still had an anterior lip.  She agreed that she wanted me to try and hold the lip.

Then, such a big lesson on how the mind is powerful happened.  Contractions stopped.  K had a history of trauma, and her body just shut down.  We tried using homeopathy and essential oils, and nothing.

K tried changing her position to bring on a contraction, and nothing.  We encouraged K that she was safe, and it was safe to have her baby.  At 1250, I recommended K speak to her therapist to see if that would help.  After a call over speaker, K decided she needed to have this baby in the hospital.

We all helped K get things together to go to the hospital.  Rowan and her doula went to the hospital with her.  K received great care with nurses and the OBGYN, and finally got to meet sweet Taylor a few hours later!

Welcome to the world Taylor, born earthside on May 16, 2017, weighing in at 8lbs 15ozs.  K was so strong through her intense labor journey, and brave to know when it became too much and making those tough decisions that were best for her and Taylor for Taylor’s birthing time.  It was an honor to work with this sweet mama.  #sacredjourneymidwifery