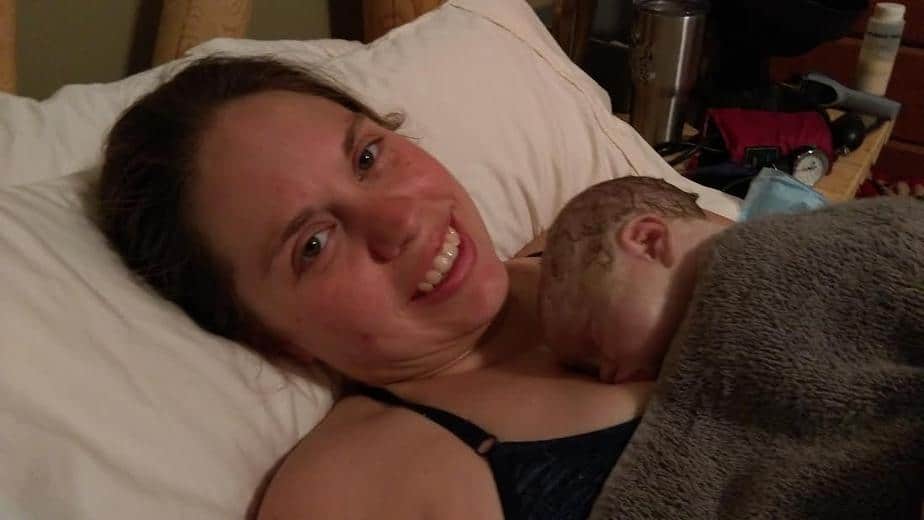 C and J started care with me in the first trimester of their fifth pregnancy.  This was C’s third baby born at him with me.  You can read about her previous birth experiences here and here.

C contacted me soon after she had a positive test, and we were both sad to discover that C’s due date fell smack dab in the middle of my already booked vacation.  We talked, and decided C would do her care with me, and another midwife would attend a few appointments and attend her birth while I was gone… or so we thought!

At her 38 week appointment, C decided maybe I should do a membrane sweep and see what happens.  The baby had a couple small issues that C was deliberating whether it would be nicer to control the process and have the baby in the middle of the week where he could get in with pediatrician sooner.  I was also leaving in five days, and neither of us deep down wanted to miss this journey.  We have been through two other journeys together!

C was 1-2cm dilated, 50% effaced, and baby was at a -4 station.  I swept her membranes and she opened to 2-3cm.  I told C if she wanted to try to further encourage, she could always come back that evening or the next day, but it would be unlikely the initial sweep would work.  We discussed that if the body was ready, labor generally begins within 48 hours.

Apparently her body was ready!  Contractions began about an hour after she left the office.  C told me to come after my 5pm client left.  I arrived at her house around 620pm.

I found C laying on her left side in the bed, breathing gently through contractions.  I started to get vitals.  A minute later, C looked at me after a contraction and said, “I just felt a pop but nothing came out.”  We both had a slight internal panic moment.  I couldn’t get heart tones on her side, so she rotated on her back.  When she did, the flood gates opened.  Her water had broke.  We both sighed in relief!  Baby sounded good.  I did an exam and found C to be 4cm dilated, 80% effaced, and baby at a -1 station.  This was at 6:34pm.

Things hit fast and furious.  C was moaning through contractions.  She got into the pool at 6:44pm, laboring on her hands and knees.

Contractions were coming, one on top of the other, only giving C seconds of break in between.  As 7pm neared, C stated the baby was pushing during contractions, and she was having a hard time resisting the urge.  C had asked weeks before that when she felt pushy, she wanted to be checked and any cervical lip to be held back as she didn’t want to be held up longer than necessary from a lip.  I did an exam and found C to be 5-6cm dilated, 80% effaced, and baby at a 0 station.  I encouraged C to blow through contractions and resist the urge to bear down a little longer.

A few minutes later, C rotated her position to semi reclining.  Labor was fast and intense.  She looked at me and said she could not control the urge.  At 7:15pm, she was 6-7cm.  J and I both stayed at C’s side.  I told her it was normal for a precipitous labor to feel out of control.  She was powerful, and had the strength within her to get through the journey.

I gave C Rescue Remedy to help the feelings of panic that were going on within her.  Fast labors are just so hard to get a grasp on.

C was feeling a lot of pressure at 7:29pm, and I found her to be 8cm dilated.  Three minutes later, C was spontaneously pushing.  She had just a cervical lip, that I quickly reduced per her birth plan request.  One minute later, sweet Titus came barreling down the birth canal and into his mama’s waiting arms.

He decided to make it a tad more difficult by presenting with a hand by his head.  Since he came so quickly, he was a little shell shocked and needed me to give him a few puffs to get him going.  After the puffs, he let out a loud cry and made his sweet presence known!

Welcome to the world Titus, born earthside on March 21, 2017 at 7:33pm, weighing in at 7lbs 4ozs, 21″ long.  I am so blessed that this little guy decided he was ready to come before I left on vacation.  Repeats are always special, but “three peats” are their own kind of special.  It was such an honor to help this sweet couple through their third HBA2C.  Proud of this mama for the strength she showed through her very intense, quick birth.