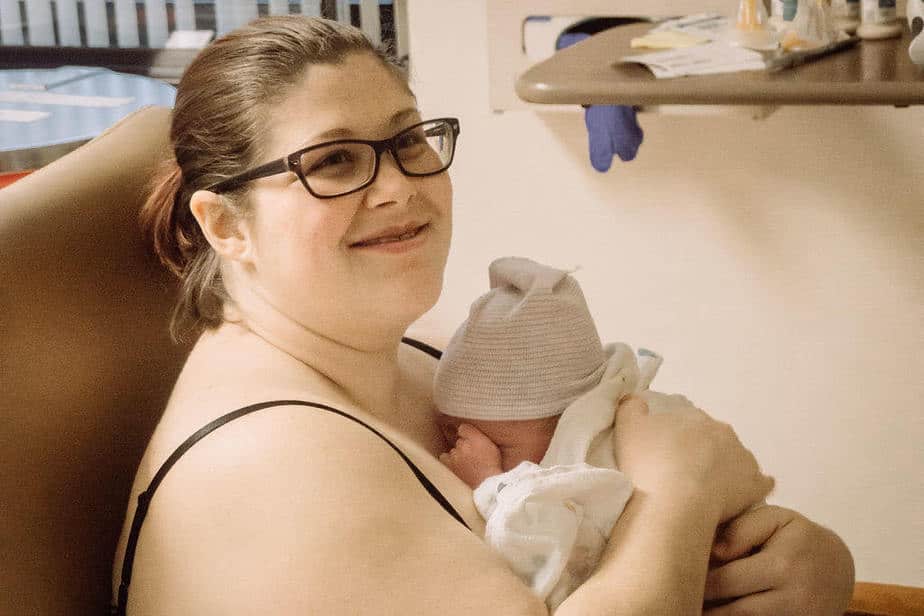 C and J started care with me in the first trimester of their fourth pregnancy.  C had her last baby at home with me.  You can read about that journey here.

C’s pregnancy progressed fairly normal.  Two days before she went into labor, C reached out to me over not feeling well and getting a couple borderline blood pressure readings.  She came in and I took her blood pressure, and found it to be normal.  I did a cervical exam and found her to be 1cm dilated, 60% effaced, and baby at a -4 station.  C had an ultrasound scheduled for the next day, and we agreed to keep her regular scheduled appointment for in two days with me.

At 123am on September 21st, one week before her due date, C’s water broke.  She called and talked to me about the blood tinged fluid.  She said baby was moving normal, and she was having some cramping.  I told her I would come that way, as I wanted to check in on baby with the bloody water she was describing.

I arrived, as did my senior apprentice, at 210am, finding C laboring standing, contractions coming every 1.5-2 minutes, lasting 50 seconds long.  It was clear her body was getting the memo that it was time to have a baby.

Mom and baby’s vitals looked great.  I did a cervical exam at 220am, and found her to be 4cm dilated, 100% effaced, and baby at a -1 station.  I assessed the fluid, and found it to be something to watch closely.  Everything seemed perfect, and C was not presenting any worrisome signs.  So we set to assess heart tones every 10-15 minutes while C swayed through her labor waves.

Things moved very quickly from this point. C’s doula and birth photographer filtered in before 3am.  C continued to move around her bedroom, leaning on to J for some contractions, but she was very much doing her thing and coping beautifully.

My birth assistant and junior apprentice arrived after 3am.  It is a story worth remarking.  I was telling them my van was unlocked and for someone to grab the pool bag (this is my bag of supplies used to clean the birth pool after delivery), but my phone kept autocorrecting to pool “vag” every time I would correct.  It definitely gave some laughter.

C moved to the toilet at 325am to try to empty her bladder per my recommendation, but it caused a lot of discomfort, and C found herself soon moving to standing in the bathroom.

C continued to move around her bedroom.  I heard a contraction that was clearly pushy, and went into the room to look at her.  C was next to her bed, and with the next contraction began to spontaneously push at 349am.  The birth pool was no where near ready, so it was clear a water birth was not happening this time.

I heard some decelerations with heart tones, and encouraged C to push with all her strength.  She birthed the head at 353am into my senior apprentice’s hands, followed by the rest of her baby a minute later.  I helped my apprentice bringing the baby up to C’s arms.  Since C was standing at her bed side, we helped C get into her bed and then jumped into initial assessments.

It was quickly apparent to me that little Zeke was not doing okay transitioning to earth side.  I began to

work on him after getting his vitals by stimulating, suctioning, and then bagging.  A birth team member initiated 911, while I worked on keeping his heart rate up.  After a couple minutes of working on him, I got some very labored respirations out of him.  I continued working on him until EMS arrived to take him to the hospital.  Zeke was admitted for Respiratory Distress Syndrome, but was able to come home two days later.

I finished C’s postpartum care at home, before taking her up to the hospital to be with her baby.  She got to breastfeed him soon after arrival, and he breastfed like a champ!

Welcome to the world Ezekiel (Zeke), born earthside on September 21st, 2018 at 354am, weighing in at 7lbs 11ozs.  It was such a joy to help this sweet couple welcome their fourth boy into the world!  #sacredjourneymidwifery