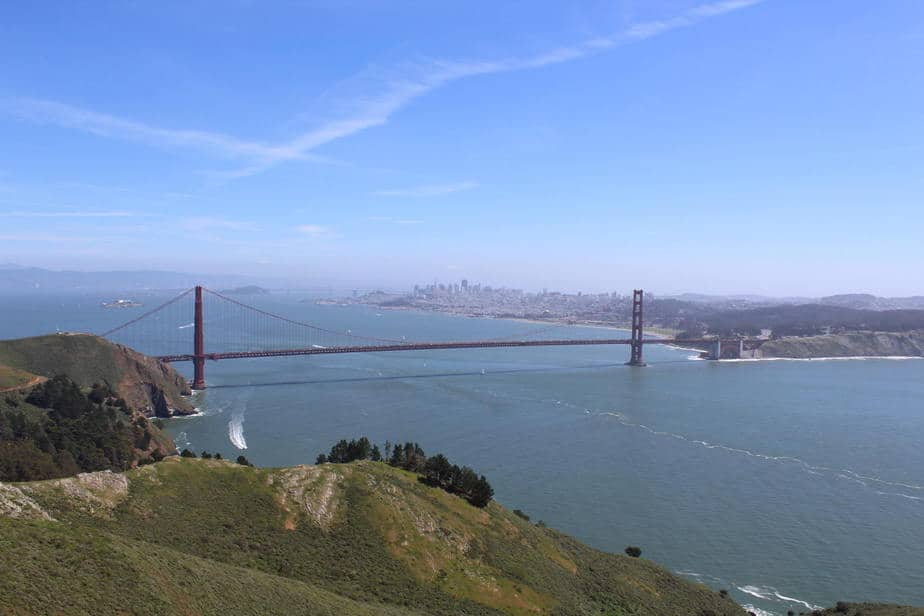 Facebook0Tweet0Pin0
The last leg of our trip was driving north to San Francisco.  San Francisco was by far my favorite part of the trip.  There was so much to see and I fell in love with the city.

The views were stunning!

On March 23rd, we loaded up in Los Angeles and headed to San Francisco.  We decided not to do the coastal road since it would double our trip time and thought that the inland drive would be boring.  We were surprised by how gorgeous the drive was.  The hills and natural beauty reminded us of Scotland.

Tight quarters on our drive.

Due to some issues with the rental car company, we were given a car that was smaller than anticipated.  It made for a tight set up during the duration of our trip, but particularly during our big drive to San Francisco.  The boys were troopers during the drive though!

The view of Alcatraz from the boat.

The next morning we walked to this cafe near the pier and had breakfast.  Breakfast was amazing and it was lovely sipping on coffee on the patio of a cafe in the cool morning.  We had tickets for the tour at Alcatraz at 9:10am, and headed to get in line from breakfast.

Starting to walk up the hills to get to Alcatraz.

Everyone of us loved Alcatraz.  The history behind the famous island was great.  Gideon, in particular, really loved it. Upon arrival, the park ranger gives you a brief history and some

Photo taken right outside the prison.

rules of the land.  Alcatraz is actually a national park now and they do a lot to take care of the area.  They had books that could be purchased for children to do to learn more about Alcatraz.  If they finished the books, a park ranger would stamp the book and give children junior park ranger badges.

One of the prison cells.

From there you entered a building that showed a short film going over the history of Alcatraz, and then the walk began to get to Alcatraz.

It was four decent sized hills that took you to the entrance of Alcatraz where they gave everyone an audio set for a tour through the prison.

Gideon learned a lot from the tour. There is definitely a chill in the air while there and it gives you a sense how it felt to be calling Alcatraz home.

Working on their park books.

We got to see prison stalls set up just as they would have been during the time it housed prisoners.  We got to see areas where there had been damage from one of the famous escape attempts.

The tour was very interesting and informative.  At the end, the boys finished their Alcatraz booklets and got to be sworn in as junior park rangers of Alcatraz.

We spent several hours at Alcatraz and by time we left we were all ready for lunch.

We wanted to check out Pier 39 and see the sea lions while we were close.

They were definitely smelly but the boys enjoyed watching them play around and make a bunch of noise!  We took a few minutes to watch and take a few pictures before walking towards Chinatown and sit for some much needed lunch.

Some of the decor in Chinatown.

After eating some lunch, we made our way to Chinatown.  San Francisco’s Chinatown is known as the largest in the United States so we were looking forward to the experience.  There was lots of ornate buildings, paintings and decorations as we made our way through Chinatown.

The boys wanted a souvenir from their time there and enjoyed looking at all the trinkets in the stores.

According to my fit bit, we walked about 20,000 steps that day and were pretty wiped.  After eating some dinner we called it a night in preparation for the sites of the next day.

For our final day in San Francisco, we had a couple exciting things on the schedule.  We had all wanted to see the famous redwood trees and were excited to arrive at Muirwoods National Forest close to opening time.

The trees are indescribably tall.

We are glad we did as parking was slightly difficult to find.  We discovered when we left that some people were having to park a mile or two a way to be able to go to the forest, so we were very thankful that we ventured out early!

Gideon asked us to take this photo of him reading the map. It is one of my favorites.

Silas enjoying the hike through Muirwoods.

It was definitely chilly that morning and made for some beautiful weather for walking and hiking through the Muirwoods.  It was stunning to just stand there and be surrounded by trees that are hundreds of years old.

Look at those roots!

The boys were in animated moods this day. They are pretending they are holding up the tree.

There just aren’t words for the beauty and awe we felt.

After our time at Muirwoods we were ready for some lunch and found this awesome burger joint that used grass fed beef and made everything from french fries to mayonnaise on site.  It was amazing!

Family photo in front of the Golden Gate Bridge.

After lunch we headed for all the top scenic places for the best views of the Golden Gate Bridge.  Gideon had gotten several books at the library on bridges and learned a lot about the Golden Gate Bridge in preparation for our trip.  The views around San Francisco are amazing.  I can’t say it enough.  We found several nice places to stop and take in the views and capture a few pictures.

Gideon was so amazed by this bridge.  After all the reading her had done, it was so fun for him to see it in person.  He took several pictures and asked me to take his photo several times in front of the Golden Gate Bridge.

I have always wanted to walk across the entire Golden Gate Bridge.  It was definitely on my travel bucket list.

It took some figuring out, but Christopher figured out a way to drop me and Gideon off so we could walk across the bridge.  It ended up being 3.5 miles all together of walking but it was so worth it.

The bridge, up close and personal.

It was amazing taking in the sites from the bridge and see the bridge up close and personal.  The bridge was very busy with walkers and bike riders, the bike riders who come dangerously close into the walker lane.

Gideon was so proud of himself for walking the whole bridge that he had to get a few souvenirs to commemorate the moment!  It was an amazing experience and I am happy that we got to experience that together!

We headed back to our hotel to get some packing done before venturing out to dinner.  The next morning we headed to the airport to begin our journey back home.