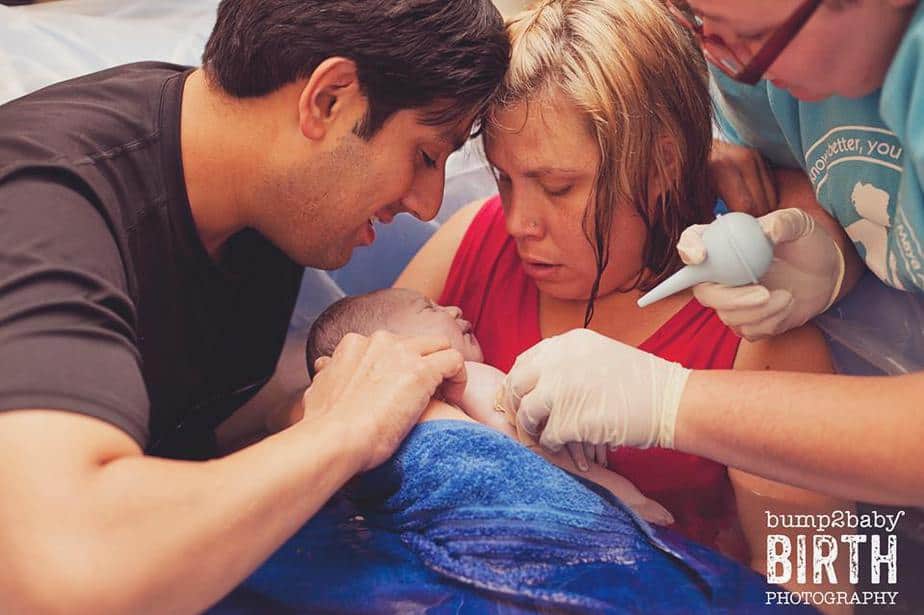 The Birth of Isa

K and O transferred care to me at 22 weeks gestation.  This was their 4th baby.  K previously had all hospital births with an epidural.  They decided they wanted to do something different for this birth. K was in touch with me two days after her due date about regular contractions (10-12 minutes) apart that were getting more painful with evidence she was losing her mucus plug.  That evening she asked me to come over and see where she was at and to sweep her membranes.  I found K to be 3cm dilated, 80% effaced and baby engaged at a 0 station.  This was great change from her prenatal appointment two days earlier.  Her contractions were 6 minutes apart when I was ready to leave.  We discussed labor stages and things K could do to get contractions to come closer and stronger. I didn’t hear from K all night which surprised me.  I heard from her mid morning and she decided she wanted me to come check in on her.  She was just coming back in from curb walking when I arrived.  Even though contractions had spaced out to 10 minutes apart again, it was obvious the contractions had been working.  Cervical exam found her to be 4-5/90/0, bulgy bag of water and a great amount of bloody show on glove.  I talked with K and O about getting out of the house.  That a fresh scenery can help get labor moving.  They decided they would go have some lunch and pick up a birthday cake as it was their three year old’s birthday as well. At 2pm the contractions changed.  They started coming every 4 minutes.  By 3:30, O stated that K was ready for me to come. When I arrived, it was clear that we were now ready to have a baby.  K was bouncing on the birth ball.  Still initially chatty, but when a surge would come on, she would quiet down and focus. K walked the stairs, walked around the house, had her husband do hip squeezes as we got the birth pool ready for her to get in.  A little after 6pm she decided it was time to get in the pool.  She got in hands and knees position, and her doula poured water over her back. Not much later, O got in the tub with K.  They got in their rhythm.  We sat back as they labored together.  Interrupting their time every few minutes to listen to the baby. Quarter to eight K began pushing spontaneously with contractions.  8 minutes later her water broke.  For K, this was a first that her water broke during pushing.  She was used to it breaking during the active labor phased.  Two minutes later, we could see the head as she pushed.  Three more minutes and she pushed sweet baby Isa out into his daddy’s waiting hands. Baby Isa was brought to K’s chest and they breathed in the sweetness of their precious new baby who was going to share his big sister’s birthday. Welcome to the world baby Isa.  Born on September 20, 2013 at 8:00pm.  Weighing in at 8.12#, 19.5″ long.  It was an honor to help welcome you into the world, sweet boy. Here is a video slide show of Isa’s home birth. http://www.youtube.com/watch?v=nZjPczaLOes&feature=player_embedded