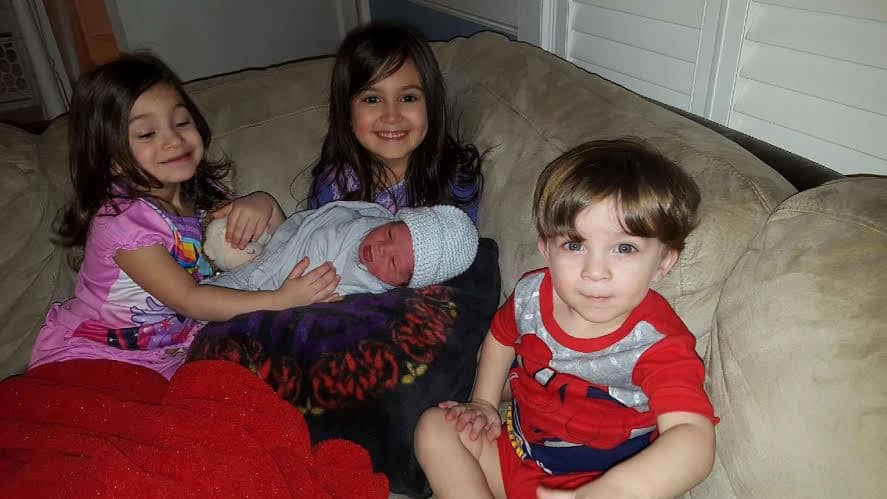 The Birth Story of Zaiden

J and D interviewed me during their second trimester of their first pregnancy.  They at first decided they could not afford a home birth, but further decided they would make it work and began care with me at 23 weeks along. At one day past 37 weeks, J texts me around 9:15 in the morning stating her water had broken.  She had some regular contractions the night before that fizzled out.  Since J had elevated fluid, I went over fairly soon to check on mom and baby. I arrived a little after 11.  A cervical exam found J to be 3cm dilated, 60% effaced and baby at a -3 station.  Contractions seemed to be coming every 5 minutes, but were mild.  I discussed with J beginning the caullophyllum homeopathic, two pellets every hour, until contractions were active, taking a shower, going for a walk and then nap if she could. I left and took a nap, waiting for their call. I arrived back at J’s house right before 3pm by the request of D.  Contractions were definitely active, coming every 3 minutes, lasting over a minute.  J was resting on her left side in her bed.  I sat in the other room, letting J and D rest and labor on. A little after 4pm, I did a cervical assessment and found J to be 6cm dilated, 100% effaced and baby at a -1 station.  Everyone was excited about the good change that happened in a few hours. C, birth assistant, and I got the birth pool ready, and as 5pm was drawing near, J got into the pool and melted into the water, leaning on her left side.  Contractions were still coming frequently, lasting 70-100 seconds.  Every couple of contractions, we encouraged J to take sips of water to stay hydrated.  D was always at J’s side, helping her labor, rock, breathe through each contraction wave. Close to 6pm, J got out of the birth pool and moved to the toilet to labor for a bit.  I talked with D that we needed to get something into J other than water so that she had the energy for transition and pushing.  D went and made J a smoothie, which she refused to drink from D, but eventually C and I got her to take some sips. J moved to her bed, laying on her left side.  She asked for me to provide counter pressure on her back.  For the next hour, J rested on her bed, moaning with contractions.  D at her side, as I provided counter pressure. As 7pm, drew near, J stated she was starting to feel like she needed to push.  She moved to the shower, and D commented there was a small amount of bloody show on the shower floor.  J soon moved to the birth pool, and requested to be checked.  I found her cervix to be 7cm dilated, completely effaced, and baby at a +1 station.  I talked with J that it wasn’t time to push yet, but baby was significantly lower and that was why she was feeling pressure. Over the next couple hours, J was clearly moving into transition.  Contractions were coming every 2.5 minutes, lasting 90 seconds.  Her instincts were to change position.  She moved from the birth pool, to the toilet, to the shower, to the bed.  As she lay in her bed, C and I did counter pressure, and could see bloody discharge with contractions.  We knew she was getting close. At 9:30pm, J got back into the birth pool and requested to be checked.  I found her to have just an anterior lip and baby at a +2.  J wanted to push, so we discussed pushing with me helping reduce the anterior lip.  J agreed and said it felt better to push. After a bit, J asked if she should be worried about the anterior lip, if that meant something was wrong.  I will never forget the wave of relief that washed over her face when I reassured her it was normal, and that I had cervical lips that I chose to have reduced with both my births. She continually alternated semi reclining and hands and knees while pushing in the birth pool.  Contractions spaced now, coming every 5 minutes, lasting 70 seconds. J rested well between contractions, building back her energy for the next pushing wave. At 10:30, J moved to the shower to breathe through a few contractions, hoping it would help reduce the lip.  Shortly before 11, she moved back to the birth pool, laboring on her hands and knees. At 11:19, J was completely dilated, baby +3, and spontaneously pushing. She reclined back into J, pushing well. 15 minutes passed, and we could see the head on the perineum.  J touched the baby’s head and felt encouraged that the baby was really right there.  The baby’s head began to crown at 11:47.  J did so well letting the head stretch the perineum.  The head was birthed at 11:50, followed by the body at 11:51. Baby was brought to mom’s chest.  After a little suctioning and some oxygen, he began to pink up and breathe well on his own. Welcome to the world sweet Zaiden, born earthside on November 8, 2014 at 11:51pm, weighing in at 7.10#, 18.75 inches long.  His mama worked so hard to bring him earth side.  Blessed and honored to have served this sweet couple in welcoming their first baby.  <3