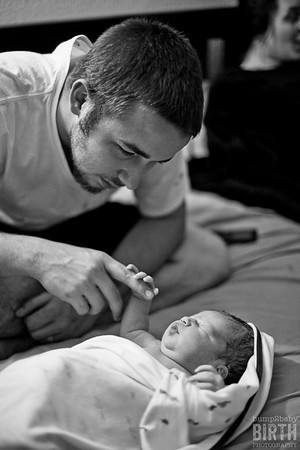 S and D transferred care to me at the start of the third trimester.  S was taking hypnobirthing classes and was really feeling like she wanted to see a midwife and have a home birth.  She had a doula and was taking the steps to making a perfect birth team. It really seemed clear that God had destined for S and I to work together.  At one of our last prenatal appointments, S mentioned that she had recently realized that she had called me at the very beginning of her pregnancy about midwifery services.  Her and D had been living with a family member that was unsupportive of home birth so that is what drew her to the OB route.  It was neat to see how things moved full circle. At her 38 week appointment, S requested a cervical check.  We were surprised to find S to be 3cm dilated, completely effaced and baby engaged at a 0 station.  The check was very gentle, and there was bloody show on the glove.  We reviewed stages of labor and discussed making sure she had everything purchased and ready for her birth.  It seemed like it might not be much longer until labor day. Two days later, S sent me a message asking what things she could try to get labor going.  I encouraged her to enjoy the last days of pregnancy and gave her a few options, such as walking, nipple stimulation, sex. S decided to try some of my ideas, and soon regular contractions began around 330am on Friday, January 17.  S tried to rest through them as she could.  S asked me to come a few hours later and I arrived around 1030am. Watching S, the surges were coming about every 4 minutes, lasting about 45 seconds long.  Did a cervical check and found S to be 5cm dilated.  We did a membrane sweep to encourage stronger contractions.  Baby felt like he was in the LOA position.  Everything was progressing perfectly. The surges got stronger after the membrane sweep.  S sent D to the store to finish purchasing snacks and supplies for birth that they did not get yet.  A little after 11, S’s doula arrived at her home.  We worked together alternating S’s position, chatting and laughing which is always a great oxytocin release.

S alternated from walking, bouncing on the birth ball and sitting on the couch.  She felt nauseated and threw up after a strong surge.  We pulled out the peppermint oil and S said it helped tremendously.  S had to focus during the surges, but other wise the contractions were on the mild side and S enjoyed chatting and laughter in between the surges. Around 1:30pm, S requested a check.  She was now 6cm dilated and baby moved down a little further and was now at a +1 station.  S was encouraged by the progress. The surges seemed to get a little stronger as S had the desire to get in the water.  D had returned and got the hose for the birth pool hooked up.  We began to fill the pool.  While S waited, she stood in the shower to help with the surges.  A little over an hour later, the pool was ready and S got in.

I rarely have a mom who states that she does not like the birth pool.  Most women just melt into the water.  The combination of the warm water plus the buoyancy factor helps make the surges more manageable.  S did not like the pool.  After about 15 minutes of laboring in the birth pool, she decided to get out. S alternated from walking, standing and rocking her hips, and sitting on the birth ball.  At quarter to 4pm, she asked to be checked again.  There was no change, but a bulgy bag of water could definitely be felt. Surges shifted again and were now coming every 3-4 minutes, lasting over a minute long.  S was getting more serious with surges. An hour later, she asked to be checked again.  She said she was feeling pressure in her bottom.  She was 6-7cm, and baby was at a +2 station.  It a very good explanation for the pressure! S felt a little discouraged that she hadn’t made a lot of change.  We discussed all the factors in cervical change.  I began to discuss that if we don’t have any change in a couple hours, we could consider breaking her water as an option to see if it helps.  S felt more encouraged after the conversation. As 6:30 drew near, S asked to be checked again.  There had been no change.  We discussed the risks and benefits of rupturing her membranes.  I reminded S that the surges would be getting much stronger after the rupture.  S and D talked and decided that they wanted to break the water.  I ruptured her membranes with an amniocot and a normal amount of clear fluid came out on the chux pad.  Baby tolerated the release of the water well. The next surge was immediately much more intense.  Surges stayed very strong, coming every 3 minutes, lasting 90 seconds.  We alternated people to be at her side. S’s immediate reaction with surges was aggressive.  One second she would be laying on her side in the bed.  The next she would run and slam herself into her bath tub.  Then she would be out and pounding on the wall.  Then pacing the house.  On the birth ball.  She was very in tune with her body.  She began to get more vocal with contractions.  They became intense.  Her reaction was to cuss.  S laughs now when she hears D say, “You definitely were cussing like a sailor.”  A woman’s reaction and their instinctual ways to cope is always amazing to me.

As 8pm drew near, S was demanding she could not do this.  It hurt too bad.  She could not do this.  She cried to transport.  A recent check found her to be 7cm. I sat with S and discussed what a transport would look like.  That she would have to sit or lay in a car or ambulance.  When she got to the hospital, they would insist she lay in a bed, strapped to monitors.  They would make her sign several documents, take her blood and start an IV.  She would not be able to move as she had been at home.  And the biggest thing for S is that an epidural was not an option due to the fact that she had scoliosis and her previous OB ruled her out as unable to have one. Surges continue to come on top of each other.  S throws on a shirt and runs in and out of her apartment.  As a surge comes on, she yells and runs into her bath tub.  S asks D to call her Mom and Grandma over.  They lived near by, so it was minutes and they appeared in the apartment. S’s demeanor shifted.  She became even more vocal with surges, and began to fall down with surges.  Her Mom and Grandma were standing there ground at supporting her for her home birth, reminding her there was no great pain management option for her in the hospital.  She begged them to call an ambulance.  Her Mom and Grandma encourage her to get checked. At 8:30 pm, she was 7-8cm.  She became quite vocal at her family.  The next surge came and she ran to the couch.  Her Mom and Grandma said they would prefer taking her to the hospital by private car than ambulance.  All the while S is running in and out of the apartment, running into her bath tub.  Whatever her body was screaming for her to do at the time. By 8:40, we had S ready to be out the door.  I told her family I would be 15 minutes behind them as we needed to quickly finish cleaning and packing up our supplies.  The birth pool was already drained, so clean up should be quick. Ten minutes later we are half way cleaned up and the apartment door flies open.  S appears!  We all just stop in our tracks.  She had a blanket in her hands that she ripped to cope with surges.  She ran to the wall and pounded it, helping to get through the next surge.  Soon D appears followed by her Mom and Grandma. As the tale goes, the car was at the gate of the apartment and a surge began.  S felt within her that she could not tolerate the car ride and that she needed to be home.  She flung open the door and jumped out, running barefoot with just a shirt on to her apartment.  Her husband jumped out and chased after her. It was evident to those of us on the birth team, that the attempted transport was a good mental release for S.  She hit that wall where she realized there was nothing left to do but have a baby.  There was no out to help at the hospital. S’s Mom and Grandma pulled me aside and said they were going to go home.  They stated she tends to be less able to cope in general when they are around since she is used to them babying her.  I assured them that I would tell D when to call them back over. S was much able to cope better with surges now.  Her body’s reactions to surges was to literally dive/slam into her bath tub, running hot water as the heat helped with the surges. As 9pm drew near, S yelled, “I feel like I am turtle heading.”  The whole room bursted into laughter, including S.  It sounded like baby was moving on down, giving S increased pressure. Quarter after 9 S asks to be checked, stating she feels like she is pooping.  She was now 9cm!  We all rejoiced with her at the great change. Minutes later, S began squatting beside her bed, grunting with contractions.  We threw the remaining shower curtain on the floor to protect her carpet as she labored.  An obvious surge began where S was pushing uncontrollably.  A check (just 7 minutes later from the first check) found her to be completely dilated and effaced and baby at a +3 station.

^ One of my favorite pictures.  S’s strength was empowering.^

Pushing began.  S pushed squatting on the floor.  After a few pushes, she decided she wanted to push in her bath tub.  We did that for a few pushes, and then moved back to squatting beside the bed.  We began to be able to see a small amount of the head as she pushed. Squatting became tiresome, so I suggested to S that she could move to the bed and push in hands and knees leaning on pillows or lay on her left side.  She was on her left side and continued to push with surges.  At 9:57, the head was out, followed by the baby a minute later.

S was feeling shaky and was worried about bleeding so she asked to please cut the cord and pass the baby to D.  A few minutes after birth, the cord was cut and safely wrapped and held in Dad’s arms. Welcome to the world Brantley Wayne, born earth side on January 17, 2014 at 9:58pm weighing in at 8.2#, 20″ long.  Your mama worked hard to bring you earth side.  <3