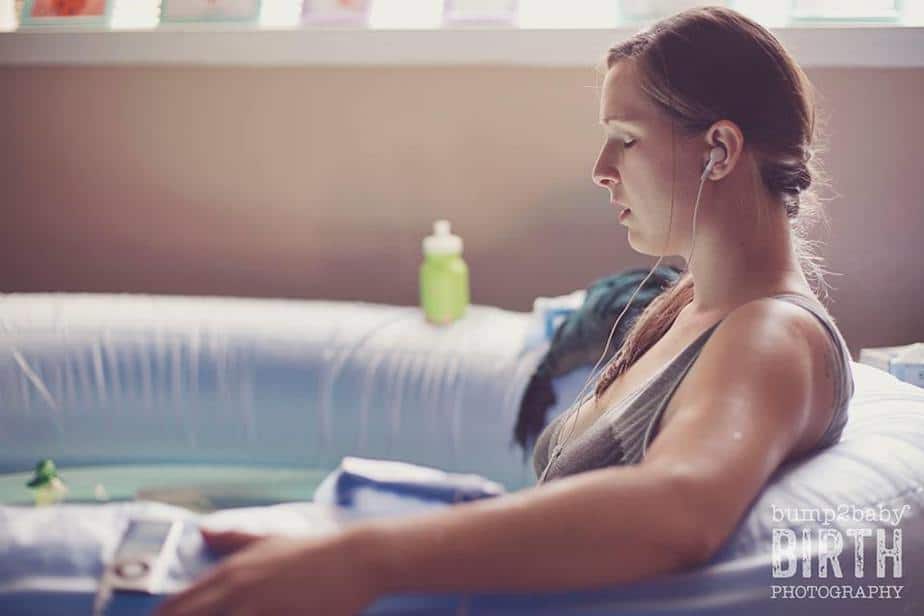 I met R and C for the first time around 25 weeks gestation.  They were making a move to the area and wanted to interview me to be their midwife for their home VBAC.  We connected and R began care with me after they moved the following month at 29 weeks gestation. R had the picture perfect pregnancy, and was a perfect candidate for a VBAC.  At 41 weeks, we did our first cervical check and found R to be 0cm dilated, 80% effaced and baby engaged at a 0 station.    R was encouraged and continued to be optimistic about her body and her baby. R’s hubby C was a bit of a comedian.  R had made multiple birth affirmations that she taped around her room.  One day she woke up to an affirmation from her husband.  “My vagina is huge.”  As we entered close to 41 weeks, he bought R lilies with a note that said when the lillies bloom so will her loins.  <3 On the morning of October 4th, R sent a text that today was the day.  Contractions woke he up at 3:30 in the morning, and were now coming every 5 minutes.  I told her I would start getting things ready and for her to let me know when she would like me to come. I arrived around 10:20 and contractions were coming every 3-5 minutes.  R said they felt noticeably stronger.  We did a cervical exam and found R to be 2-3cm/80%/0 station.  Was able to move the cervix anterior.  We did a membrane sweep to encourage stronger contractions. R was in the labor zone.  She bounced on her birth ball while listening to her ipod.  One song resonated well with R as she labored and kept repeating it over and over.  We stood in awe watching her.  We busied ourselves getting supplies ready as she did her labor dance. A little after 2pm, R was on the toilet and her water broke spontaneously.  Meconium was noted in the fluid.  Baby sounded perfect.  We did a quick cervical check and found R to be 3-4cm/90%/0. Contractions got much harder.  Occasionally R would comment on the sensation she was feeling above her pubic bone. She continued on laboring peacefully. A little after 3 she got into the birthing pool.  She looked so peaceful as she labored.  The sensation that she was feeling was getting more intense.  She described it as a stabbing pain.  I discussed with R and C the risks and benefits and that I felt we should move our laboring into a hospital for the safety of R and baby.  They agreed.  R decided she wanted to go to Ben Taub to continue her labor for a vaginal birth. A couple hours passed and the OB came and spoke with us.  She was now 4cm and doing well.  They did an internal sweep of her incision and did not feel that she was rupturing.  They were going to try to get her into a labor room. Thirty minutes passed and a nurse came looking for C.  C went in and came out to me.  Tears in his eyes.  They were taking R back for a cesarean due to bleeding.  It turns out the placenta was starting to abrupt.  Thank you, Jesus, for guiding our steps and allowing the perfect team to be there to take care of R and her sweet baby. R later told me that she made it to 6cm, which was further than she made it with her first. Sweet baby Harlan was born the evening of October 4th, weighing in at 8.15#.  Both him and his mama did fantastic, and he latched right on to the breast and nursed peacefully when we worked with him. It was such an honor to get to work with this sweet family.  Thank you for inviting me into Harlan’s birthing day.