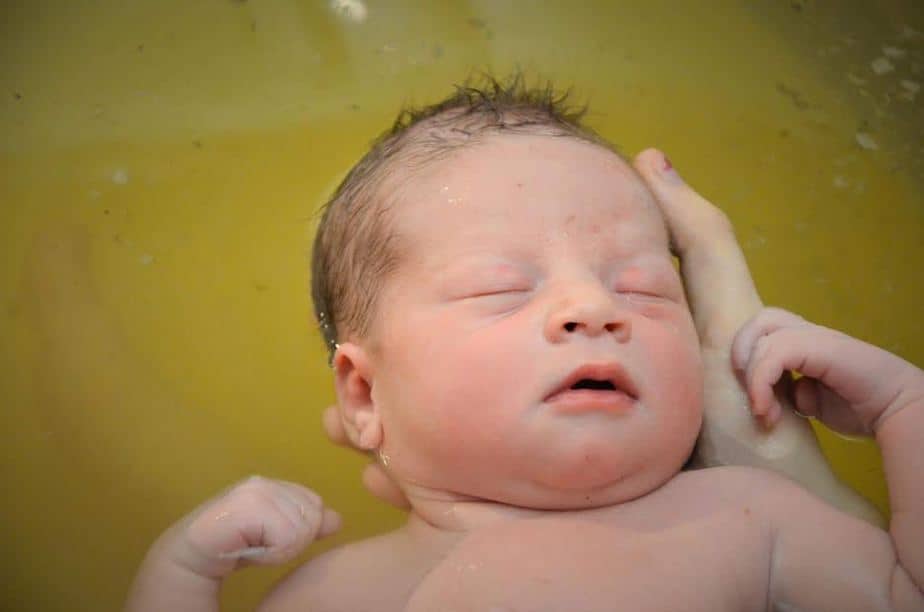 A and D started care with me in the first trimester of their first pregnancy.  A was super excited about having a home birth with her first baby.

A’s pregnancy progressed along normally.  The morning of New Years Day, A sent me a text that she was irregularly leaking some kind of fluid and baby wasn’t moving normal.  I recommended they come to see me.  The baby sounded great on the doppler, with good accelerations heard.  The swab was negative for amniotic fluid, and A was dilated 1cm, 70% effaced and baby was at a -1 station.  They were relieved that all was well with their baby, and planned to see me in two days for their regular scheduled appointment.

However, the following early morning brought a pretty significant storm to the area.  A sent me a text at 745am on January 2nd stating her water had for sure broken at 6am.  Fluid was clear and baby was moving well.  I recommended A eat a good breakfast, and then come see me for an assessment and some herbs to get contractions moving along.  A was GBS positive, which meant we needed to get things moving along sooner than later.

A and D arrived at 11am.  She said she was having infrequent, mild contractions.  All vitals were normal.  A was definitely ruptured.  Baby was in a ROT position.  I made A an herbal tea mix to help get contractions going.  I talked to them about trying lift and tucks when they got home to help baby’s position.  I sent them home with homeopathy, and discussed starting it around 2 if contractions weren’t regular or strong.

It didn’t take long and A’s body started getting the memo.  Around 230pm, I was asked to go ahead and come as contractions were 3 minutes apart and A was moaning through them.

I arrived a little before 4pm and found A laboring in her bed, leaning against D.  The waves seemed intense, as A was moaning and in the zone.  I began to check vitals and prepare for an exam.  I found A to be 3cm dilated, 100% effaced and baby at a -1 station.  Baby was still in a ROT position.  I told A what great progress she had made.  I suggested A get up to empty her bladder soon, and then I would like to try some different positions to get baby to rotate and move down.

I will say from the beginning that A was such a trooper through her labor.  Things were intense, but she did every position I recommended without a complaint.  She was determined to get her little guy out!

A labored on the toilet for a few contractions.  The position change brought on the unfortunate nausea and vomiting the labor brings for some.  We got her an emesis bag put together with some peppermint oil in it to give some relief.

Around 420pm, A was ready for me to do a round of ten lift and tuck with the rebozo.  They hadn’t done them when they got home earlier, and I was certain it would help immensely with baby’s position.  I did the lift and tuck while D provided support to A through the contractions.  The contractions were coming every 2-3 minutes, lasting 45-50 seconds long at this point.

After the lift and tuck, A walked around the room for a few minutes before trying a new position.  I got A positioned in the open knee chest position and talked with her about staying in it for 40 minutes.  Contractions changed during this time, coming every 4 minutes, lasting 60 seconds long.  At 530 when I got A out of the position, she stated she felt like that really helped and her contractions were now much stronger.

A was feeling a little tired, so we helped get her into an exaggerated runners position on her left side.  D got in bed beside her.  I showed her friend who was a new doula had to provide counter pressure, and stopped out of the room to give them some quiet time.

A rested in between contractions for about 50 minutes before being ready to change position again.  D stepped out to eat some dinner.  I suggested A try sitting on the birth ball for a few contractions. I got on my knees and let A give me her weight while her sister in law gave her counter pressure.  In between contractions, someone fed A some bites of fruit.  A had been doing so well hydrating through out the entire labor.

A little after 7pm, A said she wanted to try laying in her bed again.  I helped position her in exaggerated runners on her right side this time.  We could tell baby’s position must have changed, because 15 minutes later, A was on her knees leaning on her birth ball.  She said it was too uncomfortable to lay on the bed any longer.

A was beginning to feel some rectal pressure.  I had my birth assistant start to fill the tub so that A could labor and birth in there if she wished.  It wasn’t long and A was spontaneously grunting at the peaks.  Contractions were coming every 3 minutes, lasting 75 seconds at this point.

I did an exam at 743pm and found A to be 9cm dilated, 100% effaced and baby at a +1 station.  I recommended A blow through contractions until she can’t blow anymore.

She got into her bath tub at 745pm, laboring on her hands and knees.  A began to spontaneously push at 751pm, as the urge was beyond her control.  Right at 8pm, I found A to be 10cm dilated, baby at a +2/3 station.

Then the fun began!  It didn’t take but a few pushes for A to bring the babies head to her perineum.  Baby was starting to have some decels, so we encouraged A to take some cleansing breaths.

I began to play tug of war with A with the rebozo to see if it would help her birth the baby.  At 820pm, we started giving A a homeopathic to help her with oxygenation.  It did wonders, and after a few minutes, baby’s heart rate was normalizing.

A now had the baby’s head crowning, but he couldn’t seem to make it passed the perineum.  We tried squatting, we tried standing.  I tried to vigorously massage and stretch while A pushed to see if the head would come.  At 835pm, I discussed with A and D that I felt an episiotomy may be necessary at this point and I would like to move to the bed to be in a better position to help.

A and D agreed.  D helped A out of the tub.  She spontaneously squatted at the side of the tub through a contraction, before slowly making her way to her bed, her sweet boy’s head bulging out her perineum.

A got into semi reclining in the bed at 842pm.  I discussed the procedure with A and D before beginning to numb with a topical medication at 850pm.  The episiotomy was complete at 855pm, and A began to do tug of war with my birth assistant to help finish getting this guy out!  It did the trick, and at 857pm, Ozzy was here!

I told A she has quite the “perineum of steel” as even with doing the repair for the episiotomy had its own struggles.  Her perineum was so strong the needle struggled getting through the tissue!

It was such a joy to get to be part of this sweet family’s journey into becoming a family of three.  <3