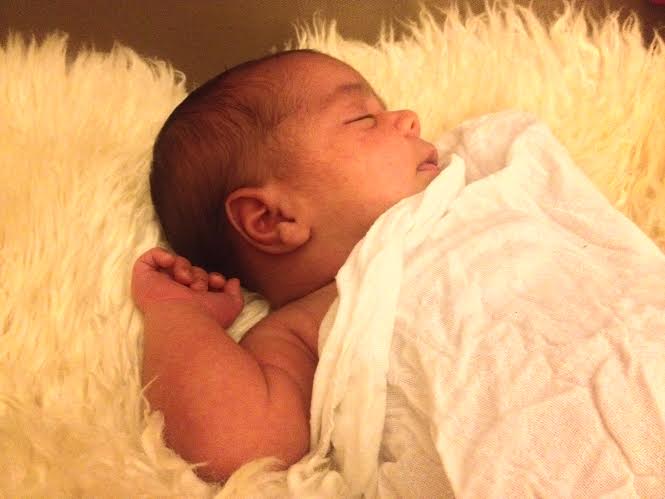 N began care with me in the third trimester.  She was unhappy with her current provider and decided to make the plunge for the home birth she wanted. At 40.3 weeks, N sent me a text around 8:30 saying “I think today is the day.”  Contractions were coming about every 10 minutes, lasting 30-60 seconds.  I encouraged her to get up and eat some breakfast and go for a walk and see if it brought her contractions closer together. An hour later, N text that they were 3.5 minutes apart, and a minute long.  They stayed that way for an hour and I headed out to join N. I arrived a little after 11:30 and found N laying on her left side on her bed.  Contractions were coming every 4 minutes, lasting 90 seconds, and seemed very hard.  I did a cervical check a couple moments later and found N to be completely dilated and effaced and baby to be at a +1 station.  Her membranes were most definitely intact and were bulgy. I told N if she felt pushy, she could definitely give some pushes.  Due to some glitches, the birth pool was not filled yet.  N’s bath tub was cleaned and filled quickly.  N got into the warm bath shortly after. N alternated squatting and semi reclining, occasionally giving a push.  She said she wasn’t feeling very pushy yet, and I told her it was okay to rest and wait a bit for the urge. Close to 1pm, N decided she wanted to get out of the birth pool and lay in the bed.  She rested well for about thirty minutes. At that point, it had been two hours of N being complete and she was ready to have a baby.  We discussed options, and N decided she would like me to rupture her membranes.  With her water bag gone, she felt pushy almost right away. With the water gone, I could feel that baby was coming down acynclitic and putting a lot of pressure on her pubic bone.  I encourage N to move into a semi reclining position to help baby’s head move under the pubic bone. A couple minutes after two, I did a check and found that N had a small cervical lip.  I discussed with her holding it back during the contraction, and she agreed.  The lip quickly reduced and baby was at a +3 station.  Sweet baby Rose followed just two minutes later and was placed immediately on her mama’s chest.  Wasn’t too long after birth and Rosa latched to the breast, and did not want to give it up! Welcome to the world sweet Rosa!  Born on July 13, 2014 at 2:09pm, weighing in at 7.14#, 18″ long.  Her mama was amazing through her labor and birth.  <3