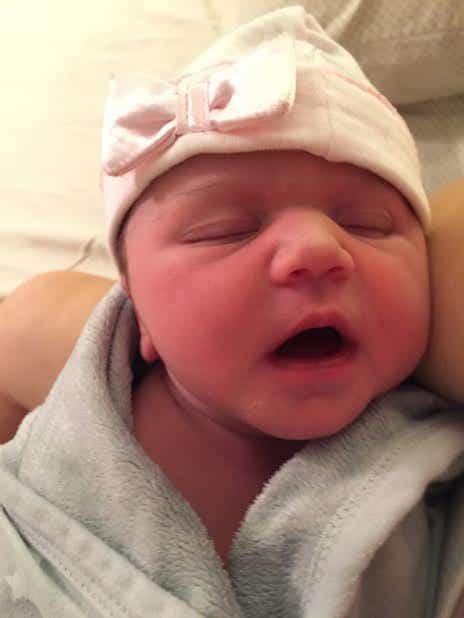 T and H started care with me in the first trimester of their second pregnancy.  They had birthed their first child at a birth center, and were looking forward to staying home for this little one’s journey.

At her 39.0 weekly appointment, T was talking about how she really hoped she would go into labor before her due date, and really hoped the labor journey went quick, but knew it was too much to ask.  Little did T know the journey in store for her!

The following day, June 3rd, H sent me a text a few minutes passed 12pm saying that T was feeling some irregular contractions, but felt confident that this was the start of labor and thought maybe I might want to take a nap.

H sent me a text at 1:31pm saying he thought T’s water broke but wasn’t sure.  He sent a picture, and I could confirm her water was definitely broke.  While en route, H sent me a  contraction timer that showed contractions coming every 2 minutes, lasting 50-60 seconds.

I got out of the house quickly, and started reaching my birth assistant and apprentices as no one even knew that anyone was labory.  Thankfully two out of three were able to quickly get out of their house and head that way.

I arrived at 226pm, and found T laboring backwards on the toilet.  The primal low moans told me baby wasn’t far away.  T’s mom helped me quickly get the bed made so that it would be ready for postpartum.

T said she was feeling a lot of pressure in her butt.  Baby was also showing that she was close to birthing, as she was having some slight decels at the beginning of contractions.

T really wanted to have a water birth like she did with her first, but there was no time for the birth pool.  She got into her bath tub on her hands and knees and labored.

My apprentice R and assistant H arrived around 240pm, and quickly finished getting things set up for delivery.  I began dosing T with a homeopathic to give more oxygen to the baby.

T began to push at 245pm.  I suggested she move into semi reclining and do tug of war with the rebozo with H to help get baby under the pubic bone.

T moved to squatting as she pushed at 255pm.  I suggested to T that she needs to deliver out of the tub, as the bath wasn’t holding water well and I felt baby would be born more quickly if T was more comfortable.

T agreed and moved to her room.  We threw down a shower curtain in the middle of her floor and T moved into hands and knees at 258pm. The next push brought the baby to crowning.  T did not wait.  As soon as baby was crowning, she continued to push and birthed her sweet baby into H’s waiting hands.  She was here!

Welcome to the world Brooke, born earthside on June 3rd, 2017 at 3:00pm, weighing in at 7lbs 8ozs, 19.25″ inches long.  T has been shopping at Hobby Lobby that morning feeling cramping, and was holding a baby when her toddler was waking from nap time.  Such an honor to support this sweet couple on their quick, peaceful home birth. #sacredjournerymidwifery