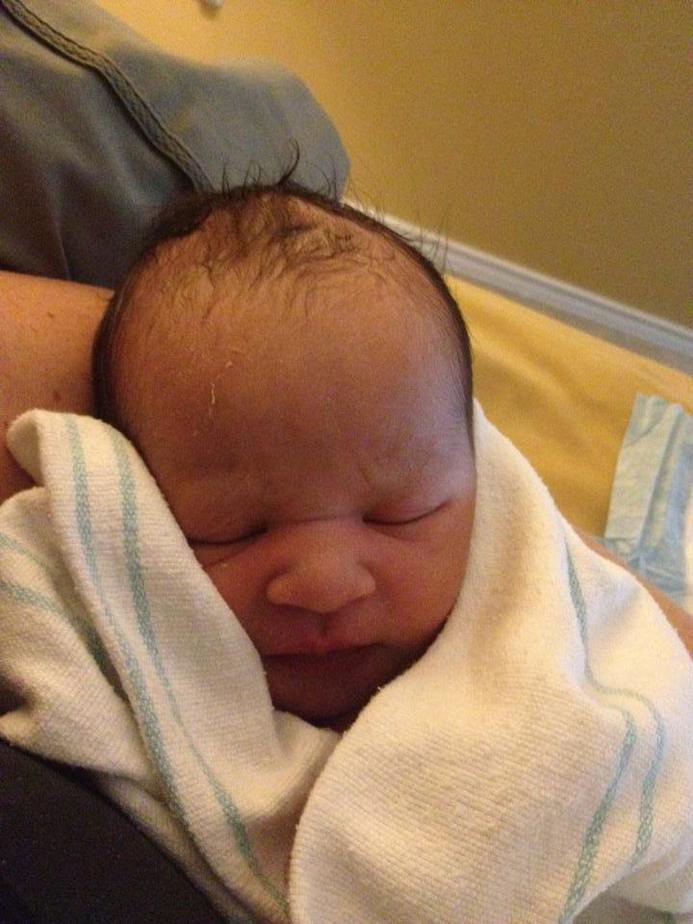 M and J transferred care to me at 34 weeks along in their pregnancy of their second child.  M wanted a different birth experience for this baby and decided a home water birth is what felt right this time. M came to a birth stories night event I held the beginning of September.  She told everyone that her and God had a deal.  She was going to begin her labor on the evening of September 19th and deliver on the 20th. The 19th and 20th passed, and M was still pregnant.  🙂 The evening of the 26th, M text me that she was having some contractions and she was confident that this was the early start to labor.  We joked about M having the right days of the week to start her labor, just the wrong dates.  We talked about contractions and when to call me, and I encouraged M to rest while she can until her body was ready to work. At 0415 in the morning of the 27th, M called and asked if I would come do an exam.  She was contracting every 5 minutes and felt like the contractions were changing.  We live very close to each other so I got dressed and was at her house about ten minutes later.  By observation, contractions seemed to be 5-7 minutes apart, lasting 20 seconds.  M stated they definitely slowed again since she got out of the shower.  Cervical exam found her to be 3cm dilated, 80% effaced, and baby engaged at a 0 station.  Baby was acynclitic and in the right occiput anterior position.  I encouraged M to sleep if she could, and that when she woke, she should go out and curb walk to jiggle baby’s head. I had a training that morning in Katy, so I stopped by M’s house on the way to see how things were and make a decision if I should go to my training or not.  Contractions had picked up and a cervical exam found her to be 4cm.  M and J told me to go to my training and they will call me back when they were ready.  I encouraged M to go get some breakfast or pick up a birthday cake for the baby.  Scenery change is usually helpful in the labor journey.  They liked the ideas, and I left for training and they prepared to go get some breakfast at Denny’s. At 11:15, I received a text that said contractions were every 4-5 minutes, and much harder.  After assessing how strong things were, we decided it was time for me to join them.  I left training and headed back to M. I arrived at noon to find M in the birthing pool, moaning low with each surge.  She had her hypnobabies tracks going and was in the laboring zone.  After two contractions, I soon realized that we were much further along than expected and went outside to gather my birth supplies and call my birth assistant to come. I quickly began to sort out birth supplies as M’s surges were on top of each other.  M’s membranes ruptured spontaneously at 1215 and soon M began to feel pushy. At 1231, M was 10/100/+3 and pushing spontaneously.  During the next surge, M yelled “Shannon, come and put pressure on my perineum.” I applied counter pressure to her perineum as the head started to crown.  Sweet Elodie came earth side into her mom and dad’s waiting arms at 12:34pm. Such a sweet, gentle birth.  The hypnobabies home program M did helped immensely.  She didn’t realize things were as far as they were because she was so in the zone.  She was incredible. Welcome to the world Elodie!  Weighing in at 6.15#, 19.25″ long and welcome by her mom and dad and sweet big brother.  So honored to have been part of your birthing journey!