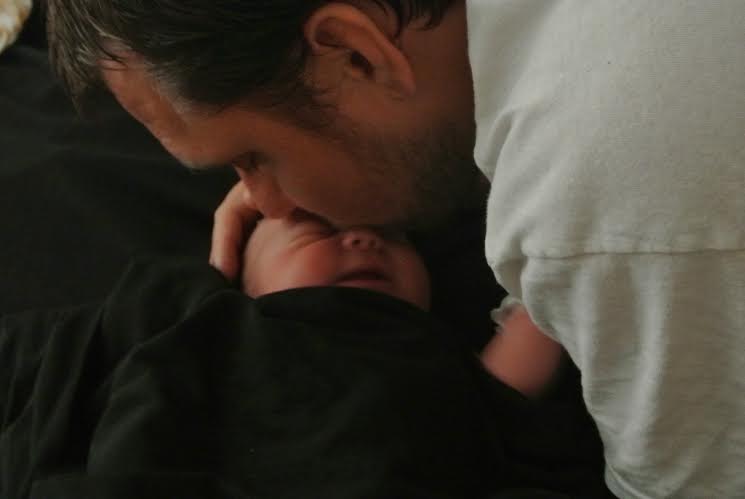 A and H began care with me at 17 weeks along in their first pregnancy.  A had researched for quite awhile the birth she wanted, and she knew she wanted a home, water birth. Two days before A’s due date, she called me that afternoon letting me know that she had been having very regular contractions all day, about 3-5 minutes, lasting a minute long.  I was about to finish at a home check up, and told A I would stop in on my way back and check on her. Cervical check that early evening showed A to be 5cm dilated, 100% effaced and baby low at a +1 station.  I felt that baby was acynclitic and discussed with A to curb walk some to move baby’s head around.  Contractions seemed regular, but very mild.  A and H were going to run to the store.  I encouraged rest while she could, and to keep in touch with me. Contractions spaced some that evening, allowing A a good night of rest.  After waking the next morning and moving around, contractions began again, coming every 3 minutes, lasting 30 seconds long.  A text that she was going to eat, walk the mall and come over for a check. A and H arrived at my house a little before 1pm on Sunday afternoon for a check and membrane sweep to see if it would help active labor begin.  Cervical check was the same, but contractions began to pick up almost right away.  Not even an hour after leaving my house, A text that contractions were way more intense, coming every 2-3 minutes, lasting a minute long. A little after 2pm, A said the intensity was high and she would like me to come over. I arrived a little before 3pm, and heard the moans of a hard working mama.  Contractions were definitely frequent, and strong.  H was holding onto A through the contraction, helping squeeze her hips and rub her back. Just before 4pm, A asked to be checked.  She was 6cm now.  Baby still low at a +1 station.  The birth team finished getting the birth pool ready, and A readily got in. She labored well, getting in a squat like position during surges, holding on to H, and leaning back into the tub to rest during the breaks.  As 6pm drew near, A stated she was feeling some pushy pressure, and decided to get out of the tub for a bit.  I talked to A about trying to do what I call the “wild captain morgan.”  It is a side lunge, with exaggerated hip circles.  She tried that for a few minutes, before moving to her birth ball, to then moving to hands and knees. Quarter until seven that evening, I did another cervical check.  A was 7cm dilated, 90% effaced and baby was at a +2 station.  A was tired, and we talked about her and H laying in bed to rest, being sure to alternate sides every 15-30 minutes to help with baby’s head to rotate. A had the sweetest family members present for her birth, whose support was phenomenal.  A’s mother feverishly kept notes of every little thing that happened during the labor and birth.  Literally, a play by play of everything, that everyone was doing.  It will be a sweet, humorous, fun memory for all from labor day. A rested well.  Around 830pm, the pressure was increasing and A got back into the birth pool.  Contractions had spaced a little, coming about every 5 minutes, lasting 90 seconds, but still strong in intensity.  Close to 10pm, A stated it felt better to push.  I did a check a little after 10pm, and A was now 8-9cm dilated.  I talked to her about not pushing yet, and trying to breathe through the surges.

For the next couple hours, A labored on, resting well in between contractions.  As midnight drew near, A commented that she felt like her body was trying to bear down again.  A decided to get out the tub, and to try to rest in the bed again. Bloody show was appearing now.  As she rested, the shakes of transition came on. As she rested, we freshened up the water in the birth pool, so it would be ready for A when she was ready. A little after 2am, I did another cervical check on A.  There had been no change since the last check four hours earlier.  I talked with A and H about their options, and they decided they would like me to artificially rupture her membranes.  At 230am, I ruptured A’s membranes, light meconium in the fluid.  Baby sounded great.  A decided she wanted to get back into the water. A began to feel very tired.  I encouraged her to lean into H and rest in between surges, to help build up the energy for the next one. As 330am neared, A began to spontaneously push with contractions.  As 4am neared, I checked and found her to be completely dilated except for a stretchy anterior lip.  I discussed with A about holding the lip back while she pushed to reduce it, and she agreed.  A handful of contractions later, the lip was reduced and baby was at a +3 station. At 4:27 am, everyone could see the head as A pushed.  Minutes later, the head began to crown.  A was in a semi reclining position, with H at her side, ready to help with catching his sweet baby. The head was birthed at 4:35, and one more surge brought the baby at 436am.  The baby had a nuchal cord that H and I somersaulted her out of, and H brought the baby to A’s chest.