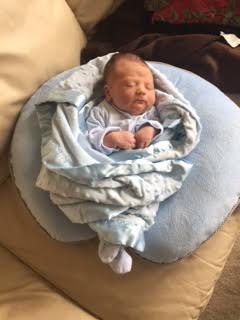 A and B started care with me in the third trimester of their first pregnancy.  They had been seeing an OB, but found that their OB was not supportive of their wishes.  Their childbirth educator recommended they talk to a midwife to help them get the birth they wanted.

A’s pregnancy progressed normally.  At her 38 week appointment, B and A talked about how the shift into a cold weather wave triggered the cows into labor, and they felt sure the same would happen to A.

Sure enough, two days later, they called to let me know that A’s water had broken.  The night had brought forth a cold weather spell, which seemed to trigger A’s water to break.

I encouraged A to take a shower, eat breakfast, and then come see me for an assessment and some herbs to help get contractions going.

A and B arrived a little after 11am.  A was not feeling any contractions yet, just some minor back pain.  All vitals were normal.  I did an exam and found her cervix to be 2-3cm dilated, 70% effaced, and baby at a -2 station.  I swept her membranes.  Baby seemed to be in an optimal position for delivery (LOA), and I estimated baby to weigh 8-8.5 pounds.  I had A drink my herbal tea blend, and encouraged them to go take a walk when they left my house.

A tried to nap, but it wasn’t long and the contractions began.  B sent me a text asking me to come at 6pm.  I arrived a little after 7pm, and found A to be contracting every 5 minutes, lasting 90 seconds.  A was walking around the house.

Mom and baby vitals were perfect.  I did a cervical exam at 730pm, and found A to be 3cm dilated, 80% effaced, and baby at a -1 station.  I was able to get some amniotic fluid pockets out, which seemed to strengthen contractions.

A sat on the birth ball and sipped on some herbal tea to help with contractions, but not much was needed.  Contractions soon ramped up in intensity.  In the 8pm hour, contractions were coming every 3 minutes, lasting 90+ seconds long.  A was feeling shaky and having a hard time feeling comfortable.  She switched her position frequently through out the next couple hours.

Waves of nausea came over A.  Peppermint oil seemed to provide some relief. A tried laying on her side, then walking, then sitting.  Trying to see if one position felt better than the other.

As 11pm neared, A was feeling the contractions differently. She was feeling some pressure.  We tried some herbs to help with relaxing, as A labored on her side on the bed.

Right before midnight I did another cervical check.  A was now 5cm dilated, 100% effaced, and baby was at a -1 station. Baby felt acynclitic, and there was some scaring on the cervix.  A agreed to allow me to “massage” the cervix through a contraction, which seemed to help open break it up.

A felt best laboring in her bed room.  Nausea picked up more, so I began dosing A with a homeopathic that helps with nausea and vomiting.  It seemed to do the trick after a couple doses.

Through the next few hours, I encouraged A to alternate her position in the bed.  Contractions were much stronger.  As 2am neared, we could see some bloody show on the chux, and A began making the comments that all women make when pushing is near.  The birth team and I took turns providing counter pressure and encouragement.

A began to spontaneously bear down at the peaks of the contractions as 3am neared.  A little after 3, A agreed to an exam.  She had an anterior lip, 100% effaced, and baby was at a +1 station.  A agreed to have me reduce the lip, and after two contractions, the lip was gone.

Little guy had gotten the wrong idea and turned from his perfect birthing position (LOA) to a straight sunny side up position (OP).  Four hours into pushing, sweet baby was not moving down.  I talked to B and A that I thought it was time to consider moving our birthing space to the hospital for baby’s safety.  They wanted to talk and walk around the house and see if gravity would move him at all.

At 745am, baby had not moved.  A and B agreed to transport.  I called ahead to the hospital and gave a report.  We left for the hospital at 810am, and arrived at 905am.

I had to leave A at 1035am to join another client in labor.  A had a phenomenal nurse who was working hard with her to help baby rotate and move down.  A couple pushes A had before I left showed a little bit more head under the pubic bone, which was a big improvement.  I encouraged B to call me with any questions or concerns.

Not long after I left, the OB came in and discussed doing a cesarean section.  JD was born earthside at 1158am, weighing in at 8lbs 5ozs, 21″ long!

A was beyond strong as she dug deep within her to listen to her body and find the strength to get through her very challenging labor journey.  I am blessed to have been part of this sweet family’s journey.