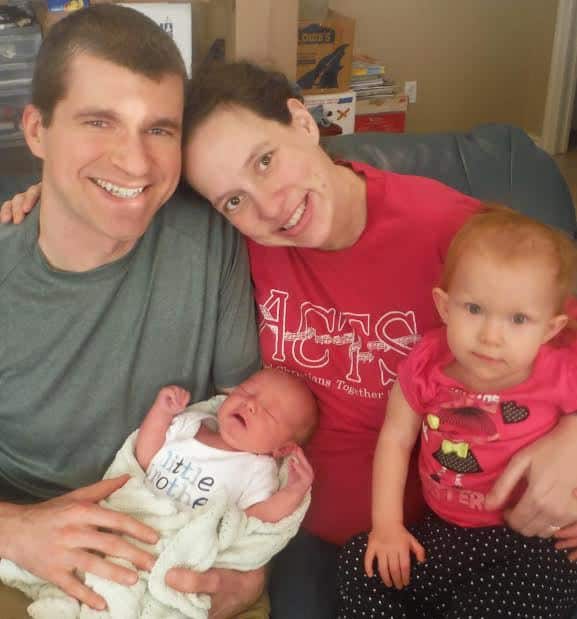 M and G started care with me in the first trimester of their second pregnancy.  M’s previous birth journey was a lengthy labor that ended in a surgical birth at 42 weeks.  She was planning a different birthing experience for this little one’s journey.

Three days before M’s estimated due date, she woke to stronger contractions.  Contractions continued through out the day, the spacing between varying.  I finished up at another delivery, and M sent a text letting me know that she had lost her mucus plug and with that brought contractions 5 minutes apart, and much stronger in intensity.

My birth assistant and I arrived at 945pm on December 18.  I found M to be sitting on her couch, breathing through a contraction.  M and G’s toddler was not agreeable to sleep so G was driving her around in an attempt to make her sleepy.  I did M’s vitals and found her and baby to be well.  M agreed to an exam at 1025pm.  Her cervix was 3-4cm dilated, 100% effaced, and baby at a -1 station.  I felt scar tissue on the cervix and talked to M about massaging the scar tissue through a contraction.  M agreed that it sounded like the best plan, and asked for a few minutes to have the time to refocus.

I massaged the scar tissue through a contraction at 1045pm.  M handled the procedure so well.  The scar tissue broke under my fingers, and I felt good that things were going to progress well from here.  I talked with M over her fears for this birthing journey.  After we finished talking, M asked to be left alone for awhile so she could refocus her breathing and energy.  M labored on her left side of the bed, working on getting centered.

Meanwhile, we hurried to set up the birth pool and get it filled with water.  I anticipated it wouldn’t be a very long time and M would be desiring the comfort of the birthing pool.

M came out of the room at 1119pm and sat on the couch.  She said the contractions were so much stronger since the massage.  As midnight neared, M found the start of contractions to be intense, but could get her focus on them for the rest.

M got into the birth pool a little after midnight.  She sat in the pool, leaning against the seat.  Contractions were coming every 3 minutes, lasting 90 seconds.  M stated she was starting to feel some rectal pressure at the peaks of the contractions.

Things intensified in the 1am hour.  M alternated between laboring on her hands and knees and semi reclining.  I encouraged her as she worked so well listening to her body, allowing the journey to happen.  I could see bloody show on the floor of the birth pool near 2am.  M was beginning to get primal at the peaks of the contractions.  I could tell it wouldn’t be long and we would be meeting this sweet boy.

M exclaimed, “It burns!” at 218am, and began to spontaneously bear down with contractions.  She asked me to check, and she was 10cm dilated with baby at a +3 station.

M did beautifully at bringing her baby closer and closer with each contraction.  In between contractions, M would laugh and joke with everyone.

I could see the head on the perineum at 239am.  I encouraged M as she eased the head further on the perineum, allowing things to stretch for the baby.  The head was crowning at 250am, followed by the baby at 251am.  I unlooped the nuchal cord from around the baby’s neck as G caught his sweet son and brought him to M’s chest.

Welcome to the world Peter, born earthside on December 19, 2016 at 251am, weighing in at 9.0 pounds, 21.5 inches long.  This woman did all the things she could to get her healing HBAC, and she did it!  It was such a privilege to serve this couple through their journey.